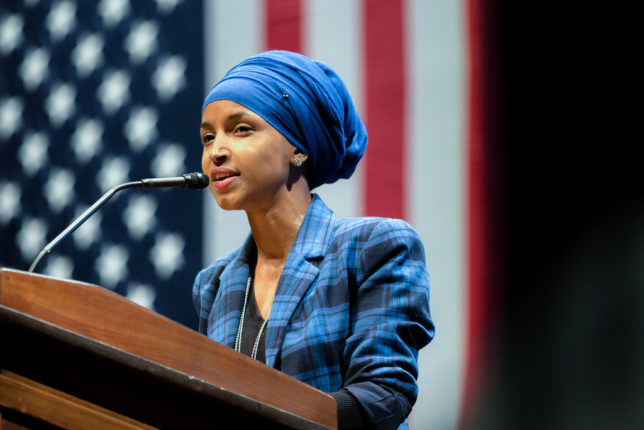 A few of the Democratic Party’s newly minted representatives are beginning to break away from the party’s consensus on Israel. Instead of supporting the U.S.’s ally in the Middle East, they are announcing their support for the boycott, divestment, and sanctions (BDS) movement, openly condemning Israel, and calling for the rest of the Democratic Party to join them. The rebuff of the previous status-quo on Israel seems to mark a shift further toward the left for the party, as candidates supported by the Democratic Socialists of America (DSA) are among some of the most ardently anti-Israel.

Earlier this week, incoming Michigan Democratic Rep. Rashida Tlaib told The Intercept she plans to lead a group of her colleagues on a tour of the West Bank, in an apparent rebuke of the AIPAC-sponsored tour of Israel given to newly-elected congressmen.

Tlaib reportedly told The Intercept that her planned tour of the West Bank will center around “Israel’s detention of Palestinian children, education, access to clean water, and poverty.” She continued:

I want us to see that segregation and how that has really harmed us being able to achieve real peace in that region . . . I don’t think AIPAC provides a real, fair lens into this issue. It’s one-sided. . . .  [They] have these lavish trips to Israel, but they don’t show the side that I know is real, which is what’s happening to my grandmother and what’s happening to my family there.

During her interview, Tlaib reportedly compared the conditions in the Palestinian territories to the United States during the Jim Crow era. In the interview, Tlaib elaborated on her support for BDS. She told The Intercept, “I personally support the BDS movement.” According to The Intercept, Tlaib said economic boycott movements, like BDS, bring attention to “issues like the racism and the international human rights violations by Israel right now.”

Tlaib has spoken openly about supporting other people’s activism in the BDS movement, often drawing on her own experience as a Palestinian, although she has never explicitly said she personally endorsed the cause until her Intercept interview. In an interview with In These Times, for instance, Tlaib said she stood “by the rights of people who support BDS” and said, if people had a problem with “freedom of speech” expressed to support BDS, they’re in the “wrong country.”

Tlaib recently defended former CNN correspondent and fellow BDS-supporter Marc Lamont Hill, who came under fire for quoting the phrase “from the river to the sea,” a slogan used by terrorist groups to call for the destruction of Israel. During Hill’s speech, he also derided people who allegedly “fetishize” peace and those who condemn violence by Palestinians.

Tlaib has repeatedly highlighted her support for Palestine during interviews. While speaking to the Huffington Post, Tlaib said she is “going to be a voice” for the Palestinians while serving in Congress. While speaking to In These Times, Tlaib said she does not support aiding Israel, so long as Prime Minister Benjamin Netanyahu is the leader. She accused him of instituting “apartheid policies.”

However, Tlaib’s espoused positions on Israel have been inconsistent.

Haaretz revealed that, before winning the Democratic primary, a senior advisor for Tlaib told the paper that the candidate supports a two-state solution to the Israeli-Palestinian conflict. After winning the primary, however, Tlaib said while speaking to In These Times that there “has” to be “one state.”

“Separate but equal does not work,” Tlaib continued. “I’m only 42 years old but my teachers were of that generation that marched with Martin Luther King. This whole idea of a two-state solution, it doesn’t work.”

In the same interview with In These Times, Tlaib also advocated for the Palestinian right of return, a controversial policy rejected by the U.S. government that would allow millions of Palestinians to return to their homes that were lost to their families during wars.

Tlaib is far from the only incoming House Democrat who has shown hostility toward Israel. Incoming Minnesota Democratic Rep. Ilhan Omar is also a supporter of the BDS movement and has made an array of comments condemning Israel and making ad hominem attacks against those who accuse her of anti-Semitism.

In 2012, Omar tweeted that Israel has “hypnotized the world” and hoped for “Allah” to “awaken the people and help them see the evil doings of Israel.” When confronted with the accusation that her tweet in May was anti-Semitic, Omar claimed that drawing attention to “the apartheid Israeli regime is far from hating Jews.” Omar also said the person who called her anti-Semitic is a “hateful sad man” and that she was “pray[ing] to Allah” for him to get help.

As with Tlaib’s views on a two-state solution, voters were misled about Omar’s views on BDS. Omar also appears to change her position on BDS depending on her audience. During a primary debate in August, Omar said the BDS movement is “not helpful in getting that two-state solution.” She also called the tactics of the BDS movement “counteractive.” Yet in November, Omar’s campaign told MuslimGirl.com, “Ilhan believes in and supports the BDS movement, and has fought to make sure people’s right to support it isn’t criminalized. She does, however, have reservations on the effectiveness of the movement in accomplishing a lasting solution.” Tlaib was one of the first people to rush to Omar’s defense after Omar came out in support of BDS.

It is not only Tlaib and Omar—the first two Muslim women elected to U.S. Congress—who have shared their disdain toward Israel. In a tweet in May, incoming New York Democratic Rep. Alexandria Ocasio-Cortez called Israel’s actions toward Palestinians a “massacre” and said, “Democrats can’t be silent about this anymore.” In July, during an interview with PBS, when informed by her interviewer that protests in Israel and Palestine are not just simply people expressing their First Amendment rights, because they often engage in violence, Ocasio-Cortez admitted that was true, then said, “I also think that what people are starting to see, at least in the occupation of Palestine, is just an increasing crisis of humanitarian condition. That, to me, is just where I tend to come from on this issue.” When pushed to explain what she meant by “occupation,” Cortez backtracked, saying, “Oh… um… I think what I meant is like, the settlements, are increasing in some of these areas and places where Palestinians are experiencing difficulty in access to their housing and homes.” Asked to give more details, Cortez clarified she is “not the expert on geopolitics” and laughed about not using the right words, since she is looking at things through a “human rights lens.”

In addition to their views on Israel, both Tlaib and Ocasio-Cortez were also darlings of the DSA. The DSA endorsed both candidates, and both proudly touted their DSA endorsements during their campaigns. It is not just a coincidence that the candidates endorsed by the DSA have anti-Israel views; the DSA’s official platform now includes support for BDS.

Another DSA-endorsed candidate who has condemned Israel and shown support for BDS is Democrat Julia Salazar, who was just elected a state senator in New York. Speaking to the Jewish Telegraphic Agency, Salazar discussed her support for BDS, how her time in the West Bank “informed” her “political evolution” on topics related to Israel, and how she understands “anybody participating in Palestinian solidarity feels that Israel is operating harmfully in the West Bank.” In her interview, Salazar refused to endorse a two-state solution.

As more elected Democrats harbor antagonistic beliefs toward Israel, the party will have to reckon with whether their party will maintain its pro-Israel platform. Progressive activists have already started to crumble, as the leaders of the Women’s March are beyond just being hostile toward Israel—they still refuse to condemn the openly anti-Semitic Nation of Islam leader Louis Farrakhan.