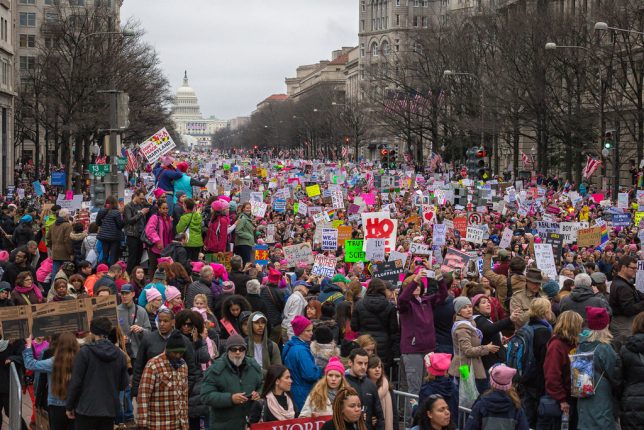 On Monday, Teresa Shook, the original founder of the Women’s March, called for the current leadership of the group to resign in light of their refusal to distance themselves from Nation of Islam leader Louis Farrakhan. In response, the Women’s March leaders and the official organization have condemned Shook for wanting to claim “credit” for the work of “women of color” and have trivialized her concerns because of her race.

In her post, Shook wrote that when creating the Women’s March, her “original vision and intent was to show the capacity of human beings to stand in solidarity and love against the hateful rhetoric that had become a part of the political landscape in the U.S. and around the world.” Shook explained she “wanted us to prove that the majority of us are decent people who want a world that is fair, just and inclusive of Women and All people.”

According to Shook, however, the current leadership of the Women’s March has “steered the Movement away from its true course.” Shook claimed she has waited for the leadership to change their ways, but they have instead “allowed anti-Semitism, anti-LBGTQIA sentiment and hateful, racist rhetoric to become a part of the platform by their refusal to separate themselves from groups that espouse these racist, hateful beliefs.” Therefore, Shook called for the current co-chairs of the movement to resign from their roles.

Shook’s remarks about the Women’s March comes days after the group and its leaders failed again to condemn Farrakhan. When confronted about Farrakhan’s history of anti-Semitism, the leaders of the Women’s March often accuse detractors of not understanding the nuance of the good the Nation of Islam has done for the black community. They also accuse people who mention Farrakhan of succumbing to a right-wing ploy to divide Progressive activists.

A Vogue article detailing the creation of the Women’s March explains Shook originally created the Facebook event page for women to protest in Washington, D.C., on inauguration weekend. Bob Bland and Vanessa Wruble also became involved. According to Vogue, “Wruble quickly recognized that Shook and Bland, both white, could not be the sole faces of the protest they were starting to organize.” Therefore, after reaching out to a friend, the group brought in co-president Tamika Mallory, board member Carmen Perez, and board member Linda Sarsour because of their races.

Wruble told Vogue, “I think I wrote, ‘You need to make sure this is led or centered around women of color, or it will be a bunch of white women marching on Washington. That’s not okay right now, especially after 53 percent of white women who voted, voted for Donald Trump.’”

Instead of addressing Shook’s concerns about the Women’s March leadership, the official Women’s March Facebook page issued a statement minimizing Shook’s involvement in creating the Women’s March and calling her remarks irresponsible. The group also asserted that she was trying to take credit for the work of “women of color” while making “armchair critiques”:

Today, Teresa Shook weighed in, irresponsibly, as have other organizations attempting in this moment to take advantage of our growing pains to try and fracture our network. Groups that have benefited from our work but refuse to organize in accordance with our Unity Principles clearly have no interest in building the world our principles envision. They have not done the work to mobilize women from diverse backgrounds across the nation . . .

We are grateful for people who HAVE been with us for the past two years, wrestling with the challenges and opportunities of what we are trying to build. Our ongoing work speaks for itself. That’s our focus, not armchair critiques from those who want to take credit for our labor.

Not content with letting the statement by the Women’s March stand on its own, Sarsour addressed the situation on her Facebook page minutes later, writing:

In the replies to her post, Sarsour attacked Shook as a “white woman who wants to take credit for women of color labor.” In another reply, Sarsour dismissed Shook’s concerns about the leaders’ anti-Semitism as “so absurd.” 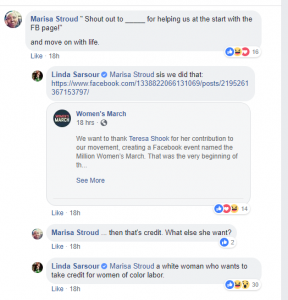 Carmen Perez shared Sarsour’s post on Faceook, adding, “And Linda Sarsour let’s not forget, we facilitated the process for the Unity Principals and housed the Women’s March in our organization, The Gathering for Justice and provided our ideology, Kingian Nonviolence….” In the replies, Sarsour wrote, “We gave them everything we had.”

In another post, Sarsour talked about a general “they” who seemingly have a problem with women of color leading movements and want to “try every tactic at their disposal to tear us down” while allegedly undermining the “labor” of women of color.

Mallory weighed in on Facebook as well, also talking about a general “they” taking things from women of color.

Despite all of the high-profile criticisms recently of the Women’s March, the leaders seem intent on making the movement about themselves.