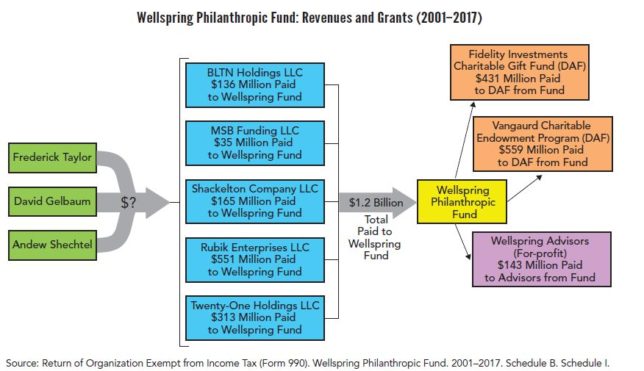 The TGS-linked funding pool is concentrated in one tributary in particular: the Wellspring Philanthropic Fund, which paid out an impressive $1.1 billion in grants between 2001 and 2017 (the latest available filing). But if you need more evidence that this multi-billion-dollar arrangement is byzantine by design, consider Wellspring’s original name: Matan B’Seter, Hebrew for “anonymous gift.” (It acquired its current name in 2016; notably, the word “wellspring” occurs three times in the Hebrew Bible and means “a source of continual supply.”)

The foundation was formed in 1999 in Roseland, New Jersey, making it one of the older TGS-spawned groups. Its articles of incorporation detail three trustees registered at a single address: senior attorneys from Lowenstein Sandler, and the law firm’s Roseland headquarters.

Unlike 501(c)(3) public charities and 501(c)(4) advocacy nonprofits, the IRS requires private foundations disclose their contributors. But you won’t find Shechtel, Taylor, or Gelbaum listed in its annual filings. Since 2001, all of the $1.2 billion in contributions to Wellspring Philanthropic Fund have come from five privately held limited liability companies with obscure names like BLTN Holdings and MBS Funding.

Almost no information about these LLCs is publicly available. From 2001 to 2017, they consistently gave Wellspring large cash donations. In 2011, BLTN Holdings donated a whopping $32 million is New York Stock Exchange-listed equity securities and in 2017 gave it another $9.4 million in Facebook and Netflix shares.

It’s a reasonable assumption that these five companies are shell corporations created to mask the identities of Wellspring’s true contributors—Shechtel, Taylor, and Gelbaum—since the companies were formed in Roseland around the same time as Wellspring itself. None appear to have any websites or employees. This also means it’s impossible to determine how much each of the men gave to Wellspring.

A DAF is a kind of charitable savings account run by a 501(c)(3) nonprofit. Donors—individuals, for-profits, or other nonprofits—gift money to the provider, which manages the funds until directed by the donor to grant it to another 501(c)(3) nonprofit. It’s a useful tool for many modest philanthropists to maximize their charity, with the added benefit of withholding their identity from public disclosure, since the money passes through a third party (the provider). Donor-advised funds have been criticized—particularly by those on the Left—as the “black boxes of philanthropy.”

If that’s true, the Wellspring Philanthropic Fund is the ultimate “dark money” machine in America.

In the first 18 years of its existence, Wellspring exclusively used DAFs to funnel almost $1.1 billion into the nonprofit sphere—money which, because it was channeled via donor-advised funds, can never be traced from Wellspring to its ultimate destination.

But in 2017, the foundation began making grants to individual, non-DAF organizations—giving over $28 million to explicitly political nonprofits, all of them left-wing.

Wellspring is also listed as a member of the Funders Committee for Civic Participation, an affinity group for some 90 wealthy and influential groups on the professional Left. The Committee—which is run by NEO Philanthropy, a Wellspring grant recipient—coordinates funding of voter registration and get-out-the-vote drives by other left-wing groups in the leadup to the 2020 Census. It also played a role in the Supreme Court lawsuit which nixed the Trump administration’s planned citizenship question on the 2020 Census. The Committee’s unique role as a coordinator, not a funder, makes it all but impossible to know how much Wellspring itself spent on such operations.

It’s also impossible to say which groups benefited from Wellspring’s wealth prior to 2017. Much of it could have gone to the kind of genuine charity—say, medical research—that Shechtel himself supports. Considering the overtly political groups it supported in 2017, though, a skeptic might not be convinced.

Curiously, Wellspring is identified as a “conduit foundation” in its IRS nonprofit filings for 2008, 2013, and 2014. That’s an unusual designation given by the IRS to fiscal intermediaries—pass-through groups—and is only applied to foundations which pay out 100 percent of what they earn in contributions.

In the next installment of Wellspring Philanthropic, learn more about Wellspring Adivsors, the network’s brain trust.