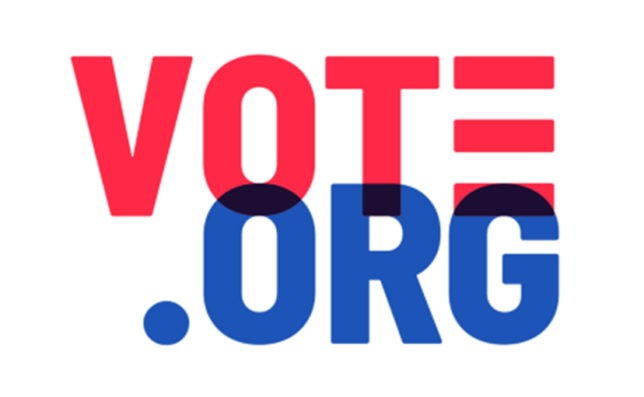 Under IRS regulations, nonprofit 501(c)(3) organizations can engage in voter registration and get-out-the-vote (GOTV) operations if they do so on a nonpartisan basis. They are prohibited from engaging in voter registration or GOTV efforts that either directly favor a candidate or party or “have the effect of favoring a candidate or group of candidates.” Despite these guidelines, Vote.org, a left-wing 501(c)(3) group, pushes the boundaries of what it can legally do as a tax-exempt organization.

Vote.org is an organization that claims to register voters and encourage turnout in a nonpartisan fashion. Vote.org states that it is the “largest 501(c)(3) nonprofit, nonpartisan voting registration and get-out-the-vote (GOTV) technology platform in America, with the goal of reaching historically underserved voters of color and underrepresented young voters.” While you may not have heard of this organization, you likely have heard of its partners, which include the NBA Players Association, the NAACP, and USA Today.

Through its website Electionday.org, Vote.org encourages companies to give their employees time off to vote, and it has convinced over 1,000 companies—including Twitter, Adidas, and Shake Shack—to sign a pledge promising to do so.

Vote.org’s main goal is to register voters and ensure they vote. It accomplishes this goal by using software which works in all 50 states to register voters or help them request a mail-in ballot. Through its work, Vote.org has had a massive impact on voter turnout and registration in 2020. Its 2020 Impact Report says the organization made 651 million voter contacts, registered 4.2 million voters, and helped send in 3.4 million ballot requests.

While Vote.org says it “does not support or oppose any political candidate or party,” the organization certainly leans left in its beliefs and statements. The organization showcased a picture of failed Georgia gubernatorial candidate Stacey Abrams in its 2020 report, and it specifically targets young and minority voters in its outreach rather than broadly reaching out to the general population. Vote.org advocated for the passage of the John R. Lewis Act, which would have effectively federalized elections in America, and it says on its website that mail-in voting, which has been heavily criticized for its lack of security, should be the standard method of voting. This stance is certainly one that Democratic activists are eager to enact.

Speaking of swing states, Vote.org made sure to note its effect in six key states that decided the 2020 presidential election: Arizona, Georgia, Michigan, North Carolina, Pennsylvania, and Wisconsin. It listed the number of voter registrations and voter contacts by Vote.org in the state and listed the margin of victory in each state. Joe Biden won all of them except North Carolina. This raises an important question: Why is a nonpartisan, nonprofit organization focusing its efforts on swing states and touting its successes during a crucial election in those states?

One of Vote.org’s tactics to drive voter turnout is serving food to voters on Election Day, specifically targeting areas that allegedly “have a history of voter suppression.” Their 2020 Impact Report says that they served 9,728 meals during the Georgia runoff.

The problem with food and drink is that we got a lot of complaints it was being treated as an end around of that law and campaigning in a polling place. Even if it wasn’t being used that way (and it sometimes was) it was giving off the impression to others at the polls that the food/drink was in return for voting.

He later explicitly mentioned food trucks, which Vote.org uses, as part of the problem.

While Vote.org claims it is nonpartisan, nearly all its activities seem designed to increase voter registration and turnout among Democratic voters. The organization not only explicitly targets likely Democratic voters in its outreach, but also proudly allies with other prominent left-wing groups. Furthermore, it has been on the front lines of legislative and legal battles at the state and national levels. Vote.org is acting like a partisan voter outreach group subsidized by taxpayers of all political views.

Vote.org highlights the problems of lax IRS enforcement in allowing 501(c)(3) nonprofits to engage in political activities such as voter registration and voter turnout programs. Members of Congress would do well by their constituents to investigate partisan election activities by 501(c)(3) organizations and to reconsider whether to prohibiting them from engaging in voter registration and other political activities.