The Face of Permanent Vote by Mail 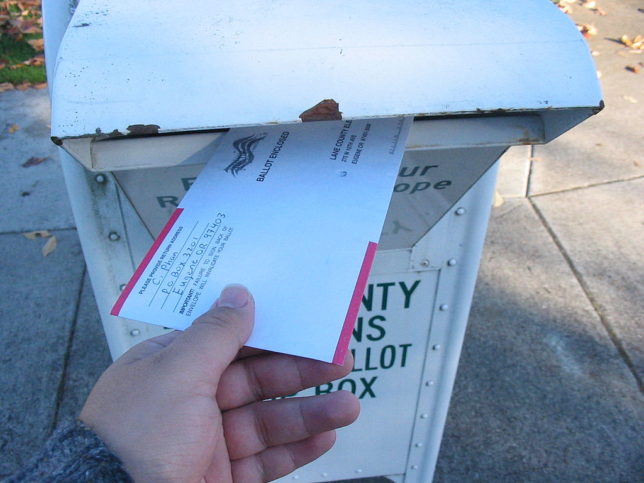 In 2020 Democrats fell in love with all-mail elections, believing they helped Joe Biden win the presidency. No wonder they are now trying to make vote-by-mail permanent. Take heed, America: Their victory would mean the end of free elections in America.

For most people, voting by mail is a convenience, as it was in particular during the threat of COVID-19. But to political activists, it’s a cynical way to enable ballot harvesting, fraud and get-out-the-vote operations targeting voters in places like Philadelphia and Atlanta.

We saw proof of that in the 2020 elections. More important, it wrenches control over how elections are run from the states and gives it to easily controlled federal bureaucrats and lawyers.

If one wanted to ensure they had control over vote-by-mail efforts, what’s the best way to do it? Simple: Seize control of the Postal Service, and everything else will fall into place. Thanks to a pyramid of partisan operatives led by the new face of all-mail elections, the partisan activist Amber McReynolds, leftists are doing just that.

Few Americans have heard of her, but McReynolds is the single most important reason the Democratic Party embraced vote-by-mail in 2020. Until last year, she ran the National Vote at Home Institute and Coalition, a pair of politically active nonprofits created to lobby for all-mail elections. The groups are funded by the postal workers’ union and Democratic mega-donor Stephen Silberstein, an advocate for dismantling the Electoral College.

In the months leading up to the 2020 election, Vote at Home helped at least 37 states hastily adopt vote-by-mail systems, including the Atlanta suburb of DeKalb County. It helped the Mark Zuckerberg-funded Center for Tech and Civic Life set up private drop boxes in key Democratic cities, many of which weren’t properly surveilled.

But Vote at Home reserved its most egregious activities for Wisconsin, where operative Michael Spitzer-Rubenstein effectively ran Green Bay’s election as the city’s “de facto elections administrator.” Spitzer-Rubenstein had private access to absentee ballots days before the election and asked the clerk if his team could “cure” faulty ballots, as they’d done in Milwaukee. The city’s Democratic mayor reportedly gave Vote at Home control over the state’s third-largest election, which — in the county clerk’s words — “went rogue” under private, partisan operatives.

The Wisconsin Supreme Court ruled those same drop boxes are illegal earlier this year, by the way.

At least two of Vote at Home’s operatives worked alongside the Leadership Now Project, formed by Obama administration alumni to trick conservative voters into supporting the left’s gerrymandering and vote-by-mail schemes.

But this was McReynolds’ plan all along — after all, she led Colorado’s adoption of all-mail elections in 2013 as head of Denver’s elections commission, where she claimed not to know the definition of illegal voting.

Ditto Vote at Home board member Phil Keisling, a former Oregon secretary of state and vote-by-mail advocate who has shared his vision of future elections.

“Imagine a state where voters never have to show a photo ID,” he said at Vote at Home’s kick-off event in 2017, hosted by the AFL-CIO. Keisling also supports automatic voter registration, a part of the Democrats’ “For the People Act.”

For her troubles, President Biden nominated McReynolds to the Postal Service board of governors in early 2021 as an “independent.” Why? By law, no more than five members of either party may serve on this critical nine-person board.

By presenting the decidedly partisan McReynolds as an “independent” during her 2021 confirmation process, the Biden administration quietly freed up a future Democratic seat, potentially gifting the party six seats and total control over the Postal Service in the near future.

Senate Democrats and their allies at Common Cause (a now-scrubbed Vote at Home partner) are gunning for Postmaster General Louis DeJoy, a Donald Trump appointee and vote-by-mail skeptic, using a “reform-minded majority” (read: partisan) to “fix Trump’s manufactured USPS crisis and fire DeJoy.”

Biden’s nominees to the board are uniformly in favor of “sweeping reforms” to the Postal Service that will transform the agency responsible for delivering your mail into a Democratic vote-harvesting machine.

In March, Biden asked Congress for $10 billion for “election infrastructure,” half of which would boost USPS’ capacity for mail-in voting “in underserved areas” (translation: rich with Democratic votes), including free postage for ballots for an agency that has lost money for the past 15 years.

McReynolds is no “independent.” Just 10 days before her nomination, Vote at Home’s website still showed partnerships with the left-wing groups Rock the Vote, Center for Tech and Civic Life, “dark money” Center for Secure and Modern Elections, and ACLU. One of Vote at Home’s allies, Uprising Strategies, is a Democratic consultancy whose co-founder, Nick Rathod, runs Beto O’Rourke’s Texas gubernatorial campaign.

Now McReynolds wants “federal standards” for elections “because it’s easy for bad actors to spread the wrong information because the rules vary so much by state.” That’s pundit speech in line with Biden’s proposed Disinformation Board, the left’s latest effort at state censorship. It’s meant to shut down debate, not protect Americans’ free speech.

“Americans are rightly concerned about Biden’s Ministry of Truth. We need faith and trust in our elections, not manipulation,” said Matt Buckham, co-founder of the conservative American Accountability Foundation, which has investigated McReynolds’ partisanship.

“Amber McReynolds led the charge for insecure mail in voting but called anyone with questions purveyors of ‘disinformation.’ The scariest thing is those accusations might soon carry the weight of federal power.”

We know the playbook: Supporting any measure that destroys election integrity and gives Democrats an unfair advantage while shutting down criticism. Republicans fell for it when they confirmed McReynolds last year. Will they fall for it again?

This article originally appeared in InsideSources on June 1, 2022.