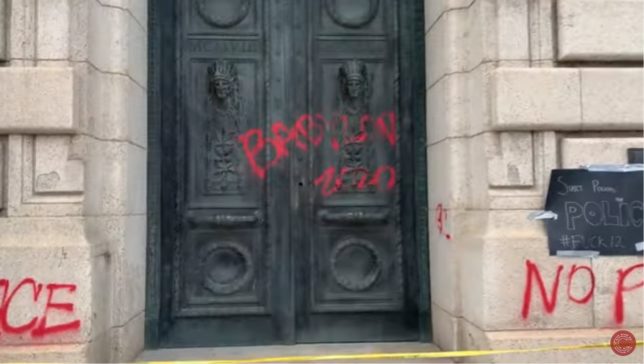 In BLM Aftermath: Cleveland, we look at what the 2020 demonstrations did to a city already familiar with economic devastation resulting from racial tension. In the wake of the protests, Cleveland voters implemented a policy of public safety oversight by a community-led board (over the objections of the city’s African American mayor and police chief), creating a situation that has led to an anemic police force and rising crime in the city.

BLM Aftermath: Cleveland features the original song “Shadows,” written by First Class Broadcasting (FCB) recording artist Aaron Malik. At the age of 13, Malik began his journey to accomplish his dreams as a hip-hop artist. He has been able to carve out his own niche as a key figure in what Cleveland.com called “Alternative Hip-Hop.” Unafraid to show his vulnerability as an artist while also maintaining the genre’s signature edge, Malik has seen success with songs like “Tempo,” “Worth It,” and “Uh Huh.” Signing with FCB Records in 2018, he has nearly a million total streams on Spotify, all while making a deliberate decision to rap without using profanity. Malik has also been featured in Cleveland.com, the Plain Dealer (Cleveland), and Rapzilla, among other outlets. His music was also featured on the runway at the 2019 Ohio Fashion Week.

The BLM Aftermath docuseries visits American cities that grappled with the 2020 protests and are now dealing with what was left in their wake once the clamor subsided. Black Lives Matter, Inc: Minneapolis Shakedown, the first installment featured Minneapolis, Minnesota, and the neighborhood where George Floyd lived and was murdered. It was featured on Fox News’s Primetime with Jesse Watters, in a podcast and articles at Just the News, and at other notable media outlets.

Visit BLM Aftermath to see both videos in the docuseries and to view the lyric video for Malik’s “Shadows.”