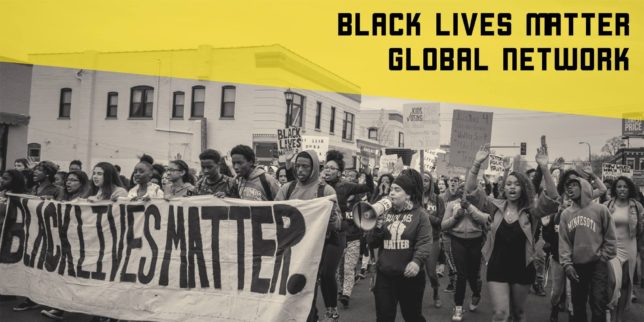 This is the second part of a two-part series on the organizational restructuring of Black Lives Matter. Read the first part here.

The year 2020 witnessed even more dramatic changes within the Black Lives Matter Global Network Foundation (BLM Global Network Foundation). The organization underwent a leadership change and experienced some internal turmoil related to its chapter structure. It created two new affiliate entities, switched fiscal sponsors, and had to decide what to do with the tens of millions of dollars in donations and grants that it suddenly had at its disposal.

Generally viewed as the preeminent national organization associated with the Black Lives Matter movement, the BLM Global Network Foundation operates the blacklivesmatter.com website and claims the movement’s three widely acknowledged co-founders—Alicia Garza, Patrisse Cullors, and Opal Tometi—as its own. Garza and Tometi are no longer directly involved with the organization’s operations, but they remain connected to the broader Black Lives Matter movement in other capacities.

Cullors, however, took on a central leadership role during the second half of 2020. She “assumed the role of Executive Director” in July, an act that was seen by some as a “a rebuke of its ‘leaderful’ structure, which gave every member an equal say and kept anyone—including a founder—from overreaching.” The move was later sharply criticized by 10 local Black Lives Matter chapters, who wrote in a joint public statement “It Is Time for Accountability” that “Patrisse Cullors, as the sole board member of BLMGN, became Executive Director against the will of most chapters and without their knowledge.”

Determining exactly how many local chapters there are and who they are is rather challenging. Screen captures from the Internet Archive’s WayBack Machine indicate there were 16 chapters in February 2020: 15 in the U.S. and one in Canada. By August there were 17 chapters: 14 in the U.S. and three in Canada. The “Chapters” page was apparently taken down in September. Ten chapters signed the “It Is Time for Accountability” statement in December, but only four of those were listed as official chapters in August. According to a 2020 Impact Report released in early 2021, 11 chapters received funding from the BLM Global Network Foundation in 2020, but some of them “are no longer . . . in our official network.” Five chapter reports were included in that 2020 Impact Report, with the anticipation that “dozens more” would be available in future years.

All of this is related to a major reorganization undertaken by the BLM Global Network Foundation during the second half of 2020. After deciding “to fully lean into its capacity as a fundraising body, grantmaking entity, amplifier, and action-oriented think tank of the movement,” the BLM Global Network Foundation spun off two new organizations: Black Lives Matter Grassroots and Black Lives Matter PAC.

Black Lives Matter Grassroots is intended to function as the assembly of official Black Lives Matter chapters, which will focus on “local, grassroots level work.” It has been characterized as the “activist arm” of the BLM Global Network Foundation, having been created “to support the organizational needs of chapters.” This new structure was highly controversial among some chapters, however. In their “It is Time for Accountability” joint statement, 10 chapters asserted that Black Lives Matter Grassroots “does not have the support of and was created without consultation with the vast majority of chapters” and that “[its formation] effectively separated the majority of chapters from [BLM Global Network Foundation] without their consent.”

Black Lives Matter PAC was publicly announced in October 2020, reflecting a recognition that “transforming the world requires both protest and politics.” In partnership with the left-wing Working Families Party, it contacted 5.4 million voters in eight states during the 2020 General Election. It claims that 44 of its endorsed candidates and measures were successful, including U.S. Representatives Cori Bush (D-MO), Jamaal Bowman (D-NY), and Nikema Williams (D-GA). Black Lives Matter PAC also participated in the dual 2021 U.S. Senate runoff elections in Georgia in favor of Democrats Raphael Warnock and Jon Ossoff, which were both elected.

The BLM Global Network Foundation began 2020 as a fiscally sponsored project of Thousand Currents, a 501(c)(3) nonprofit that had served as its sponsor since 2016. But as CRC first reported in July, that sponsorship was transferred to the Tides Center, one of a group of related left-of-center nonprofits that had combined 2019 revenues in excess of $800 million. Even more interesting, perhaps, is an Associated Press report from February 2021 revealing that the BLM Global Network Foundation had been granted its own IRS tax-exempt status in December 2020. This means that going forward it will be required to file Form 990 returns with the IRS.

Those returns will provide considerable detail on the organization’s finances. But for now, the most comprehensive fiscal picture available comes from its recently released 2020 Impact Report. According to that report, it raised approximately $90 million in 2020 “across our entities and partners,” incurred $8.4 million in operating expenses (this includes those of both the BLM Global Network Foundation and Black Lives Matter Grassroots), and paid out $21.7 million in grants. Black Lives Matter PAC raised $1.05 million from October through the end of the year and spent a combined $746,000 in the general election and in the Georgia runoffs.

Aside from these top-line numbers, the most notable financial revelations from the report were the organizations to which the BLM Global Network Foundation gave grants. Eleven local chapters received funding in 2020, alongside 30 other groups that each received “a six figure grant.” The grants seem to have prioritized sexual orientation and gender identity: “Of the 30 organizations selected, 23 of them are led by Black LGBTQIA folks and/or directly serve these communities.” A full list of grant recipients can be found on the InfluenceWatch profile.

As with the Movement for Black Lives, comprehensive data on foundations and other nonprofits that gave to the BLM Global Network Foundation in 2020 will not be available until those organizations file their respective IRS Form 990s for that year—and only to the extent they identify those grants (technically made to the fiscal sponsor) as having been so designated. As 501(c)(3) nonprofits, neither the BLM Global Network Foundation nor its fiscal sponsors are required to publicly reveal the identities of their donors, and the 2020 Impact Report does not voluntarily disclose this information. It does state that the average donation “via our main fundraising platform” in 2020 was for $30.64.

A Much More Potent Movement

The Black Lives Matter movement ended 2020 as a much more potent force than when the year began. Its newfound sociopolitical influence is best reflected in the vast sums of money that organizations associated with the movement took in over the course of the year—most prominently the BLM Global Network Foundation.

Black Lives Matter is almost certain to continue playing a major role in American politics, especially within the Democratic Party and across the Left more broadly. Hence, it will become increasingly important to understand how the principal entities associated with the movement are organized, who leads them, and (to the extent possible) their donors and financials. Hopefully, this will help avoid a repeat of the significant public confusion that plagued the movement and its observers in the past.

Read the first part of this series here.