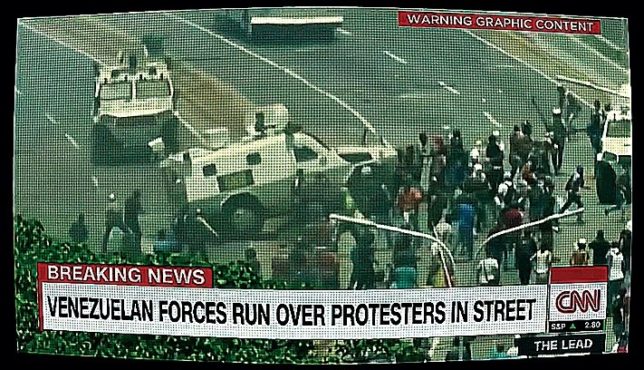 Summary: Andrés Guilarte, former college student in Venezuela, has experienced the failures of Venezuela socialism firsthand. Since coming to the United States, he has worked hard to warn American college students about the dangers of socialism. CRC’s Sarah Lee has recently interviewed him for Capital Research magazine.

The young Venezuelan Andrés Guilarte has witnessed the death spiral of socialism firsthand. Only a few years ago he was a young college student, spending his time on campus protesting those repressive regimes. Then he found a way to leave and make his way to the United States. His college experience is a far cry from what most young Americans experience. But if they’re not very careful, warns Guilarte, they could begin to experience what Guilarte and his friends did in Venezuela. And every day he works to prevent that in America.

In fact, after coming to Washington, D.C., in 2019, to work as an intern for the Cato Institute, he has devoted much of his time and work to traveling the country as part of The Fund for American Studies (TFAS) to warn American college students—who have begun their own slow and steady embrace of socialism as part of their studies—of exactly what it means to live under a socialist system.

And Guilarte knows first-hand. As a member of Estudiantes por la Libertad (Students For Liberty Latin America) as well as other anti-Maduro groups, Andrés’ studies were regularly interrupted by government officials wielding tear gas against Guilarte and his fellow students on campus. He served as a coordinator of that group from 2015 to 2016 and a senior leader from 2016 to 2017. It was dangerous work, he says.

When he came to the United States, things were calmer. But he knew he was called to continue the work he had started in Venezuela, and TFAS—which holds regular education events throughout the nation and has a long history of battling socialist philosophy itself—gives him the perfect forum to continue his work without the tear gas.

TFAS’s overarching goal is to educate college students about American government, politics, and economics. But they also have affiliated institutes throughout the world, including in Greece, Hong Kong, Prague, and Santiago, Chile. So Guilarte, who brings real-world experience of life under a socialist regime that has led through the iron fist of nationalization, is a great fit for TFAS in educating college students away from the strange predilection for socialism many learn on college campuses from their radical professors.

And Guilarte takes his work very seriously because, as he says, by the time you’re really worried socialism may be taking hold, it’s already too late. So he’s attempting to help students here, who believe in an innocuous system that seeks economic equity through redistribution via government mandate, understand exactly what they’re advocating.

He recently spoke with CRC about his efforts.

SARAH: I understand you were involved in political activism in Venezuela before you came to the U.S. Can you tell me about those groups, what they did, and if it was dangerous? And what ultimately brought you to the United States?

ANDRÉS: Yes, I was part of Students for Liberty Venezuela, a worldwide network of college students that pursue the values of liberty. I also was part of Vente Venezuela, the only political party that speaks about capitalism. But mainly I was involved in the political student movement from my university, where we organized the protest against the Maduro regime while also working to improve the quality of college campus life for students.

It was incredibly dangerous, I was part of three organizations that the regime always targets, so it was always difficult. The risk of being detained was always there. After graduating in 2018, I applied for an internship at the Cato Institute and thankfully I was selected. So I came to the U.S. in January 2019, and while I was doing the internship, the crisis in Venezuela exploded to a whole new level. So because of my political experiences back in my country and the new ones in the U.S., I decided to apply for asylum.

SARAH: My understanding is that your mother’s story pre-Chavez plays a huge role in where you find yourself today, fighting to liberate Venezuela from Maduro’s influence. Can you explain more about how your mother’s experience inspired you?

ANDRÉS: My mom was born in the mid-1960s She came from a very humble town before moving to Caracas. She was never able to finish high school because she had to find a job to provide for the family. My sister was born in the mid-1980s and me in the mid-1990s. We never knew our fathers, so my mom without formal education and being a single mom, she was fully able to support us with the full support of the rest of our family. So for me, it is a terrific example of how someone in that economy without education was able to do all the things my mom did. That always motivated me to improve myself, and when the crisis in Venezuela got worse, I also saw how it crippled my mom’s life, which she worked so hard to have. It just adds to the motivation that in order for her to have a better life, the regime has to disappear.

In the next installment of Venezuelan Socialism, learn why he worries about socialism in the United States.