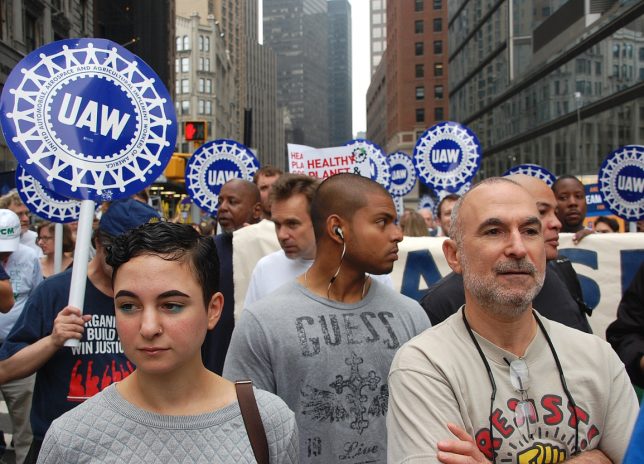 In one sense, it is the same old story: The United Auto Workers, seeking a foothold in the “transplant” car manufacturing industry that has established itself in the mostly right-to-work southern states in past decades, tried to unionize the Volkswagen plant in Chattanooga, Tennessee. Despite the company’s “neutral” position, workers rejected the UAW by a close margin. It happened before in 2014, and last week, it happened again. Despite shifts that suggested the union had a good shot at overturning 2014’s 53 percent to 47 percent deficit, the UAW lost, 51.8 percent to 48.2 percent.

Before going into the how and why of the workers’ win, consider what the pro-union “environmental” shifts were. First, there is Tennessee politics: Chattanooga is in Hamilton County, a historically Republican municipality. But in the 2018 midterms, Hamilton County was far less Republican than it had been in 2014: While Sen. Lamar Alexander (R-TN) won 64 percent of the vote in Hamilton County in 2014, Sen. Marsha Blackburn (R-TN) only won 50.2 percent of the vote in 2018. And in both the U.S. Senate and gubernatorial races, Hamilton switched its partisanship relative to the state as a whole—while in 2014, it voted more Republican than the state; in 2018, it voted more Democratic. Given that the UAW’s political committees and employees contribute 99.6 percent of their federal contributions to Democrats, the shifting partisan winds should have helped the union along.

But changing politics were not even the most favorable trend for the UAW. An improving economy can increase union organizing and union militancy (strikes and similar industrial actions) under certain circumstances, which observers have noted in the past few years. While good times can make employees content, other workers feel freer to pressure employers when they do not fear job loss. The bill is, of course, paid after the business cycle inevitably turns: Unionized workplaces suffer from inflexibility and above-market costs, which can lead to crisis in hard times. Likewise, excessive union militancy can contribute to an economic downturn if it sufficiently disrupts the orderly flow of commerce, as it did in the United States immediately following World War II.

So, with a more favorable political climate and an economic climate amenable to union activity, the United Auto Workers really should have won. But workers rejected it anyway. The union, naturally, blames federal labor law—specifically the Taft-Hartley Act, the labor law authorizing right-to-work states, barring economically ruinous secondary strikes, and recognizing employers’ rights to non-coercive discussion of the consequences of unionizing.

In the unions’ view, putting the question of whether to unionize to a private vote and allowing employers to offer opinions on the question to their employees makes winning too darn hard, despite the fact that unions won 69 percent of National Labor Relations Board certification elections in 2018 (the last full year for which data are available). To rig the organization process even more in their favor, unions and union-aligned Democratic politicians seek to obliterate Taft-Hartley with the PRO Act, which would be the largest expansion of union power and privilege since the Wagner Act of the 1930s. It would give unions access to private employee contact information, override secret-ballot elections based on the decisions of bureaucrats, and repeal all right-to-work laws, forcing employees who do not want union representation to pay for it anyway.

Other potential culprits seem more plausible. First, the UAW has not had the cleanest period in its history: a major corruption scandal in the UAW’s Fiat Chrysler division that federal investigators unraveled over the past few years led multiple former UAW officials and employees to plead guilty to various offenses. And while former UAW president Dennis Williams might assert that “There’s just no truth to the allegation that the terms of the collective bargaining agreement were compromised,” Volkswagen employees might have been skeptical of the accuracy of that claim.

The other potential cause of the UAW’s loss is that the union simply isn’t necessary. Production worker wages and benefits exceed the local median; workers might rationally decide that paying UAW dues and signing on to the UAW’s agendas just is not worth it.