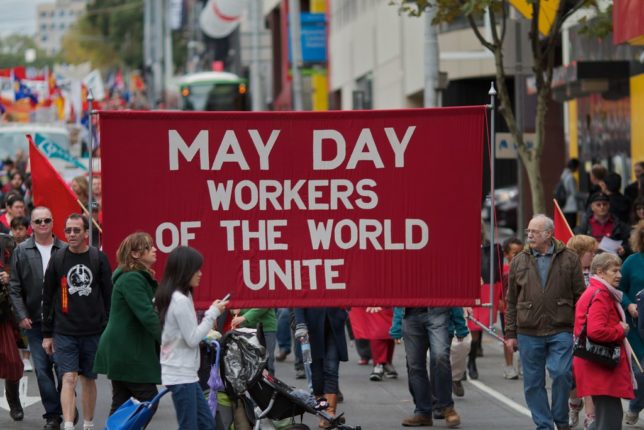 May Day March in Melbourne. Workers of the World Unite.
by Michael Watson

With May Day approaching and socialism on the march in the United States, one would expect good cheer in the senior leadership of the United Auto Workers, once led by the famous (democratic) socialist Walter Reuther. Instead, they’re hiring defense attorneys and handing their members an object lesson in what happens when government-endorsed syndicates get in bed with bureaucratic interests.

The story began in 2009, when the Obama administration arranged a shotgun marriage between the bankrupt automaker Chrysler with Italian carmaker Fiat—along with a federal bailout. That arrangement created Fiat Chrysler Automobiles (FCA). Provisions in the merger ensured that the United Auto Workers (UAW) union that organized the Chrysler workers would keep its position organizing the workers of FCA. At the time, numerous commentators noted that this arrangement was effectively a government payoff to the UAW, which had spent $13.1 million in the 2008 elections, almost exclusively supporting Obama, his fellow Democrats, and then-U.S. Senator Arlen Specter of Pennsylvania, who became a Democrat after the election.

Sometime around or shortly after the 2009 merger, FCA vice president Al Iacobelli, one of the company’s top labor relations officials, allegedly used a slush fund involving a union-management training center to bribe union brass—while profiting himself. Iacobelli pleaded guilty to involvement in the scheme, which prosecutors argued were “an effort to buy labor peace” while allegedly securing goodies for Iacobelli including a Ferrari 458 sports car and Montblanc pens worth tens of thousands of dollars.

Jerome Durden, one of Iacobelli’s accomplices and head of the training center, pleaded guilty to offenses related to falsifying tax returns for the worker center and another nonprofit implicated in the scheme. Federal prosecutors alleged that Durden and others misappropriated $4.5 million intended to support the education and workforce training of UAW members.

So, the government-arranged motor-vehicle mega-conglomerate’s agents were selling influence. But were labor’s advocates buying? Of course they were. Like socialist apparatchiks throughout history, union officials were more than willing to be kept “fat, dumb, and happy” at the expense of the working people they claimed to serve.

One of the UAW’s top Fiat Chrysler negotiators—a man responsible for standing up for workers while hashing out a contract with Iacobelli and other FCA officials—was the late union vice president General Holiefield. He allegedly took kickbacks with reckless abandon, including $262,000 to pay off his mortgage. Holiefield’s wife pleaded guilty to tax offenses allegedly relating to the scheme.

What about Holiefield’s colleagues and superiors? In total four UAW officials, most prominently former union vice president Norwood Jewell, have already pleaded guilty to offenses related to the wide-ranging federal probe of the union. And the former president of the national union, Dennis Williams, has reportedly been implicated, though not yet charged.

But so what? So a few bad apples might have taken some money they didn’t deserve from a cookie jar that wasn’t theirs. As Williams asserted in 2018, “There’s just no truth to the allegation that the terms of the collective bargaining agreement were compromised” by the scheme.

Perhaps Williams is correct, and the mutual-enrichment scheme serving representatives on both sides of the Fiat Chrysler-UAW negotiation table had no effect on the contract that was signed on it. One wonders if the workers represented by the UAW would agree.