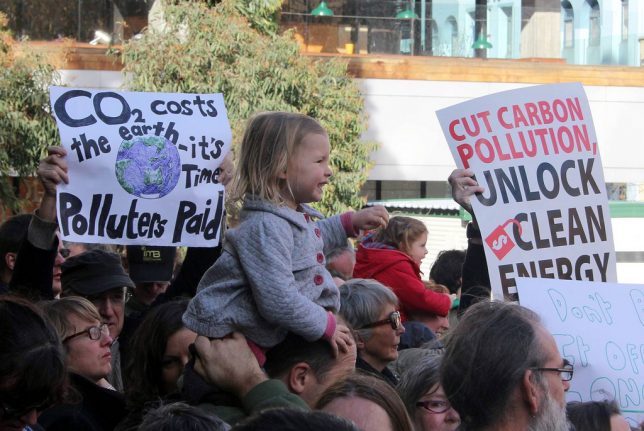 On World Environment Day, 5th June 2011, tens of thouands of people rallied around Australia to say Yes to a safe climate and in support of a carbon price. An Estimated 10,000 people crowded onto the lawns of the State Library in Melbourne to listen to speakers and music in a familly friendly rally with lots of placards, banners and beanies on heads.
by Daniel Lauer, Hayden Ludwig

Last year, Prime Minister Justin Trudeau’s Liberal government ordered the country’s provinces to enact their own “carbon pricing systems” or “the government of Canada will implement [read: mandate] a price in that jurisdiction.”

Four provinces have done so, and the economic forecast isn’t pretty. By the time the carbon tax hits its legislated rate of $50 per metric ton in 2022, emissions taxes—and the inevitable passing on of expenses from businesses to consumers—are estimated to cost families anywhere from $603 to as much as $1,120 in extra energy bills each year, depending on where they live. But the pain doesn’t end there. Ratchet the rate up to $100 per metric ton, some experts say, and the cost to families could reach a staggering $2,240 each year.

And Canadian energy prices were already high, before Trudeau’s intervention. In a recent study, the Canadian Fraser Institute found that “almost one-tenth of Canadian households [put] 10 cents of every dollar towards electricity, natural gas, and other forms of energy” in 2013—a full four years before the creation of a carbon tax.

Canada’s carbon tax is set to take effect next year, but the results are already so dire that on August 1, Trudeau’s government was forced to scale back taxable emissions on businesses to stop an exodus of capital investment. According to the Wall Street Journal, foreign direct investment in the country dropped 56 percent from 2013 to 2017, primarily due to new taxes and strict environmental regulations. Instead, energy and manufacturing companies are increasingly turning their attention to the United States, where tax cuts and deregulation under the Trump administration have made Canada’s southern neighbor more appealing to investors and producers.

If Canada’s self-inflicted carbon tax offers any lesson for America, it’s that the idea of a “conservative carbon tax” is a contradiction in terms—a top-down edict is as authoritarian as it is inefficient. As retired University of Virginia atmospheric physics professor S. Fred Singer put it in 2017, a carbon tax is “a useless solution to a nonexistent problem.”

While the tax itself may or may not be more efficient than a cap-and-trade system, savvy leftists have come to view it as uniquely marketable to Republicans. A carbon tax, after all, can be sold as “revenue-neutral” to fiscal hawks. It doesn’t necessarily require new government agencies to set up, so it’s a “small government” solution. And a carbon tax doesn’t ask conservatives to advocate full-throated environmentalism, only a little prudence.

As Hudson Institute scholar Irwin Stelzer wrote in the right-of-center Weekly Standard: “Conservatives can maintain their skepticism about global climate change, but that does not mean that a bit of prudential action might not be appropriate should it turn out that carbon emissions are indeed having a negative effect on climate.” And what’s the harm in inoculation?

Take it from the left-wing magazine Mother Jones, which conducted an interview with eco-activist Jessica Fernandez earlier this year:

When trying to engage other Republicans on green issues, she [Fernandez] quickly learned that an alarmist attitude just doesn’t work.

What approach does work? A focus on money. Fernandez said that conservatives are more likely to respond positively if you say, “Hey! Fixing the climate is something that can benefit you economically.”

While it’s difficult to measure the effectiveness of this money-first strategy, it has certainly won some converts. That said, the prospect of a U.S. carbon tax seems far-fetched in a Republican-controlled Congress—even with the recent Curbelo carbon tax proposal. In July, Rep. Steve Scalise (R-LA), the Republican Party Whip, introduced a resolution in the House of Representatives “expressing the sense of Congress that a carbon tax would be detrimental to the United States economy.” Only six House Republicans voted against the resolution (another voted present).

The Scalise resolution revealed a deep distaste for carbon taxation among Republicans on Capitol Hill. That hasn’t stopped a small-but-persistent clique of conservatives from proposing one, however. But what would a supposedly “conservative” carbon tax even look like?

In March 2015, a report entitled “The Conservative Case for a Carbon Tax” was published by Jerry Taylor, a global warming activist and founder of the nominally libertarian Niskanen Center in Washington, D.C. In the report, Taylor argued that “conservatives should make a carbon tax a centerpiece of their environmental policy agenda” instead of continuing to debate the merits of man-made climate change:

For a paper meant to convince skeptics, Taylor’s paper doesn’t spend a lot of time explaining why a carbon tax is a good thing or why they should start believing in global warming—just that the alternatives are worse.

“Conservative hostility to proposals to address global warming is often stated as a matter of principle,” he wrote, “a defense of free markets and private property against unwarranted government regulation. But those principles would be better served by well-crafted government action”—a carbon tax. According to Taylor, that’s the only sensible solution to stop global warming, since the alternative would surely be the kind of “command-and-control regulatory regime” most conservatives fear the Left would create (such as cap-and-trade). And since the government is going to do something, he contends, why not do it in a free market way?

If Taylor’s name sounds familiar, it’s probably because he used to be vice president of the libertarian Cato Institute and a self-described “warrior” for climate change skepticism. “I used to write skeptic talking points for a living,” something he now plainly regrets. “I also introduced one of my brothers, James Taylor, to the folks at the Heartland Institute,” Taylor complained in a 2017 interview with the left-wing Intercept, referencing the group famous for advocating alternative empirical approaches to climate science. “Heartland’s rise to dominate market share in climate denialism largely occurred under my brother. Boy do I regret that.”

As the saying goes, there’s no greater fanatic than a convert. Since leaving Cato in 2014 to establish the Niskanen Center—a think tank funded by the Tom Steyer-supported Energy Foundation and the scandal-ridden Silicon Valley Community Foundation—Taylor has become an evangelist for global warming theory and a planet-saving carbon tax. Where once he astutely pointed out in the aftermath of the Kyoto treaty that “politics—not science—is increasingly driving [the] debate” around greenhouse gas emissions, Taylor today contends that “the case for climate action is now so strong that one would be hard-pressed to find a serious academic economist who opposes using market forces to manage the damage done by greenhouse gas emissions.”

Taylor thinks he has the solution: a $65 tax per ton of carbon dioxide by 2022, rising to $296 per ton in 2045, a plan proposed by the Stanford Energy Modeling Forum to confine global warming growth to 2 degrees Celsius. “The total cost to the economy,” Taylor cheerfully wrote in January 2017, “would be less than 0.2 percent of GDP.”

Taylor’s essentially cost-less estimate is, to be charitable, optimistic. To put it in perspective, the Curbelo proposal set a $24 tax per ton of carbon dioxide starting in 2020—a level the Competitive Enterprise Institute projects would raise the average household’s annual expenditures for gas and utilities by over $1,000. Even a $20 per ton carbon tax would shrink the size of the economy by 0.8 percent, according to the Tax Foundation, costing Americans 425,000 jobs and raising taxes by $1.3 trillion over a decade.

But give credit where credit’s due. Taylor’s is a more honest approach to climate change than many alternatives which propose lower tax rates on emissions—arguably an effort to moderate their position. By calling for a $65 per ton tax, he’s staked out a firm position—albeit one which would threaten to tank the American economy. The left-wing Carbon Tax Center, for example, has said a $50 tax per metric ton—twice the rate of Curbelo’s bill—is just “the threshold of robustness” for an anti-global warming plan.

In the next installment of The Myth of a Conservative Carbon Tax, proponents of a carbon tax try to dress up wealth redistribution.