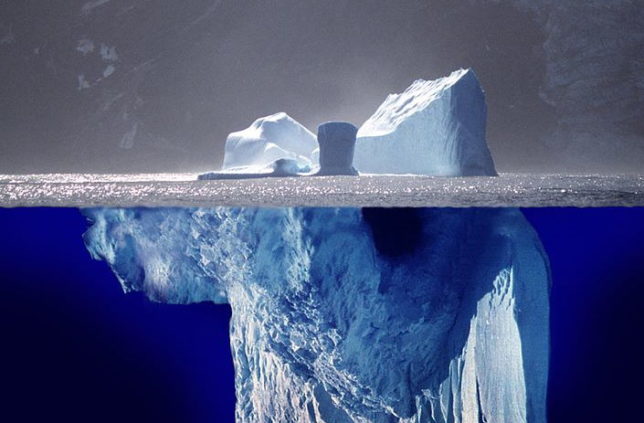 A photomontage of what a whole iceberg might look like. Credit: Uwe Kils and Wiska Bodo. License: Creative Commons.
by Hayden Ludwig

Pro-abortion groups brought in $2.2 billion in 2019, and environmental activists spent $2.4 billion that same year. But what about the “dark money” groups that bankroll them?

We examined the finances of the four biggest, most influential pass-through funders we’ve discovered: Arabella Advisors, the Tides Nexus, NEO Philanthropy, and the Proteus Fund. What we found is staggering: In 2019 alone these top “dark money” empires brought in $1,685,410,741. (We used Form 990s for 2018 for NEO Philanthropy Action Fund and Proteus Action League in lieu of their missing Form 990s for 2019.) Lest anyone think that 2019 was just a good year for these groups, including receipts back to 2014 increases that total to an incredible $6,475,703,303.

What Is “Dark Money”

Why do we label these groups “dark money” funders? “Dark money” is a political term with no official definition—and many left-wing groups use that vagueness to criticize any free speech spending they want to muzzle. However, CRC senior fellow Michael E. Hartmann provides some clarity by identifying it with 501(c)(4) advocacy nonprofits, which are permitted to engage in a limited amount of partisan political campaign activity and lobbying and aren’t required to publicly disclose their donors.

Very often these (c)(4) groups operate alongside one or more 501(c)(3) nonprofits (called “public charities” by the IRS) forming a (c)(3)-(c)(4) pair or network with overlapping leadership, shared staffers, the same agenda, and sometimes even clever expense reimbursement schemes to funnel money between the groups. So it’s fair to call networks whose (c)(3) arms support their (c)(4) action arms “dark money” groups, since they’re really just two sides of the same coin.

Pass-through groups rarely generate their own money, relying instead on big outside funders (particularly foundations) whose funds are then pooled together and repackaged as grants to activist and lobbying groups—hence, the term “pass-through.”

Case in point: Arabella Advisors is a consulting firm that manages a set of four in-house nonprofits that together brought in $731 million in 2019 alone and over $3 billion since 2006. While Arabella is perhaps most infamous for its legion of “pop-up” groups—websites meant to look like actual activist organizations, such as the pro-court-packing Demand Justice—it’s also a pass-through giant. Each year Arabella’s nonprofits funnel hundreds of millions of dollars into groups such as the North Fund, which sponsors the “51 for 51” campaign for DC statehood; America Votes, a leading get-out-the-vote group for Democrats; and Accountable.US, a former Arabella “pop-up” that recently got into trouble with Congress for trying to blacklist former Trump administration officials.

Then there’s the Tides Nexus, our name for the myriad nonprofits associated with the Tides Foundation, a venerable left-wing funder created in 1976 and arguably the originator of the pass-through model. The eight Tides groups perform a number of services for the professional Left, such as providing office space and administrative support for start-up activist groups (many of them incubated by the Tides Center). It’s also a major funder of the pro-illegal immigration group UnidosUS, the voter registration group State Voices, and the environmentalist EarthJustice, among others.

Similarly, the Proteus Fund and Proteus Action League are small pass-through groups that were instrumental in bankrolling the gay marriage movement a decade ago and the current pushes for abortion-on-demand policies and the abolition of the death penalty.

A pair of smaller pass-through funders, NEO Philanthropy and the NEO Philanthropy Action Fund, have their roots in the 1970s and Ralph Nader’s Public Interest Research Groups (PIRGs), which lobby for a higher minimum wage and environmental regulations. NEO specializes in funneling money to dozens of efforts to register left-leaning voters and block voter ID laws. NEO also runs the Funders Committee for Civic Participation, a platform for massive left-wing donors such as George Soros’s Open Society Foundations to strategize their funding of groups involved in tilting the 2020 Census (and the 2021–2022 redistricting process) to favor Democrats.

This is just the tip of the iceberg, but it begins to reveal the oceans of money available to the professional Left. If there’s one thing leftists have in abundance, it’s “dark money.”