Joseph Stalin would be proud. 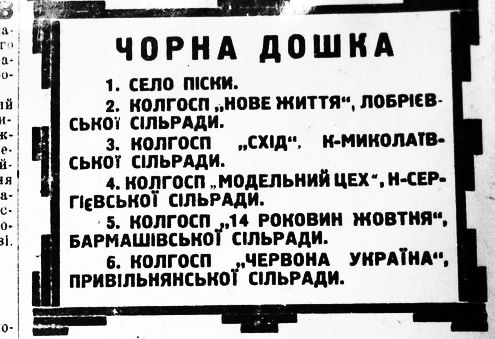 A "blackboard" or "black list" published in the newspaper "Under the Flag of Lenin" in January 1933 identifying specific collective farms in Ukraine and their punishments—part of the manmade famine orchestrated by Stalin. License: Wikipedia.
by Hayden Ludwig

A congressional committee has caught a cabal of left-wing agitators attempting to blacklist former Trump administration officials, among them activists from the $731 million “dark money” empire run by the consultancy Arabella Advisors in Washington, DC.

In February, the House Committee on Oversight and Reform, the House’s main investigative body, began an inquiry into a smear campaign run by two leftist groups with overlapping boards and close histories: American Oversight and Accountable.US. Together they run the attack site CorporateComplicity.org (archived here).

The website claims the Trump administration “tore our government apart,” “shredded norms, violated the rule of law, waged war on facts,” and “incite[d] a mob attack at the U.S. Capitol” on January 6. Therefore, major corporations “have an obligation” not to hire officials who served under President Donald Trump. The activists also threaten these companies with action if they hire any ex-Trump staffer, writing ominously, “There are some lines that simply cannot be crossed—and the public will be watching.”

You should demand clear, evidence-based answers to whether a former official participated in enabling, crafting, implementing, or defending a concerted effort to shatter democratic norms and spread hate. . . . However strong the opposition, your words are meaningless unless they are backed up with resolute action.

Government service does not guarantee private employment. In fact, it should not. And American business should not reward the behavior of the Trump administration with the well-oiled revolving door that traditionally spins at moments of transition.

We call on you to make it clear that you will not hire for employment, contract for consulting, or seat on your boards any senior-level official from the Trump administration that has participated in undermining our democracy, endorsing violent extremism, or tearing families apart. Senior officials who did so must not be allowed to cash in on the devastation they’ve wrought through high-paying speaking fees, consultancies, book deals, or jobs in the boardrooms and corner offices of our nation’s businesses [emphasis added; full letter archived here].

This is a radically undemocratic, Stalinist attack by leftists who want to punish Republicans for serving their country, and the Oversight and Reform Committee’s letter points that out. The American Oversight Accountable.US campaign “focuses solely on blacklisting former federal government officials solely because they worked for the President of the United States. . . . They are trying to deny Americans the opportunity to earn livelihoods simply because they made the sacrifice to serve on behalf of the President.”

Barring and banning public servants from reentering civil employment has no place in American political discourse. As President Biden said in his inaugural address, “[f]or without unity, there is no peace, only bitterness and fury . . . unity is the path forward.” The Campaign Against Corporate Complicity does just the opposite of what President Biden encouraged by treating allegedly political opponents as targets to be destroyed. In American Oversight’s campaign, these “political opponents” are public servants with a spectrum of backgrounds, experiences, and views—some are only “guilty” of being Republicans [emphasis added; full letter archived here].

The committee has demanded American Oversight and Accountable.US turn over:

Accountable.US is a former project of the New Venture Fund, a major 501(c)(3) funding and fiscal sponsorship nonprofit. The New Venture Fund is also the flagship of a $731 million “dark money” network centered on Arabella Advisors, a consulting firm that caters to left-wing mega-donors. It specializes in churning out “pop-up” groups like Accountable.US, which savage Republicans on every issue imaginable, but the pop-ups don’t file Form 990 reports, disclose their donors, or even exist in the IRS nonprofit rolls because they’re little more than activist websites.

The self-proclaimed “government corruption watchdog group” appeared in 2019 and left the Arabella fold in 2020 when it obtained independent 501(c)(3) tax status. It took with it three other Arabella “pop-ups” created to attack the Trump administration—Restore Public Trust, Allied Progress, and Western Values Project—which are continuing their “dark money” activism under the Accountable.US banner.

American Oversight was formed just months after Trump’s inauguration in 2017 to launch numerous litigation campaigns against Republicans. As of writing, the group has filed at least 158 FOIA complaints beginning in April 2017, the most recent in December 2020, one month before Trump left office. These FOIA cases harassed numerous departments for copies of all text messages and communications from administration officials regarding its response to the coronavirus, directives placing Attorney General Bill Barr in charge of the federal response to the killing of George Floyd in May 2020, the 2020 Census, and emails between Secretary of State Mike Pompeo and his wife. They also include boatloads of complaints that American Oversight’s prior requests had not been sufficiently met in a timely manner.

Both Accountable.US and American Oversight are run by professional activists and Democratic Party stooges. Three of the former’s board members have ties to American Bridge 21st Century and Citizens for Responsibility and Ethics in Washington (CREW), two leading anti-Republican harassment groups formed by Republican turncoat David Brock. At least one of its senior advisors, Melanie Sloan, also advised the Arabella/Accountable.US pop-up Restore Public Trust.

Kyle Herrig, a New Venture Fund board member, leads Accountable.US and sits on American Oversight’s board. Another board member with Arabella ties is Brad Woodhouse, who leads the Arabella pro-Obamacare pop-up Protect Our Care and formerly worked for the Democratic National Committee (DNC), both of Barack Obama’s presidential campaigns, American Bridge 21st Century, and Health Care for America Now, which organized the Left’s strategy to pass Obamacare in 2010.

Together these groups highlight the tentacles of the Left, with networks upon networks creating incestuous webs dating back decades. What should be clear is that these two groups are more like siblings than allies, created by the same set of professional activists to harry and destroy the presidency of Donald Trump and ensure that no one who supported him has a future in business or government.

If that doesn’t chill you to the bone, it’s because you haven’t realized they’re coming for you next.