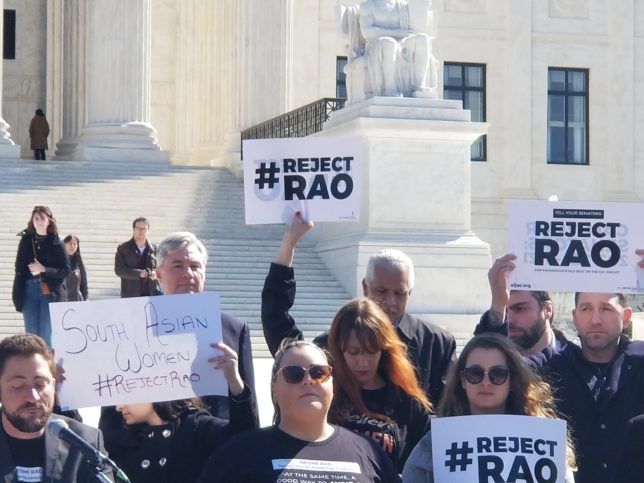 Protesters representing a handful of left-wing organizations gathered Tuesday at the Supreme Court in Washington, D.C. to oppose the confirmation of Judge Neomi Rao to the D.C. Circuit Court of Appeals. Should she be confirmed, Rao would be filling a seat left vacant by Justice Brett Kavanaugh.

CRC’s Hayden Ludwig and Harry Kazenoff identified a number of groups at the protest: 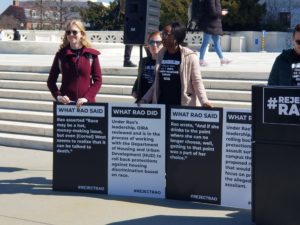 They talk about President Roosevelt being rebuked for ‘packing the court,’” Takano said, referring to Franklin Delano Roosevelt’s 1937 attempt to expand the number of sitting justices on the Supreme Court in order to pass his New Deal legislation.

Well, you know what? Have you heard of ‘a switch in time saved 9?’ The threat that he [Roosevelt] was going to generate public sentiment to do that—the judges changed their minds.

Ahead of the Rao protest, CRC uncovered a document detailing the list of professional activist groups that had published videos, statements, and letters denouncing Rao as one of “the most extreme Trump judicial nominees pending in the Senate.” (The document is available to view at InfluenceWatch.org.)

Also listed were the judicial protest groups People for the American Way, Alliance for Justice, and Demand Justice—groups that CRC identified in previous Supreme Court protests such as those against Justice Brett Kavanaugh. 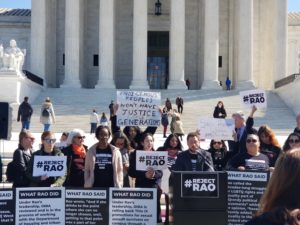 According to InfluenceWatch, Demand Justice “aims to influence the political leanings of America’s courts by supporting the appointment of liberal judicial nominees and opposing right-of-center nominees” (InfluenceWatch is a project of the Capital Research Center). Demand Justice is a project of the Sixteen Thirty Fund, a multi-million dollar “dark money” giant profiled by CRC for hosting dozens of “pop-up” protest groups opposing conservative policies.

The Alliance for Justice (AFJ) accuses Rao of being “dangerously extreme,” claiming she “believes in blaming [rape] survivors.” AFJ, a spin-off of the American Civil Liberties Union, is an advocacy organization heavily funded by George Soros’s Open Society Foundations and the family of liberal investor Warren Buffett.

CRC also uncovered the website StopRao.com, an attack site bearing resemblance to other websites purchased by left-wing groups ahead of President Trump’s July 2018 announcement of his nominee to replace Justice Anthony Kennedy’s seat on the Supreme Court. Prior to the announcement, left-wing protest groups purchased the websites StopKavanaugh.com and StopBarret.com, referring to judges Brett Kavanaugh and Amy Coney Barrett on Trump’s shortlist of Supreme Court nominees.