The main coalition backing the bill is ‘Act for Women,’ a front for the Center for Reproductive Rights (CRR), a pro-abortion litigation group which brought in close to $32 million in 2020. 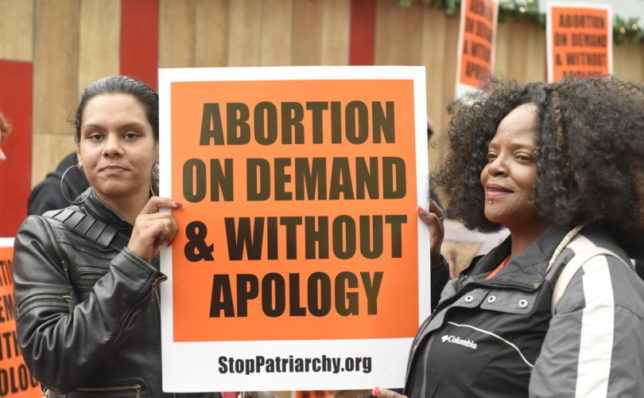 In case you missed it: House Democrats just passed the most expansive federal abortion access bill in American history, with plenty of help from professional activists.

All but one Democrat, Rep. Henry Cuellar (TX), voted for the so-called Women’s Health Protection Act of 2021 (H.R.3755), which narrowly advanced to the Senate on partisan lines last week.

The bill is doomed to fall far short of the 60 votes needed to overcome a Republican filibuster, but it offers a glimpse into leftists’ fear of a conservative majority on the Supreme Court overturning Roe v. Wade. Take it from Speaker Nancy Pelosi (D-CA), who announced that their goal is “codifying Roe v. Wade.”

The legislation would overwrite state abortion restrictions like the “heartbeat bill” recently passed in Texas, which requires that a physician first check for a heartbeat and bars him from aborting the fetus if he detects one.

But like virtually everything backed by radicals, it goes far beyond abortion into the bizarre netherworld of “reproductive justice” — combating “systems of oppression, lack of bodily autonomy, white supremacy, and anti-Black racism,” as well as “enslavement, rape, and experimentation on Black women.”

Leftists ought to know a thing or two about experimenting on black women, considering that Planned Parenthood-funded groups are testing second-trimester abortifacients on poor African women, often with lethal results. And speaking of systemic racism, your tax dollars are helping USAID, the government agency responsible for foreign aid, to distribute close to $1 billion to fund population control schemes in Africa and Asia.

Activists aren’t really concerned with those things. But hey, at least they’re working tirelessly to overturn unjust restrictions on everyone “capable of becoming of pregnant” — you know, like “transgender men, non-binary individuals,” and mentally ill individuals “who identify with a different gender.”

The bill is less a legislative achievement than a victory for the lobbying groups yanking the Democratic Party ever further to the left, and it shows us who’s really in control of its policy agenda.

The main coalition backing the bill is “Act for Women,” a front for the Center for Reproductive Rights (CRR), a pro-abortion litigation group which brought in close to $32 million in 2020.

If that seems like a lot of money for suing conservative states, remember that professional activism doesn’t come cheap — CRR president Nancy Northup might be the best-paid abortion activist in the country, raking in $552,000 in 2020 (a cool $265 per hour). Good thing donations to her group are tax-deductible!

Like other left-wing coalitions, Act for Women is hardly single-issue and includes a host of groups from the institutional Left (full list here). Besides the National Abortion Federation, NARAL, and the National Organization for Women, I’ve identified 23 gay rights and “feminist majority” groups are backing the abortion bill, including the LGBT litigation nonprofit Lambda Legal and the National Center for Transgender Equality.

At least 90 faith-based groups endorsing the bill, which on the Left includes everything from Jewish women’s groups to the National Coalition of American Nuns to the American Humanist Association. The Left’s top litigation groups have all signed off, including the ACLU and Alliance for Justice, the latter involved in organizing countless protests of Trump administration judicial nominees.

I’ve also counted a few forced-depopulation groups — the Population Institute and Population Connection, founded by 1970s apocalyptic doomsayers as “Zero Population Growth” — and even a group that advocates for legalized prostitution (“Women With a Vision”).

I’ve calculated that pro-abortion groups brought in $2.2 billion in 2019, mostly from foundations funded by America’s wealthiest “philanthropists.” Warren Buffett has poured at least $4 billion into these groups over the past two decades, probably making him the most lavish funder of abortion advocacy in world history.

All that money buys a lot of clout with the top ranks of the Democratic Party.

Many pundits believe that the Women’s Health Protection Act is unlikely to gain the vote of West Virginia Sen. Joe Manchin, supposedly a moderate, pro-life Democrat. Let’s not forget that Manchin has posed for pictures with Planned Parenthood activists holding a sign stating “I Stand With Planned Parenthood.”

Fealty to abortion-on-demand is a litmus test in the world’s oldest political party, even in moderate states like Virginia, where Attorney General Mark Herring is running for reelection this year by boasting that he’s “a brick wall against Republican attacks on a woman’s reproductive freedom.”

When it comes to abortion, there are no more moderate Democrats—professional activists have made sure of it.

This article originally appeared in the Giving Review on September 29, 2021.