The Future of the Two State Solution 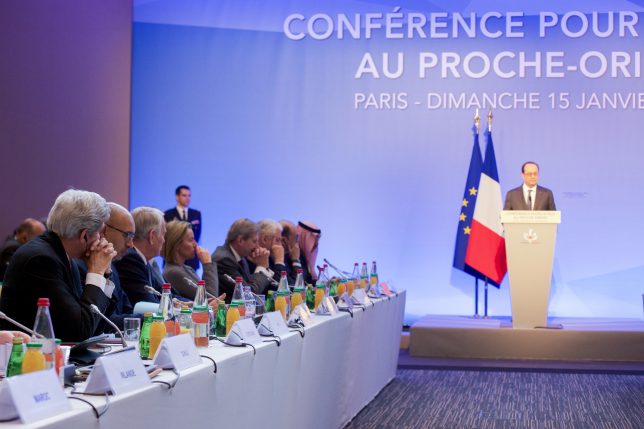 Few sentences can shock the world as much as President Trump’s comment, “I thought for a while the two-state looked like it may be the easier of the two, but honestly, if Bibi [Israeli Prime Minister Benjamin Netanyahu] and if the Palestinians, if Israel and the Palestinians are happy, I’m happy with the one they like the best.” This statement is in direct contrast to the declaration that world leaders proclaimed in Paris at the Initiative for the Middle East Peace Process on January 15, 2017.

Some of these treaties have been good: In 1783 the United States of America had its independence recognized by Britain, and the famous 1815 Treaty of Paris ended the Napoleonic Wars and allowed Europe to be peaceful for almost a hundred years. But more recently, so-called peace treaties have not provided the results the signers sought.

Several treaties signed in the aftermath of World War I were flatly rejected by some countries (for instance, Turkey and the Treaty of Sèvres), or led directly to World War II (the Versailles Treaty). After World War II, Paris peace treaties in 1947 were intended to allow the governments of non-German European nations to have “the enjoyment of human rights and of the fundamental freedoms.” Yet Romania, Bulgaria, and Hungary wouldn’t follow those standards as they became communist satellite governments of the Soviet Union.  In 1973, the Paris Peace Accords followed the United States’ withdrawal from Vietnam, which led to Communist North Vietnam invading and subjugating South Vietnam. Two years ago, the Paris Climate deal received much cheering from the Left for taking on the big issue of global warming, even though the agreement’s own advocates said it would make only an infinitesimal difference in world temperatures. Last month, the world gathered in Paris to deal with, we are told, the biggest problem facing the Middle East.

Yet the biggest problem facing the Middle East isn’t the refugee crisis, the Syrian Civil War, ISIS, women’s rights, gay rights, war in Afghanistan, Iranian expansion, Saudi Arabia’s involvement in Yemen, Kurdish statehood and terrorism, Iraq, or even Egypt’s future government. The main problem is where the international Left places the blame for all the troubles of the Middle East: Israel.

The meeting at Paris discussed a two-state solution for Israel and the Palestinians. The diplomats want Israel to end its occupation of “Palestinian” territory that began in 1967 and to have both sides live in peaceful coexistence. The leaders at Paris also called for improved “economic cooperation” and “increased private sector involvement” for Palestine. The third and final goal is for both sides to show a “genuine commitment to the two-state solution” and not to “prejudge the outcome of negotiations on final issues, including, inter alia, on Jerusalem, borders, security, refuges, and which they will not recognize.”

Translation:  Israel, it is your fault there is no peace; go back to your defenseless borders and maybe the Palestinians will just drop their stated goal from the beginning of this conflict in 1947, namely, the destruction of your country.  It’s fascinating that those who demand a two-state solution say Israel must go back to the pre-1967 borders, because if Israel agreed to those borders, a Palestinian nation would not gain even an inch of ground.

Yes, if the whole world agreed to a 1966 Middle East map, Palestine would still not exist. The nations that would gain territory would be Syria, Jordan, and Egypt. After Israel won their independence in 1949, the remaining parts of Palestine—primarily the West Bank and the Gaza Strip—were annexed by Jordan and Egypt.

The two state-advocates fail to mention that Israel has returned to a pre-1967 border in recent decades. In 1967, Israel controlled all of the Sinai Peninsula, which allowed Israel further access to the Red Sea and the Suez Canal. By 1980, Israel had given it all back to Egypt. For money? No. For political influence? No. The only thing Israel received was recognition for the right to exist from the Egyptian government. Israel now has stable relations with both Jordan and Egypt, the only neighboring countries willing to recognize Israel’s right to exist. History has shown that Israel trades land for recognition, yet those in Paris today ignore that fact and continue to demand that Israel put itself at risk for a delusional peace effort that endangers the nation’s long-term existence.

Even two-state advocates likely understand, privately, that the hope of a lasting peace between Israel and the Palestinians is moving farther and farther away. Palestine has not existed as a nation since 1949. This may explain the desperation of those who support the two-state solution: Few people alive today remember a nation of Palestine, and the clock keeps ticking. Soon, asking Israel to stop building settlements on the West Bank will be as ridiculous as saying, “Arizona needs to stop construction in that state because the land used to belong to Mexico.”

A new year in Paris, a new treaty, but the same failure.

Tyler Stone received a Bachelor’s Degree from Le Moyne College, where he studied history. He is currently Office Manager at Capital Research Center.