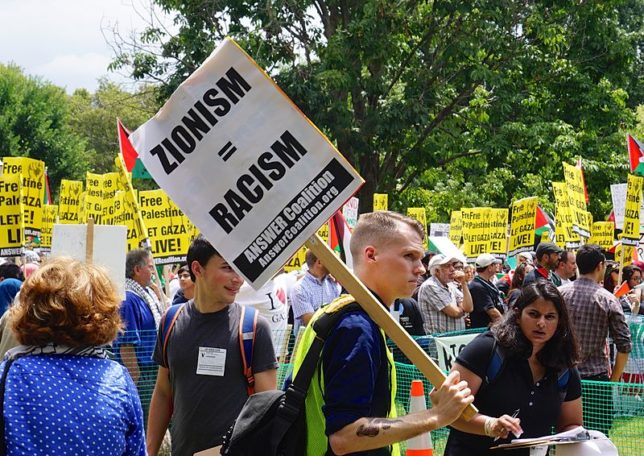 Last week, Rep. Ilhan Omar (D-MN) shared an article from a far-left anti-Zionist website to attack Batya Ungar-Sargon, the opinion editor of the left-of-center Jewish publication The Forward. But behind what looks like a case of the extreme anti-Israel Left sharing its own attacks on traditional liberals lies the influence of a controversial ex-political candidate: Ron Unz, funder of numerous anti-Jewish and anti-Israel organizations and conspiracy theorists.

On August 19, Omar retweeted an article posted by left-wing activist Alexandra Halaby (whose Twitter bio reports affiliations with the Carter Center and the Bernie Sanders-associated advocacy group Our Revolution) from the left-wing, pro-Palestinian website Mondoweiss. The post features a photo of Ungar-Sargon and accuses her of using “disingenuous antisemitism charges” in its headline. (After tweeting the story Omar shared, Halaby said in the same thread that Jews in Israel should return to Russia.) 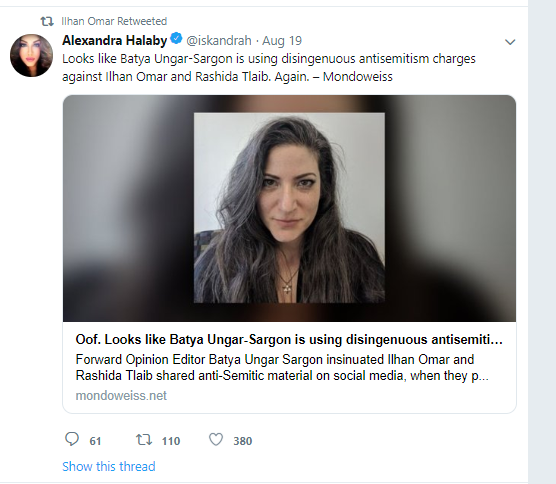 Ungar-Sargon criticized Reps. Omar and Rashida Tlaib (D-MI) for sharing a comic created by an artist, Carlos Latuff, who won second place in the 2006 Iranian International Holocaust Cartoon Contest. (Ungar-Sargon was not the only liberal to share the same image: Rep. Jerrold Nadler (D-NY), the leader of Democrats’ impeachment efforts against President Trump, did as well.) Ungar-Sargon’s rather mild criticism (she did not, in fact, call the comic itself anti-Semitic at the time of Mondoweiss’ publication) still drew the attacks from the virulently anti-Israel website.

While Mondoweiss is definitively left-wing (the website says it “grew inside the progressive Jewish community”), it has received funding from Ron Unz, a prolific funder of anti-Jewish, anti-Israel, and outright racist “researchers.” From 2010 to 2012, Mondoweiss received more than $80,000 from Unz’s eponymous foundation: in 2010 it received $40,000, in 2011 it received $20,000, and in 2012 it received $20,000. In 2014, the Center for Economic Research and Social Change, of which Mondoweiss is a project, also received $10,000 from the Unz Foundation.

Unz, who made substantial money in the banking industry, is a onetime mainstream-to-liberal California Republican known for challenging Gov. Pete Wilson (R-CA) from the left on immigration in 1994 and sponsoring English-language education ballot initiatives. He later began to fund “contrarian” extremists of right and left before making a number of their views his own.

Through his Unz Foundation, Unz funded a number of anti-Israel commentators and political activists who would become the intellectual forefathers of the extremist “alt-right.” From 2008 through 2014, the Unz Foundation-funded Steve Sailer, a writer (who now blogs for Unz’s “Unz Review” website) whose views of immigrants and non-white Americans stray very close to outright eugenics. Unz’s foundation supported Philip Giraldi, executive director of the Council for the National Interest, an anti-Israel foreign policy advocacy group founded by the late ex-Rep. Paul Findley (R-IL), a man who described himself as “[Palestine Liberation Organization terrorist Yasser] Arafat’s best friend in Congress.” (Last year, the left-of-center nuclear disarmament funder and Obama Iran deal “echo chamber” funder Ploughshares Fund forced a board member to resign for sharing a conspiratorial piece by Giraldi with the headline “America’s Jews Are Driving America’s Wars,” published at Unz’s website.) The Foundation also funded Paul Craig Roberts and his Institute for Political Economy; the former Reagan administration economist has since endorsed Holocaust denial and 9/11 “Truther” conspiracy theories.

The Unz Foundation supports extremsts on the far-left beyond Mondoweiss. For instance, the Unz Foundation gave $185,000 to CounterPunch, a magazine and website founded by Marxist (and, naturally, anti-Israel) journalist Alexander Cockburn, between 2007 and 2015. (CounterPunch has published Paul Craig Roberts’ writing.) The Unz Foundation also gave $10,000 to If Americans Knew, an anti-Israel group which praised Unz and falsely accused Zionists of collaborating with Nazis.

Unz’s foundation provided six-figure funding to the American Ideas Institute, the parent of the Bush-era dissident-conservative American Conservative magazine co-founded by Pat Buchanan, and Unz himself was the magazine’s publisher until he left in 2013 after a spat with then-editor Daniel McCarthy. While Unz funded extremists for some time before then, he maintained public distance from their writings: During a failed 2016 campaign for the Harvard Board of Overseers he told the Harvard Crimson: “A lot of these people I financially support are those on the ideological fringe, and many of them say all sorts of outrageous things I don’t necessarily agree with.”

That distance, if it were ever real, no longer appears to exist with respect to openly anti-Jewish sentiments. Throughout 2018, Unz wrote a series of anti-Semitic and Holocaust denial articles on the Unz Review. In July 2018, Unz wrote “Oddities of the Jewish Religion,” an article about anti-Semitism that made a number of assertions about Judaism and Jewish religious practices, such as a claim that “religious Jews apparently pray to Satan almost as readily as they pray to God.” In the same piece, Unz appeared to embrace the medieval anti-Semitic blood libel—the lie that Jews use Christian blood to make matzos. He wrote, “It appears that a considerable number of Ashkenazi Jews traditionally regarded Christian blood as having powerful magical properties and considered it a very valuable component of certain important ritual observances at particular religious holidays.” In August 2018, Unz wrote, “I think it far more likely than not that the standard Holocaust narrative is at least substantially false, and quite possibly, almost entirely so.” The Anti-Defamation League noted further incidents of anti-Semitic writings by Unz.

It is hard to determine what exactly drove Unz from being a moderate-on-immigration otherwise-conventional Republican (Unz tried to primary-challenge Gov. Pete Wilson over Wilson’s support for a law that attempted to restrict public benefits for illegal immigrants) to writing tracts of anti-Semitic rhetoric. However, his prior support for extremists of left and right suggests that the old warning that becoming involved with bad people may lead one to take on their worst characteristics continues to have merit.