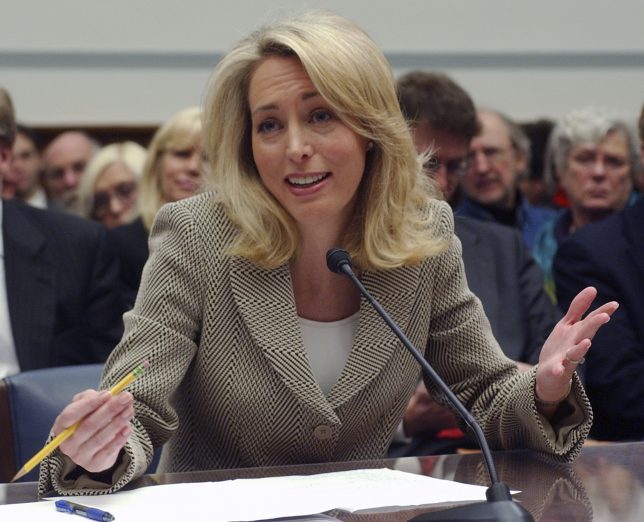 Update: Over the weekend, Plame resigned from the Ploughshares board.

Valerie Plame Wilson (née Valerie Plame), a former Central Intelligence Agency employee whose identity became a cause célèbre among opponents of the George W. Bush Administration after State Department official Richard Armitage revealed it, embroiled herself in controversy today when she Tweeted a link to an anti-Semitic article on the alt-right website Unz.com. The headline? 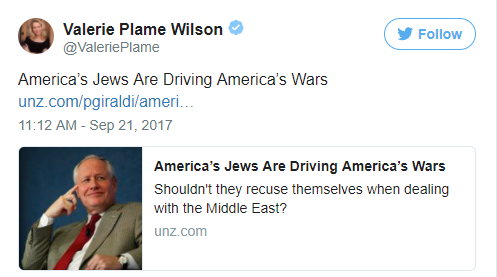 The article (which I won’t link) is just as disgusting as its headline suggests. The Washington Examiner notes that it “asserted, among other things, that Jews ‘own the media,’ that Jewish people should wear labels while on national television, and that their beliefs are as dangerous as ‘a bottle of rat poison.’” Plame then attempted to explain away her actions by appearing to all-but-endorse the article in a subsequent series of Tweets, asserting:

First of all, calm down. Re-tweets don’t imply endorsement. Yes, very provocative, but thoughtful. Many neocon hawks ARE Jewish.

Just FYI, I am of Jewish decent. I am not in favor of war with Iran, or getting out of the Iran nuclear treaty. There are simply too many who are so ready to go to war. Haven’t we had enough for a while?

Read the entire article and try, just for a moment, to put aside your biases and think clearly.

And while Plame later attempted to assert that she hadn’t read the piece and claimed she now recognized that the site was “Problematic AF,” she has a history of sharing anti-Semitic and anti-Israel conspiracy theories written at the same site by the same author. Her “apology” and denials are, to put it mildly, implausible. CNN host Jake Tapper captures the sentiment, noting that Plame made her anti-Semitic Tweets on a Jewish holiday:

This would be little more than interesting trivia for veterans of mid-2000s Washington controversies if Plame did not sit on the board of directors of the Ploughshares Fund, a liberal anti-nuclear-weapons philanthropy that served as the center of what Obama Administration Deputy National Security Adviser Ben Rhodes called an “echo chamber” propping up support for the Obama Administration’s controversial nuclear deal with Iran. You can read more about Rhodes, Ploughshares, and the “echo chamber” in CRC’s October 2016 Foundation Watch.

Numerous pro-Israel commentators alleged around the time the “Iran deal” was negotiated that Obama Administration and “echo chamber” figures were engaging in “dual loyalty” smears against Jewish opponents of the agreement. (The New York Times infamously classified Democrats opposed to the Iran deal by whether the Senators were Jewish and how large a Jewish population resided in their states, drawing criticism even from the liberal-leaning Anti-Defamation League.) Apparently, those alleged talking points stuck with at least one of Ploughshares’ board members.