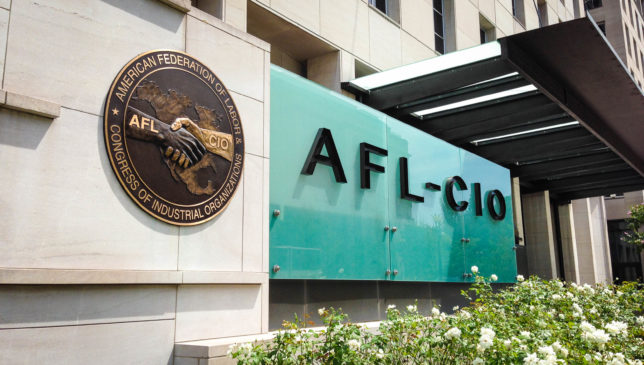 Organized labor’s would-be friends in the conservative movement say that the labor movement could be a countervailing force against the rising power of socially progressive “woke capital.” Senator Marco Rubio (R-FL) all but endorsed the unionization campaign at Amazon earlier this year, writing:

It is no fault of Amazon’s workers if they feel the only option available to protect themselves against bad faith is to form a union. Today it might be workplace conditions, but tomorrow it might be a requirement that the workers embrace management’s latest “woke” human resources fad.

However, the current labor movement forms the combat groups of the woke professional managerial class (PMC), who make up the leadership and operative class of the union movement. Last week, the AFL-CIO and its officers tweeted out two clear examples of the “social justice unionism” into which the PMC has led the erstwhile House of Labor.

Of the 12 million members of AFL-CIO member unions, how many of them knew that October 20 was “International Pronouns Day 2021”—an observance created by very online woke progressives to “make respecting, sharing, and educating about personal pronouns commonplace”? Probably not many did, at least not until the Biden administration State Department tweeted about it to many raised eyebrows.

But among the AFL-CIO leadership, International Pronouns Day is apparently a major observance because the labor federation put out a tweet from its official handle asking followers: “What are your pronouns?” 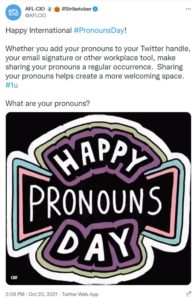 That wasn’t the only offering from the AFL-CIO’s front office to radical transgender activism for Pronouns Day. Liz Shuler, who ascended to the AFL-CIO presidency after the death of Richard Trumka, tweeted in support of a handful of Netflix activist employees who planned to walk out in protest of Dave Chappelle’s latest stand-up special, in which the comic made jokes about transgender people that audiences found funny and radical woke progressives found worthy of “cancellation.” 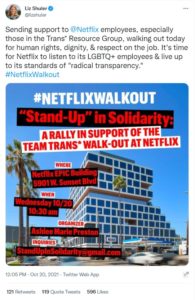 So how did the once “purely industrial or economical class organizations with less hours and more wages for their motto” end up endorsing a walkout targeting the economic interests of one of its own members (the actors’ union SAG-AFTRA is a constituent union of the AFL-CIO) for starkly political reasons? One must look to class, specifically the professional managerial class that runs the day-to-day operations of a national labor union.

The PMC consists of the university-educated managers who work in major organizations. They are generally and increasingly left-leaning and “woke,” and labor-union work selects for the most left-wing and most woke among the PMC. Labor union work is often a resume builder for a left-progressive activist interested in non-economic liberal activism.

With those as the true aims, the AFL-CIO going all out for trans activism makes sense. The union-member working classes have given essentially no thought to pronouns since high school, and they assuredly include a fair number of Chappelle fans who want Netflix to keep commissioning Chappelle’s comedy routines. Union members might fund the union’s operations, but woke-liberal PMC activists turn that money into tweets and actions.

This is why Senator Rubio’s ideal of a labor movement that could protect workers against a “requirement that the workers embrace management’s latest ‘woke’ human resources fad” is folly. The operatives who run the labor unions endorse woke H.R. fads. And to the extent they don’t, they support going even further, not protecting workers from management’s critical race theory trainings or panders to radical transgender ideologues.

Until something changes in the class of union operatives, a conservative union movement cannot exist.