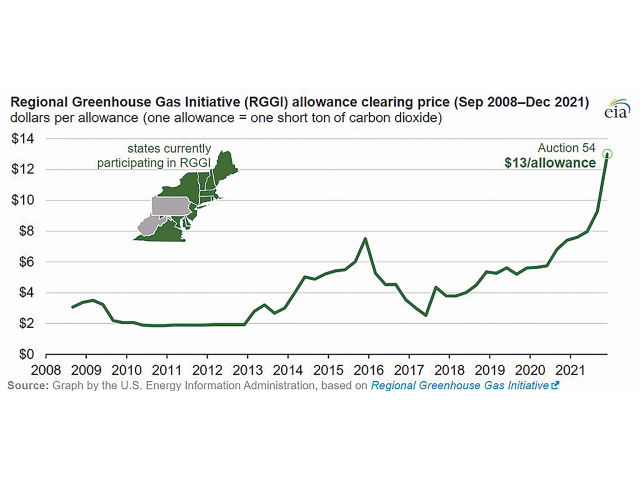 Virginia State Sen. Gene Yaw also noted that the clearing price for credits at auctions has quadrupled and that eight of the RGGI states are among the top 10 states with the most expensive electricity rates in the country. Credit: U.S. Energy Information Administration. License: https://bit.ly/37VZrUN.
by Kevin Mooney

Power PA Jobs Alliance has posted commentary and testimony from Anthony Holtzman, an attorney with K&L Gates, about the constitutional implications of Wolf’s efforts to join RGGI without legislative approval. Holtzman also testified before the Pennsylvania House in July 2020 where he told lawmakers that the Pennsylvania Constitution “does not contain any provision that  supplies the governor or any other executive branch official or entity with the authority to sign onto an interstate compact or agreement. The General Assembly alone possess that power.” Holtzman also went into some detail to describe why RGGI involves taxes and not mere fees. This is a critical point, he explained, because the Pennsylvania Supreme Court has “long held” that only the General Assembly can impose a tax.

“RGGI’s quarterly auction mechanism, which as I suspect you know is really right at the heart of this program, would qualify as a ‘tax’ and not a ‘fee’ as a matter of law because the proceeds of the auctions are grossly disproportionate to the costs of administering the program,” Holtzman continued.

In fact, the numbers indicate that it has raised more than $3 billion to date. And the signatory states have used the overwhelming amount of that money to support policy initiatives, like energy efficiency and renewable energy initiatives, or transfer the money to general funds to bolster state coffers. Again, only 6 percent of the proceeds have gone towards administering the RGGI program itself. So the program imposes a tax, and a tax is something that only the General Assembly can impose.

Despite the higher consumers costs, Wolf insists in his veto message that “Pennsylvania is facing a climate crisis” and that “RGGI is a solution that would stimulate the economy to the tune of $2 billion while reducing harmful greenhouse gases.” Since first announcing his executive action, Wolf’s Department of Environmental Protection has been attempting to sell the public on the health, environmental, and economic benefits of RGGI based on its modeling exercises.

Just as in Virginia, a large well-funded network of environmental advocacy groups is lining up the proponents of RGGI. They have persistently echoed the governor’s messaging. The Natural Resources Defense Council, PennFuture, the Clean Air Council, Clean Power PA, the Sierra Club, the Evangelical Environmental Network, the Pennsylvania Environmental Council and Environmental Defense Fund, and Ceres are among the groups that issued statements in tandem with the governor’s veto. But despite all their financial advantages, the green organizations and their allies in the Wolf administration continue to run away from the democratic process.

That might because the alarmist rhetoric they have used to rationalize expensive, interventionist climate change regulations have been crashing against scientific reality in testimony before Pennsylvania’s state legislature. The CO2 Coalition, a Virginia-based nonprofit that includes dozens of scientists, has assumed a prominent role in debunking the notion of a pending climate catastrophe.

In June 2021 before the House Environmental Resources and Energy Committee, Gregory Wrightstone, executive director of the coalition, testified:

The Wolf administration relies on factually incorrect assertions of ongoing and future harm from CO2-driven warming. Historical data show predictions of increased flooding, drought, heat waves, health risks and more to be blatant fearmongering meant to advance a destructive anti-science agenda. Instead of relying on climate misinformation to support the imposition of a program that would destroy Pennsylvania’s billion-dollar fossil fuel industry and tens of thousands of associated jobs, the government bodies tasked with review of RGGI should “follow the science” and reject this economically crippling program.”

The coalition has been circulating scientific studies that highlight how “additional CO2 will be a net benefit to the world.” During the same testimony, David Legates, a professor and climatologist at the University of Delaware, informed lawmakers that CO2 is not the most important greenhouse gas. “That honor goes to water vapor,” he explained, “which is responsible for nearly 90% of the net warming of the planet due to the radiative impact of the Earth’s atmosphere.”

We have currently entered a warmer period in human history. But I do not believe humans are responsible for most of this warming as many other factors exist to cause climate to change. So, to create a plan to ‘stabilize’ the Earth’s climate is like trying to keep the Sun from shining. We cannot halt something that for all history has been variable and so all such attempts at “climate stabilization” are doomed to failure.

Power PA Jobs Alliance cites a long list of studies and articles that delve into the potential impact RGGI could have on union jobs and the economy as a whole in Pennsylvania. Given the state’s prominent position in the natural gas industry, RGGI could, if anything, harm Pennsylvania’s economic standing more than it has Virginia’s. But the difference is that Virginia residents are not dealing in theory. They are already living with the fallout from RGGI.

David Stevenson, director of the Center for Energy & Environment at the Caesar Rodney Institute in Delaware, recently submitted comments to the Virginia House of Delegates detailing the impact RGGI has had on Virginia residents and businesses.

“Virginia’s RGGI carbon tax started in January 2021, and solar power generation more than doubled to 4% of electric demand as the impact of the VCEA kicked in,” Stevenson says in his comments:

The bottom-line result was residential electric bills would likely rise to $80 per year in just the first year. . . .

According to the US Energy Information Agency, ten months of real data shows the fallacies of Virginia’s RGGI carbon tax program when compared to the same ten months in 2020.

The Caesar Rodney Institute has released a study that shows how costly RGGI has been to Virginia in just one year.

Wolf’s original plan was to have Pennsylvania follow on the heels of Virginia by joining in January 2022. That hasn’t happened in large part because the peoples’ elected representatives have offered a stiff resistance. When this report went to press, the outcome of Wolf’s lawsuit was unknown. But the longer the forces gathered in favor of free market energy polices can hold out in an election year, the less likely Wolf will be able to coerce emissions restrictions onto the already beleaguered energy consumer.

How Russia’s invasion of Ukraine might impact the debate over RGGI in Pennsylvania is an interesting question.

Yaw, the Republican state senator who chairs the energy committee, has put out a press statement equating energy independence with national security.

“And this is why short-sighted climate policies—like forcing Pennsylvania into the Regional Greenhouse Gas Initiative (RGGI) and cancelling natural gas and oil infrastructure, the Keystone XL pipeline chief among them—are so very dangerous,” Yaw said in his statement. “People across the world, not just in Ukraine, will die from the leverage Russia holds over global energy exports.” Yaw goes on to call on Wolf to “abandon policies” that “hamstring” the oil and gas industry. He also challenges fellow lawmakers to resist environmental pressure groups.

“Our elected officials must set aside their allegiance to green energy lobbyists and turn up gas production so that we can crush Putin’s war machine without setting a single foot on foreign soil. As a nation that prides itself on its staunch defense of liberty, we must not undermine Ukraine’s fight for freedom by bankrolling their aggressor, “Yaw said. “And natural gas is the most valuable commodity Russia has—for now.”

In a new development, Yaw has joined with Sen. John Yudichak, a former Democrat turned independent, who represents parts of Carbon, Luzerne, and Monroe Counties, to send a letter to the state’s Independent Fiscal Office. In the letter, the senators ask the office to perform an audit of the modeling the Wolf administration has used to justify entering RGGI. Yudichak is who also chairs the Senate Community, Economic and Recreational Development Committee, plans to host a joint hearing with Yaw’s committee in April to discuss the findings.

“Pennsylvania taxpayers, consumers and businesses deserve honest, accurate information about the proposed RGGI program and how it will impact their everyday lives,”  Yudichak in a press release. “The plan is expected to substantially increase utility bills for every small business and homeowner in Pennsylvania.”