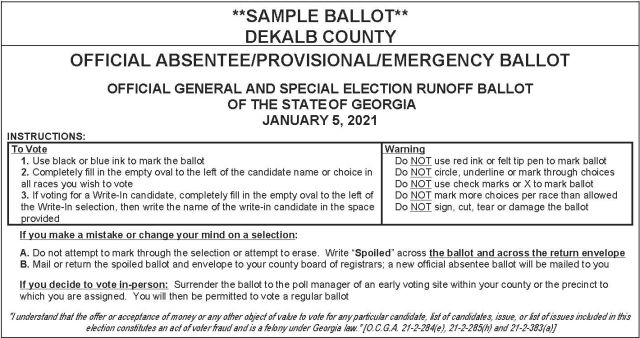 Some functions are broadly accepted as the proper and exclusive responsibility of government: the military, the police, the justice system, and even running the elections for public office.

In the November elections, the nonprofit Center for Technology and Civil Life (CTCL) stirred controversy with its targeted funding of public elections, prompting lawsuits and investigations. In December, CTCL made another wave with its $4.6 million grant to DeKalb County for Georgia’s upcoming special election. The group drew national attention in October when Mark Zuckerberg and Priscilla Chan donated hundreds of millions of dollars to CTCL.

CTCL’s grants to local governments met with skepticism and concern about a private entity funding public elections. For instance, Summit County, Ohio, rejected a $580,000 grant from CTCL over “ethical and legal” concerns, as well as concerns over Zuckerberg’s involvement with the organization.

In Texas, the Texas Voters Alliance filed a federal lawsuit against CTCL to block the nonprofit’s grants, arguing that local governments were illegally forming “a public-private partnership with CTCL for federal election administration.” Additionally, the suit stated that the group “targeted counties and cities with progressive voter patterns.”

In Michigan, a lawsuit argued that CTCL workers were “partisan operatives” and that using the grant money “violates state law that calls for jurisdictions to use public—not private—funds for such voter initiatives.”

The organization’s legal battles did not end there, as the Thomas More Society’s Amistad Project filed several lawsuits across multiple states against CTCL, most recently challenging CTCL grants to Fulton County, Georgia.

The lawsuits, however, seem to have mainly been in vain, as petitioners in Pennsylvania and South Carolina have had their injunction requests rejected.

In December, DeKalb County accepted a $4.6 million grant from CTCL for the January runoff election in Georgia.

Donating such a large amount to DeKalb County appears suspicious and has certainly stirred further controversy. A cursory look through DeKalb’s election results from this November’s general election shows that the county is a Democratic stronghold. In the presidential elections for 2004–2020 the Democrat presidential candidate received over 70 percent of the votes in DeKalb County in every election.

Given that the Senate runoff elections on January 5, 2021, will decide which party controls the U.S. Senate, CTCL’s grant could not be more controversial.