Briefly, what is Antifa and why should anyone care about it? 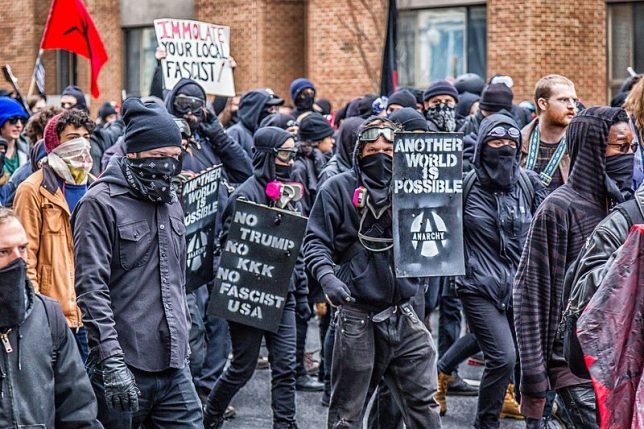 The Left’s explosive, prolonged rage at the election of President Donald Trump on Nov. 8, 2016, gave new life to the ultra-violent leftist movement known as Antifa.

As a result, Antifa, which has been described as a revolutionary communist-anarchist militia movement that aspires to forcibly overthrow the United States government, is responsible for “a level of sustained political street warfare not seen in the U.S. since the 1960s.”

Reports of Antifa violence are everywhere, which is why the U.S. Department of Homeland Security has quietly designated Antifa as “domestic terrorists.” (Capital Research Center produced a three-part documentary series, America Under Siege, about Antifa and other political actors.)

Antifa is not a single organization: it is a movement or coalition of leftist groups, each of which claims to combat “fascism,” a political ideology whose definition academics have been arguing about for decades. The word Antifa itself is a truncation of anti-fascist.

Antifa has gained new prominence in the post-Obama era. They trace their roots back to Nazi Germany. Although they opposed the Sturmabteilung (SA), or Nazi storm troopers, like the SA they also used violence to intimidate political opponents and break up their meetings and rallies. It could be argued that the ideological distance between Antifa and the now-defunct National Socialist German Workers’ Party (Nationalsozialistische Deutsche Arbeiterpartei, abbreviated as NSDAP) or Nazi Party, is so slight it can be measured in millimeters.

Determining who funds Antifa is difficult because the movement is highly decentralized and consists of private individuals and loosely affiliated groups.

Journalist Lee Stranahan downplays the significance of funding to Antifa.

“While it’s been proven that funders like Soros and the Democrat Party have paid protest organizers and some protesters, groups like the violent Black Bloc [sic – black bloc refers to a set of tactics, not a group] typically aren’t motivated by money, but instead come to protests because of their anti-American ideology, base criminal desires and thrill seeking.”

Refuse Fascism was created in the weeks after Donald Trump’s unexpected victory over Hillary Clinton in the 2016 presidential election. The group’s goal was summed up in a slogan on its website: “It’s Fascism: Drive Out the Trump/Pence Regime!”

Refuse Fascism participated in rioting on Feb. 1, 2017, at the University of California, Berkeley, with the goal of preventing conservative controversialist Milo Yiannopoulos from giving a speech. The rioting caused more than $500,000 in damage.

Stopping someone from speaking is called no-platforming (or sometimes de-platforming). Summoning the spirit of “Repressive Tolerance” essayist Herbert Marcuse, the so-called father of the New Left who favored shutting down non-leftists, Antifa and others on the far Left believe that fascists are not entitled to free speech.

But Antifa operates under a twisted definition of fascism, labeling mainstream conservatives fascists and lumping them in with white-supremacists and neo-Nazis.

Except in the fantasies of Antifa and radical hate groups like the Southern Poverty Law Center, it is fair to say that true fascists are hard to find in the U.S. today.

Nevertheless, Antifa supporters are talented at finding fascists where they don’t exist.

Radical journalist Natasha Lennard wrote at the Nation on the eve of Inauguration Day 2017, that Donald Trump is a living, breathing example of a fascist:

To call Trumpism fascist is to suggest that it demands from us a unique response. We can deploy the “fascism” moniker to Trump’s ascendance by recognizing features like selective populism, nationalism, racism, traditionalism, the deployment of Newspeak and disregard for reasoned debate. The reason we should use the term is because, taken together, these aspects of Trumpism are not well combated or contained by standard liberal appeals to reason. It is constitutive of its fascism that it demands a different sort of opposition.

So is Manhattan Institute scholar Heather Mac Donald, allegedly, because she is pro-police.

In April 2017, Antifa prevented Mac Donald from entering an auditorium at Claremont McKenna College where she was supposed to deliver a speech. Bizarrely, the activists called her “a fascist, a white supremacist, a warhawk, a transphobe, a queerphobe, [and] a classist” who was “ignorant of interlocking systems of domination that produce the lethal conditions under which oppressed peoples are forced to live.”

All because she has written books about how the police are not racist.

Meanwhile, here are just a few examples of Antifa violence from 2017:

The Antifa website ItsGoingDown.org states that “in the U.S., most [anti-fascist] activists are anarchist, although a few are Maoist or anti-state Marxists,” but “in other countries, the movement is predominately Marxist.”

Antifa views America and those who safeguard its free institutions as fundamentally illegitimate. ItsGoingDown.org advises activists to “build a culture of non-cooperation with law enforcement.” “If you have any intention of working with the police, FBI, or other agencies,” it continues, “or if you publically [sic] condemn anti-fascists who break the law: don’t call yourself an anti-fascist.”

ItsGoingDown.org has urged activists to make the country “ungovernable” by participating in “mass insurrection,” “mass resistance,” and “all manner of physical violence” against Trump supporters, capitalists, and “conservative fascists.” The website displayed propaganda images of violent attacks on persons wearing Trump campaign hats bearing the slogan, “Make America Great Again.” This kind of violence was a “necessary evil” to promote social justice and destroy “fascism.”

Because of the rise of Antifa in the current political climate, CRC is launching a rolling exposé on the movement. In a series designed to grow into a separate website, CRC will examine in more detail the origin and history of Antifa, the ideology behind the movement, Antifa leaders and sympathizers, sources of funding, and common coalition partner groups. The exposé will include databases to make it easier for readers to track members, events, and even victims.