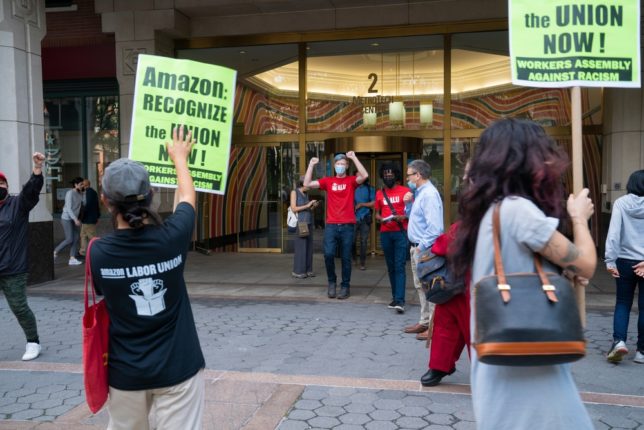 Back in 2021, we conducted a survey of “core issues in labor policy.” In the year or so since publication, the Biden administration and Big Labor have pressed its interests, with major developments in those core issues. Today, we look at the issues raised in “Every Job a Factory Job” and “Independent Contracting,” which cover “legal efforts to drive workers from industries unions have found difficult to organize into unions.”

In our earlier piece, we took note of labor union strategies to adapt its mid-20th century “Three Bigs” model (the three Bigs being Big Labor, Big Government, and Big Corporations) to contemporary workplace relations by changing the definitions of “joint employment” and “independent contracting.” These approaches seemed to indicate the political weakness of Big Labor’s “card check” advocacy, which would replace secret ballot votes on union organizing with public canvassing and signatures.

Unfortunately, that analysis was apparently overoptimistic. Jennifer Abruzzo—the Biden administration-appointed general counsel (essentially chief prosecutor) of the National Labor Relations Board (NLRB) who previously worked as a lawyer for the left-wing Communications Workers of America union—is proposing to enact card check by NLRB decision by reviving a long-dead precedent called the “Joy Silk doctrine.” Lawyers with the law firm Proskauer explain what that precedent entailed:

Secret ballot elections give employers an opportunity to present employees with arguments against unionizing and allow employees to make their decisions free from the scrutinizing eyes of union organizers and cancel-culture coworkers. Reviving the Joy Silk doctrine would make it nearly impossible for employers to present arguments against unionization to employees and hand a decisive advantage to union organizers, whose campaign promises are not binding.

While unions win most organizing elections where votes are held, they do not win them all. This is fundamentally why Big Labor wants to replace secret ballot votes with card check. Since a congressional path to mandatory card check is closed for now, Big Labor’s allies in government are looking to the NLRB to slip their preferences into policy. Even the stalled PRO Act only pushed card check by stealth, rather than the full adoption proposed in the Obama-era Employee Free Choice Act.

On independent contracting and joint employment, there was some better news. President Biden had nominated David Weil, administrator of the Wage and Hour Division of the Department of Labor in the Obama administration, to retake his old post. Weil is a fierce critic of independent contracting and vowed harsh regulatory action against what he called “the fissured workplace” in a 2014 book. But despite a Democratic Senate majority mostly loyal to Big Labor, Weil saw his nomination defeated on a test vote, with Arizona Democrats Kyrsten Sinema and Mark Kelly and West Virginia Democrat Joe Manchin voting with all Republicans against it. While Weil’s defeat is unlikely to stall the Biden Labor Department’s pro-union and anti-contracting agenda, it does keep a true believer out of a key policymaking seat for at least some time.

These political moves come amid some high-profile, and unusually successful, unionization campaigns targeting major corporations. After a decade of multi-million-dollar SEIU media campaigns targeting McDonald’s, the union had organized few if any stores. But SEIU’s Workers United division has already made inroads targeting Starbucks in an old-fashioned shop-by-shop organizing campaign, winning union elections in several stores. The Amazon Labor Union has done similarly in shop-level organizing against Amazon, though its second election in Staten Island was a defeat for the union.

So the switch to smaller-scale organizing appears to be an acknowledgement that the all-or-nothing approach isn’t feasible. Instead, unions are trying to just chalk up some wins, however modest, and hope they can build on that. It isn’t a bad strategy for them.

Obviously, as can be seen from the card-check example, unions’ many bad ideas to remake the American workplace and economy are not dead. Indeed, they passed the House of Representatives last year and still sit before the Senate. But for now, unions are operating under the system as it is, not the system as they wish it would be.