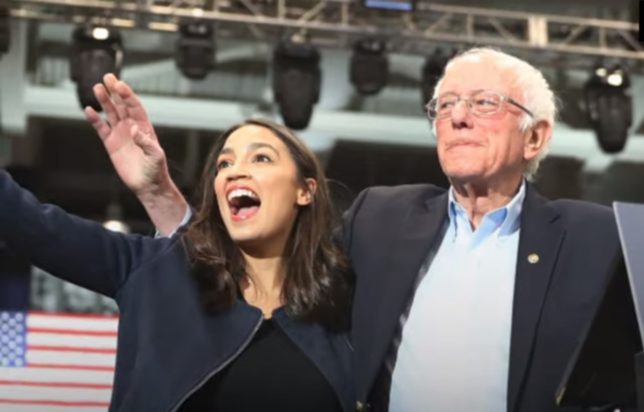 Democrats have introduced a bill intended to give President Joseph Biden sweeping powers to halt global warming, using wartime measures to declare war on nature itself.

The National Climate Emergency Act (NCEA) (H.R. 794), introduced on February 5 by Rep. Earl Blumenauer (D-OR) and Rep. Alexandria Ocasio-Cortez (D-NY) with support from Sen. Bernie Sanders (I-VT), exhumes a 1976 law—the National Emergencies Act—to declare global warming a national security threat. Under the National Emergencies Act, the president has access to 136 statutory powers granting him enormous ability to respond to an emergency. Previous presidents have used it to respond to the 1979 Iranian hostage crisis, the 9/11 terrorist attacks, the COVID-19 outbreak, and proliferation of biological and chemical weapons.

Congressional approval is needed to unlock the most stringent of those powers, which is where the NCEA comes in. Unlike its predecessor (H. Con. Res. 52) from the previous Congress, the NCEA would mandate a presidential declaration of a state of emergency under the 1976 act. Its predecessor merely demanded “a national, social, industrial, and economic mobilization of the resources and labor of the United States” to halt, reverse, mitigate, and prepare for the consequences of the climate emergency” without invoking the 1976 National Emergencies Act.

Devils in the Details

According to the early text of the bill (archived here), its provisions include:

This isn’t a roadmap to a stable climate; it’s the road to serfdom, spelled out in detail. Like the Green New Deal, the NCEA is more about transforming the American economy—hence the language about union membership, inequities, and historic disadvantages—and less about the climate.

Bundled together, this is called “environmental justice,” and it’s the epitome of decades of activism and theory-crafting on the Left. Environmental justice is a product of “intersectionality,” the dominant ideology driving today’s left-wing progressives. It envisions a field of competing categories like race, gender (not sex), and class against a Marxist backdrop in which all history is a set of power struggles between oppressor and oppressed. By applying it it to environmentalism, which in past decades was more interested in population sizes than class struggle, leftists have discovered a perfect storm of crisis, government power, and sweeping rhetoric to totally transform the United States from top to bottom.

Today that ideology dominates the Democratic Party. Biden, never a radical on the environment, even titled his 2020 presidential campaign’s “green” issues section “The Biden Plan for a Clean Energy Revolution and Environmental Justice.” His platform revolved around a Green New Deal, a “100% clean energy economy” by 2050, and prosecuting “fossil fuel companies and other polluters who put profit over people.”

Contrast that with Barack Obama’s 2008 campaign platform, entitled the “New Energy for America Plan,” which focused on a cap-and-trade program (which failed to pass the Democratic-controlled House in 2010), electric vehicles, eliminating oil imports from Venezuela and the Middle East, reducing greenhouse gas emissions by 80 percent by 2050, and even prioritizing the construction of the Alaska natural gas pipeline (really).

How much has changed in just 13 years. Obama’s plan was the most extreme yet proposed by a serious presidential candidate in 2008, but if he ran on it today the Left would condemn him as a reactionary.

Much Ado About Nothing

Moreover, sweeping government powers are totally unnecessary to stave off an apocalypse induced by global carbon dioxide emissions–if you’re inclined to believe one is coming. The Paris Climate Agreement, the last major international climate change agreement, was effectively symbolic according to the United Nations, hardly a bastion of climate skepticism.

The UN’s 2020 Emissions Gap report shows that the U.S. greenhouse gas emissions fell rapidly over the past few years due to the country’s widespread adoption of natural gas—a product of the fracking boom—and, to a lesser extent, wind and solar sources. That’s without the much-vaunted Paris treaty, which President Donald Trump withdrew the U.S. from in 2017, only to have President Biden rejoin on his first day in office. The U.S. is expected to reach 2020 emissions reductions targets drafted in the 2010 Cancun Agreements, unlike “green” Canada to the north.

In 2018, the World Health Organization ranked the U.S. among the countries with the cleanest air in the world—cleaner than Italy, Switzerland, the United Kingdom, Austria, France, Japan, and Germany (the “green man of Europe”).

Even the New York Times, usually rabid for aggressive climate policies, recently admitted that emissions cuts are pointless: “But even if every country does meet its targets, it will not be enough, not by a long shot.”

The Times’s solution is a lurch even further to the left and into fantasy. Massive government spending would invest “in millions of emissions-free vehicles, in hundreds of thousands of new charging stations to service those vehicles,” an electric grid powered by renewables (an utter impossibility sure to lead to Cairo-like brownouts), and the weatherization of “millions and millions” homes.

In other words, the Times wants the Green New Deal, which promised socialism in “green” packaging. As Green New Del architect Saikat Chakrabarti told the Washington Post in 2019, “Do you guys think of it [the Green New Deal] as a climate thing? Because we really think of it as a how-do-you-change-the-entire-economy thing.”

Environmental justice is just a new name for a radical ideology Americans that have fought for over a century and defeated in the Cold War. Slapping “justice” on the name doesn’t make it fair or equitable. But it does give the Left an unlimited mandate to totally remake the United States in its own image. The looming climate “emergency” merely gives leftists the urgency they require to bypass the democratic public policy process to achieve that mandate.

No wonder that left-wing groups have been chomping at the bit for President Biden to declare a climate emergency. In 2019, the New Yorker argued for such a declaration. An entire advocacy group, Climate Mobilization, exists to urge Democrats to enact one, demanding that “anti-racist and anti-oppressive struggle must be at the heart of the climate movement.” The Center for Biological Diversity endorsed the NCEA, calling it “a years-long campaign by nearly 750 climate and environmental justice groups urging the president to declare a climate emergency and fully use the emergency powers that Congress allows in the face of a crisis.”

I think it might be a good idea for President Biden to declare a climate emergency. Then he can do many, many things under the emergency powers of the president that wouldn’t have to go through, that he could do without legislation.

The Left is all in for authoritarianism. There’s no faster way to dispense with rights than with an emergency.