My “15 Minutes of Fame” Were Really Only One

And Mom wasn’t even watching. 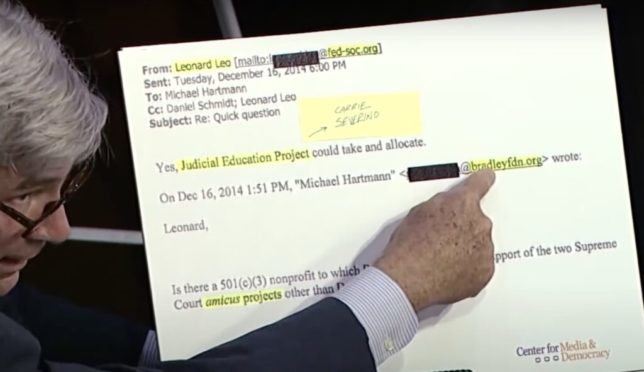 Maybe you missed it.

My mother did. The Senate Judiciary Committee hearings on Judge Amy Coney Barrett’s nomination to the Supreme Court were taking a long time that day last week, after all. By the time it was Senator Sheldon Whitehouse’s turn to question Barrett, the interest of some might have been waning.

Whitehouse actually didn’t even ask Barrett one question. He used his nationally televised time to instead make a presentation about the influence of conservative “dark money” on the Court, its membership, the cases brought before it, and the legal arguments made in them. It was more than a little overheated.

About midway through his production, which he entitled “The Scheme,” Whitehouse included general negative characterizations of and insinuations about Milwaukee’s conservative Lynde and Harry Bradley Foundation, on the program staff of which I worked for almost two decades. He specifically presented some internal Bradley documents. The documents come from a hack of the foundation, allegedly by Russians. It was all very dramatic.

So my name appeared on a short e-mail chain on the Rhode Island Senator’s easel, and thus on TV, for just more than one minute—14 minutes short of the promised 15. While somewhat personally nerve-wracking, it was a little underwhelming.

To me, and thus admittedly self-servingly, the e-mail exchange—along with another hacked document, prepared on my computer, that Whitehouse had used just prior—are actually evidence of effective and appropriate, properly professional grantmaking. That’s better judged by others, though. There is certainly nothing secretive about Bradley’s grantmaking; its grants, including the particular one Whitehouse apparently thought he was “exposing,” are transparently reported on its tax forms and its website.

Overheated, dramatic, underwhelming. We at The Giving Review passionately believe that more genuinely evenhanded discussion and hardheaded, thoughtful analysis of all policy-oriented grantmaking, by those of whatever worldview, is necessary. In our modest way, we’re trying to act on this belief. Given Sen. Whitehouse’s performance last week, it does not seem as if he truly shares it.

Maybe I missed it.

This article first appeared in the Giving Review on October 22, 2020.