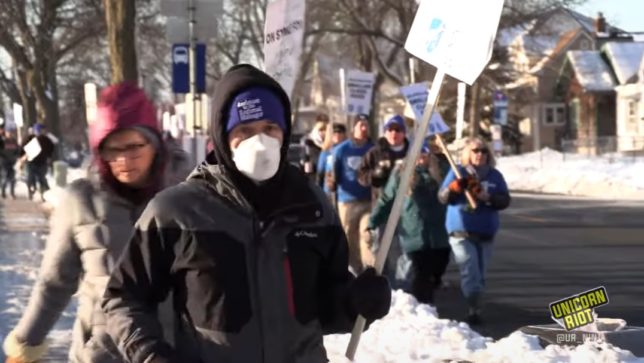 Minneapolis Federation of Teachers (MFT) members struck against the school district in March, cancelling classes for three weeks. A provision in the contract that ended the strike resurfaced this week to much criticism: Teachers’ racial and ethnic background is to be explicitly considered in layoff (“excessing”) decisions, with “a teacher who is a member of a population underrepresented among licensed teachers in the site” given preference over “the next least senior teacher, who is not a member of an underrepresented population.”

Yes, a teachers union—and possibly more, as a Minneapolis union official told the Minneapolis Star Tribune that “It can be a national model, and schools in other states are looking to emulate what we did”—finally found something worthy of breaching the sanctity of seniority and tenure. (Improving students’ outcomes was not that thing.) It just happened to be social justice unionism.

There You Go Again

If I sound like a broken record, that is because it is impossible to understand America’s labor union movement without understanding social justice unionism. When Sen. Marco Rubio (R-FL) claims that workers might need to unionize to protest “a requirement that the workers embrace management’s latest “woke” human resources fad,” the gaping hole in his argument is social justice unionism.

By negotiating an explicitly race-focused layoff-order agreement, whether or not it is legal, the Minneapolis Federation of Teachers has demonstrated the extent to which left-wing “social justice” prevails over “unionism.”

In social justice unionism, rather than focusing advocacy on members’ economic status or even broader social-democratic welfare-state policy, the union movement aligns with full-spectrum liberalism to an even greater degree than that normally indicated by coalition politics.

Traditional, class-solidarity unionism was based on the equality of all workers with one another. Therefore, unions typically base hiring, firing, job assignment, and wage scales on worker seniority, rather than job performance or some other measure. But when critical race theory is on the line, MFT chose not to treat all the workers equally.

A commitment to critical race theory and other left-wing ideologies is not unique to MFT. The American Federation of Teachers, the MFT’s national parent union, brought critical race theory–aligned scholar Ibram X. Kendi to speak at a 2021 conference. At its 2022 national convention, National Education Association delegates voted three to one to “publicly stand in defense of abortion and reproductive rights and encourage members to participate in . . . rallies and demonstrations, lobbying and political campaigns, educational events and other actions.”

Teachers unions may get the most scrutiny, but the rest of the House of Labor—with extremely rare exceptions—is aligned with social justice unionism. The AFL-CIO’s new president endorsed protests at Netflix targeting the company for producing Dave Chappelle’s comedy routines, and the union federation celebrated International Pronouns Day. Even the Teamsters Union, once the Mob-influenced yet politically moderate outfit that could occasionally support a Republican for president, supports “Strike for Black Lives” and endorses Supreme Court rulings expanding anti-sex-discrimination provisions to cover “gender identity.”

One could say that we owe the Minneapolis Federation of Teachers some thanks: By its radicalism, we know the radicalism of its Big Labor sisters and brothers.