Minimum Wages: To Raise, or Not to Raise?

Both sides of the minimum wage debate point to their own economic studies, but only one is interested in workers' well-being 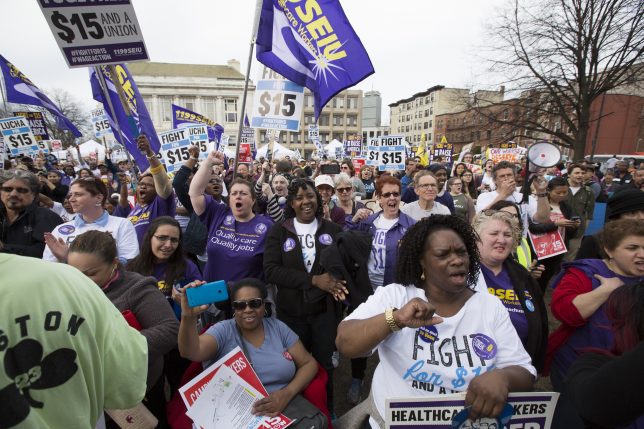 Like most policy debates, the one on minimum wages is framed by many as a simple issue of growing vs. shrinking the economy, inflating vs deflating wages, and creating vs. cutting jobs. And as U.C. Irvine’s Economic Self-Sufficiency Policy Research Institute director David Neumark points out, both sides have a catalog of “rosy policy reports” to bolster their respective arguments.

But this doesn’t address why new reports by minimum wage advocates on the Left are increasingly skewed, such as a recent study hastily commissioned by Seattle, Washington, to study the effects of its $15 per hour minimum wage law. That report by a team at U.C. Berkeley found that Seattle’s $13 per hour wage (en route to $15 per hour) did not destroy jobs, a finding gleefully echoed by former (disgraced) Seattle Mayor Ed Murray:

“When we passed the $15 minimum wage, we were warned the economy would tank, jobs would dry up, and employers would flee,” Murray said. “Today, Seattle’s economy is the strongest it has ever been, unemployment is at a historically low rate, and employers are competing for employees.”

Yet emails obtained by the Employment Policies Institute soon revealed collaboration on press statements between the Seattle Mayor’s office and the Berkeley research team to push a pro-minimum wage narrative, facilitated by the left-wing PR group BerlinRosen. And a study published just days later revealed the damage wrought by Seattle’s minimum wage hike, resulting in an average loss of $125 per month in workers’ pay in 2016:

…we conclude that the second wage increase to $13 reduced hours worked in low-wage jobs by around 9 percent, while hourly wages in such jobs increased by around 3 percent.

Neumark correctly says that a single study is insufficient proof to settle the minimum wage debate (even if the evidence is overwhelmingly on the side of minimum wage skeptics). Yet Seattle politicians and minimum wage ideologues have yet to denounce the mistaken Fight for $15, or even apologize to workers for costing them hundreds of dollars and job opportunities. If the minimum wage debate is really meant to help workers, why is the Left still arguing for its destructive effects?

The answer is, of course, political. Pro-minimum wage groups like the Service Employees International Union (SEIU) have invested far too much in campaigns like the Fight for $15 since it debuted in 2012 to stop now. In 2015 the SEIU staged protests in some 200 cities with 60,000 demonstrators demanding the federal minimum wage be doubled from $7.25 per hour to $15 per hour. Its efforts have cost the union an enormous sum—$70-90 million by some estimates.

The scheme is justified, however, by the mammoth potential payoff. If the SEIU is able to successfully organize just half of McDonalds’ workforce it could generate over $100 million each year in dues and fees. Considering the size of the pie at stake in companies like Walmart and Target—long targets of SEIU organizing schemes—any issue which opens up another front for Big Labor to protest and strong-arm companies into negotiations is a worthy investment.

Walmart and Target understand this, even if they don’t frame the debate in this way. For years the two retail giants have lifted employee minimum wages above the federal threshold, and in September Target announced it would continue raising until it reaches $15 per hour in 2020. Many in the mainstream media have cast this as a victory for Fight for $15 allies; in reality, it’s a canny way to combat the SEIU’s unionization campaign by removing minimum wage hikes as a union issue. In other words, if the SEIU is intent on using minimum wage increases to gain leverage over big retailers—with the larger intent of forcing them to negotiate and unionize—Target and Walmart can neutralize the issue by confronting it on their own terms.

For more on the Left’s minimum wage hypocrisy, see my post on the lawsuit by Democratic Party employees against the Democratic Party for paying them less than $15 per hour, or what the party platform deems “fair pay for fair work.”

Watch our short video on the failing Fight for $15 here: