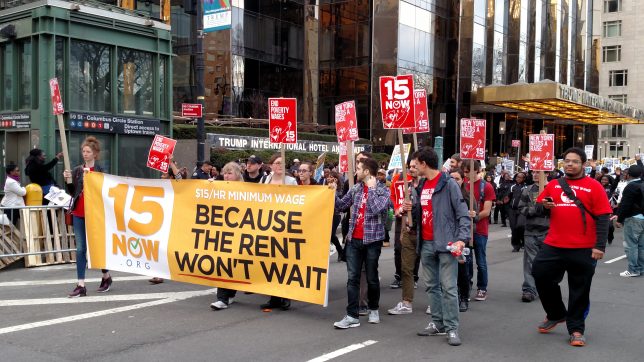 Claiming the Democratic Party has failed to live up to its promise of “fair pay for fair work,” workers have filed a class action lawsuit against the Democratic National Committee (DNC) for not providing employees with a $15 minimum wage and sufficient overtime pay, according to the Washington Free Beacon.

The 2016 Democratic Party platform calls the current federal minimum wage “a starvation wage”, and calls for an almost $8 increase to a minimum of $15 per hour. In addition, the platform notes that Americans have the right to unionize and promises Democrats “will work in every way we can… to reach this goal.”

Despite paying out nearly a million dollars in bonus money, staffers were paid “below market rates”, according to former Pennsylvania Governor and DNC Host Committee Chairman Ed Rendell. For many staffers that amounted to a flat salary of $3,000 a month, or $36,000 per year, despite some employees working 80-90 hours each week.

Capital Research Center has written on the debate over increasing the federal minimum wage, concluding that in some local jurisdictions the policy has been more effective at galvanizing organized labor to political action than raising workers out of poverty or creating jobs:

…Requiring employers to pay a [$15] “living wage” would significantly raise prices to consumers, reduce the availability of products and services, and weaken an already-weak economy.

In addition, CRC analysis has showed that many labor unions fail to provide their own employees with the same treatment they demand of other employers. Despite generating “record revenue” in 2014, for example, reports revealed that:

For more on Capital Research Center and the minimum wage, see Labor Watch.