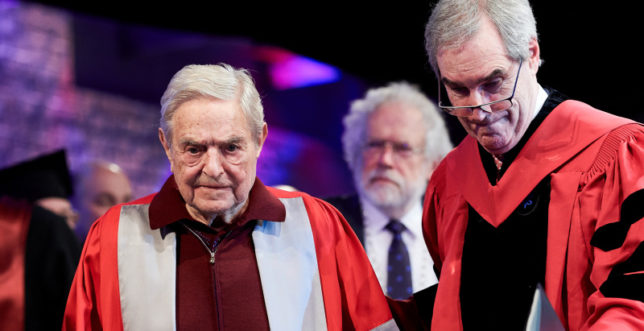 George Soros turns 90 today, yet infamous as he is, few conservatives really understand the extent of the liberal billionaire’s vast nonprofit empire.

Each group in the Soros Network is a cog in the larger “open society” machine, so named for Soros’s affinity for the philosophy of the communist-turned-lefty-libertarian Karl Popper, Soros’s professor and personal mentor during the young man’s time at the London School of Economics. Soros and Popper are both deeply critical of totalitarian “closed societies” such as the Soviet Union and Third Reich (under which both men had lived), yet they also reject free-market capitalism as practiced in the United States.

Their vision of an open society is globalist and utopian, rejecting both objective truth and established tradition in favor of technocracy: rule by the “experts.” The net result is open borders, supranational governments such as the European Union, enforced secularism, and dissolution of the U.S. Constitution by a new American Revolution designed by plutocrats to wipe away the republic and replace it with socially engineered tyranny.

Soros may have rejected Stalinism, but he sure drank deeply from the font of Marxist social theory.

It shouldn’t surprise anyone, then, that Soros sneers at other billionaires’ giving to the poor, believing his own model far superior: using his vast wealth to undermine “undemocratic” countries such as the U.S. and convert them into “open societies.”

In America, that means gaming the redistricting system to favor Democrats in congressional and legislative elections, saturating federal courts with “Progressive” judges, restoring voting rights for felons, providing amnesty to illegal aliens, and wiping away “corruption”—invariably lodged in the Republican Party.

The Soros Network (or Open Society Network) is a complicated jumble of organizations, both for-profit LLCs and nonprofits, headquartered in New York City and a multitude of foreign countries where Soros hopes to spread his ideology. Yet each group is a piece in the larger puzzle, working synergistically to advance his open society vision for the entire world—and financed with his money.

And they’re huge. Between 2000 and 2018 (the latest year for which data are available), OSF and FPOS brought in a combined $10.6 billion—greater than the GDP of some small African countries.

They also poured out nearly $9 billion over that same period, most into a huge array of left-wing think tanks, activist groups, environmentalist groups, and litigation nonprofits that form the modern professional Left in the U.S. and abroad.

The Lobbying Wing. Much of the Soros Network’s support for lobbying groups runs through the Open Society Policy Center (OSPC), a 501(c)(4) that makes grants to other 501(c)(4) nonprofits (which are allowed to spend significantly more on lobbying than their 501(c)(3) counterparts). OSPC was a key funder to organizations that agitated against the confirmation of Supreme Court Justice Brett Kavanaugh, including the Sixteen Thirty Fund, the lobbying wing of the $635 million nonprofit network run by the consultancy Arabella Advisors.

OSPC is also a major funder of the Left’s immigration lobbying efforts. It has fought President Donald Trump’s efforts to build a wall on the U.S.-Mexico border. Between 2012 and 2013—the height of Congressional Democrats’ efforts to massively expand immigration, both legal and illegal—OSPC more than tripled its spending on immigration groups from $3 million to over $11 million. In 2017, it lobbied Congress to pass the DREAM Act, which would have eventually granted citizenship to illegal aliens living in the United States.

OSPC aims to manipulate U.S. foreign policy, too. In 2017, it lobbied on a bill that would have withheld funds from U.S. military action against communist North Korea until explicitly authorized by Congress. In 2019, it lobbied for a bill to preemptively halt possible American military intervention in starving socialist Venezuela.

Indoctrinating the Next Generation

Soros established his Central European University (CEU) in 1991 in Czechoslovakia to train future generations of graduates in post-Soviet countries, indoctrinating them in open society ideology.

However, CEU’s mission attracted scrutiny in the countries where it operated. In 1993, CEU relocated to Budapest, Hungary, the country where Soros was born. Yet in mid-2017 the Hungarian government passed a law designed to curtail Soros’s influence in its higher education institution, and CEU relocated again to Vienna, Austria.

George Soros may be entering his 90th year, but don’t expect his advocacy to wind down anytime soon. In fact, a new generation of Soros mega-donors is already here.

Alexander Soros (b. 1985) is arguably the most politically active of Soros’s children. He funds a bevy of leftist groups through his own Alexander Soros Foundation and is personally involved in “social justice” activism as a board member for Bend the Arc Jewish Action PAC.

Jonathan Soros (b. 1970) is actively involved in the Democracy Alliance, the most influential convening of liberal mega-donors in America and responsible for directing huge sums of money to leading leftist groups and PACs every year. (George Soros was a key founder of the Democracy Alliance.) The Jennifer and Jonathan Allan Soros Foundation is his main philanthropy.

Taken as a whole, the Soros family and Open Society Network command effectively limitless resources with which to conduct their war on America. Conservatives need to understand the dire threat that Soros and his legacy pose to United States, and they need to stand firm against cynical, misanthropic globalism.

But as with so much on the Left, there’s always more of this secret agenda to uncover and thwart.