Very little of this money can be traced back to its original donors. 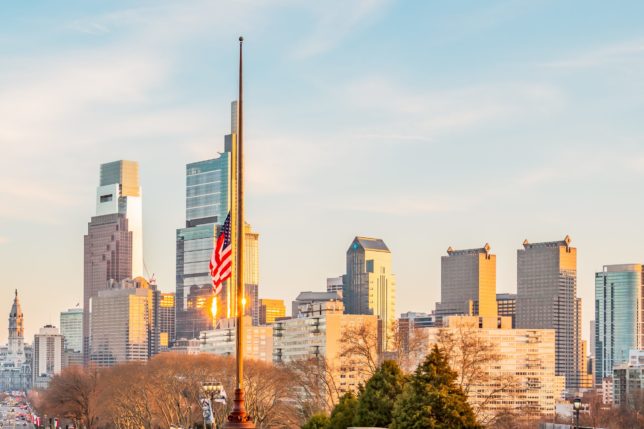 It’s time for the myth that conservatives outspend liberal elections groups to go the way of the dodo. New research examining the 2020 election in Pennsylvania reveals that left-wing political action committees (PACs) blew away conservative PACs in independent expenditures—outside spending that isn’t coordinated with the campaigns of politicians seeking office.

According to data from the Pennsylvania Secretary of the Commonwealth, liberal PACs spent over $7.5 million helping Democrats and opposing Republicans in the 2020 race for control of the legislature and attorney general’s office. Conservative PACs spent just $2.3 million, or less than one-third of what their liberal counterparts poured out statewide.

That money was used to pay for ads on television, radio, and Facebook; for fees to political consulting firms; and for digital and direct mail marketing schemes that blanketed the state in the lead-up to the November election.

Where the money came from is revealing. On the right, Republicans could count on almost $159,000 from Americans for Prosperity, a free-market group bankrolled by the libertarian billionaire (and liberal bogeyman) David Koch. Gun Owners of America, a pro–Second Amendment group, spent almost $15,000 aiding Republicans. The Pennsylvania Family Council, a conservative family values group, spent $56,000 in the election.

The biggest conservative spender was the Pennsylvania Chamber of Business and Industry, however, which poured out $1.5 million aiding Republicans—most notably spending $172,000 helping Tim DeFoor in the auditor general race, $150,000 to unsuccessfully oppose the reelection of Democrat Sen. James Brewster (SD-45), and $304,000 to reelect Sen. John DiSanto (SD-15).

All these groups were dwarfed by their counterparts on the left.

Compare the left-right spending in particularly competitive districts Democrats hoped to flip in 2020. (Note: the figures are estimates due to inconsistencies in how groups reported independent expenditures.) 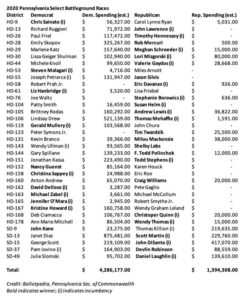 Who are these groups? Top spenders include:

The second-largest single spender, at $1.7 million, was Pennsylvania Fund for Change, a PAC that was identified as a leftist “dark money” group that attacked Republicans in 2018 and spent over $1 million attacking President Donald Trump in 2020. The Fund for Change is obscure, but its connections with trial lawyers and labor unions deserve a closer look.

In 2018, the Pennsylvania Fund for Change received $75,000 from the feminist group EMILY’S List Federal Fund, $350,000 from Working for Working Americans (a group backed by the United Brotherhood of Carpenters and Joiners), $100,000 from the National Democratic Redistricting Committee (a group founded and led by former U.S. Attorney General Eric Holder), $200,000 from a fellow named Edward Snowden in New York, and $20,000 from the Western Trial Lawyers Association Education Fund, along with a range of donations from other individual trial lawyers. The largest donor to the Fund for Change was the Pennsylvania Alliance Action, which donated more than $1.4 million in 2018.

Public records from the Pennsylvania Department of State show Pennsylvania Alliance Action is a 501(c)(4) group that was incorporated by PA Alliance LLC. The lone member of the LLC is Samuel Pond, a managing partner and a workers’ compensation attorney with the Pond Lehocky law firm. From here the money trail leads back to union operatives. The alliance has received hundreds of thousands of dollars in contributions from the Pennsylvania State Education Association, the state affiliates of the Service Employees International Union (SEIU), and the AFL-CIO, according to campaign finance records. The National Education Association donated more than $1 million to the Pennsylvania Alliance Action in 2018.

In 2005, Tewes co-founded Americans United for Change (AUFC), a major activist group that got into trouble when it was revealed in late 2016 that the group’s field director, Scott Foval, had hired homeless people and the mentally ill to instigate violence at Trump rallies. AUFC later had a hand in seeding the Sixteen Thirty Fund with $221,745 in 2009, which is part of a $731 million “dark money” network run by the infamous Arabella Advisors.

So who provided that $1.7 million to Pennsylvania Fund for Change? We may never know. Very little of this money can ultimately be traced back to its original donors. What is clear is that these staggering figures reveal just how much the professional left carpet-bombed Pennsylvania with “dark” dollars in 2020—much of it from the consultant class in Washington, D.C.

This article originally appeared in the American Conservative on May 8, 2021.