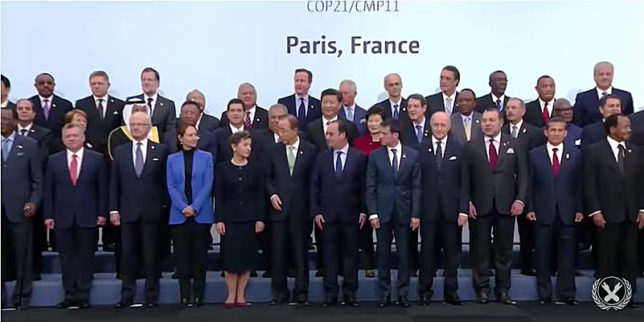 This week marks the opportunity for President Trump to follow through on his campaign pledge to reject a future built by globalists and European eco-mandarins by withdrawing from the 2015 Paris Climate Accord.

In 2017, the President told the American people that “the Paris accord will undermine our economy [and] puts us at a permanent disadvantage,” pointing out that the agreement “is very unfair at the highest level to the United States” and pledging to withdraw from it. “It’s time to exit,” he said.

Now, he’s submitted a letter under the Accord’s rules formally withdrawing the U.S. from the global warming scheme one year from now—and exactly four years after the phony treaty went into effect in November 2016. As the President rightly pointed out, the U.S. has reduced its greenhouse gas emissions far more quickly than Paris Accord signatories without wrecking our energy supply and economy—thanks to our natural gas miracle.

So what does America gain by dumping the agreement? As we noted in 2017, the Paris Climate Accord would have devastated the economy by:

And the effects on the global temperature? A decrease of less than 0.02 degrees Celsius… by 2100.

It doesn’t end there. Far from aiding the environment, the accord would have required the U.S. funnel billions of dollars each year into the so-called Green Climate Fund, established as part of the 2015 agreement and touted as “the world’s largest climate fund.”

The Fund aimed to pilfer $100 billion each year by 2020 from industrialized countries like the U.S., money which would have been redistributed on a global level. Worse, major carbon dioxide emitters like China and India—spotting an easy money opportunity—were free to give lip service to the agreement without reducing their own emissions. India even announced that it needed an incredible $2.5 trillion from the Fund to “go green.” And as of last week, it’d had found a gullible buyer: Germany, which has offered €1 billion ($1.1 billion) to promote India’s “green urban mobility.”

President Trump has already closed the spigot and saved Americans $2-3 billion promised to the Fund by President Obama, and his leadership may convince other nations to follow. Australia has already indicated it will cut funding to the Green Climate Fund.

Just as bad is the Paris “treaty’s” unconstitutionality. Although it was negotiated by the Obama administration as a foreign treaty and was treated by many proponents as binding (and so unassailable) because it forced massive greenhouse gas emissions goals on the nation, the Constitution’s Treaty Clause requires a two-thirds vote of the Senate to go into effect. The Paris “treaty” never even received a vote.