Sen. Sheldon Whitehouse’s promise that any efforts to “clean up” the politicization of nonprofits will be pursued regardless of various practical effects on those engaging in it may present an opportunity. 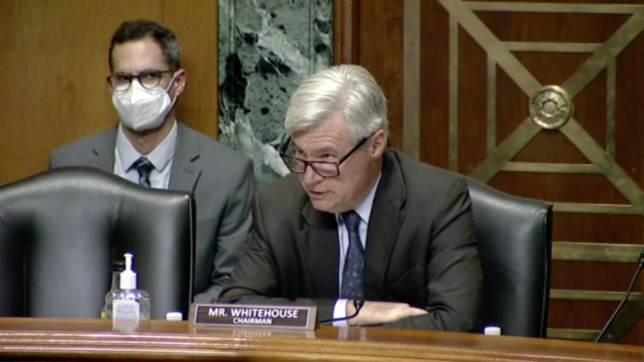 Earlier this month, a U.S. Senate Finance Committee subcommittee held a hearing to explore “Laws and Enforcement Governing the Political Activities of Tax Exempt Entities.” Chaired by U.S. Sen. Sheldon Whitehouse, a Democrat of Rhode Island, the subcommittee heard testimony from four witnesses with experience and expertise gained from serving on the Federal Election Commission, working at the Internal Revenue service, and studying nonprofitdom and philanthropy.

Some thought—in fact, some hoped—the proceeding would produce some “fireworks” that might signify more-aggressively expressed Congressional interest in the nonprofit sector’s political activities, including its political ones. There really were no such fireworks at the hearing, but there likely will still be vigorous examination of nonprofitdom in coming Congresses, potentially bipartisan and cross-ideological.

On the night before the proceeding, populist conservative J.D. Vance won the primary election to be the Republican candidate for Senate in Ohio. Vance has forcefully argued against the politicization of charity and proposed policy changes to help prevent it. His victory shows that the issue can be politically capitalized upon by office-seekers.

During the proceeding itself, Whitehouse showed that there might be an opening for the issue to be pursued by office-holders of either major party and differing worldviews. Whitehouse has long lamented what he sees as misuse or abuse of organizations having the status of a nonprofit social-welfare group under § 501(c)(4) of the Internal Revenue Code.

Contributions to (c)(4) entities are not tax-deductible. By law, tax-exempt (c)(4)s can engage in some political activity, but only so long as that is not their primary activity. Whitehouse wonders why that law isn’t being followed or enforced.

Along with Vance, others have lamented what they see as related misuse of abuse of organizations having the status of a nonprofit private foundation or public charity under § 501(c)(3) of the Internal Revenue Code. Contributions to (c)(3) groups are tax-deductible. By law, tax-exempt charitable (c)(3)’s cannot engage in partisan political activity at all. This distinction in the law between charity and politics is increasingly considered by many to be something of a “joke.” It’s neither followed nor enforced.

One challenge facing those urging that this legal distinction be respected is the practical outcome it would effect; tax-advantaged policy-oriented (c)(3) grantmaking, fundraising, and spending is not even close to equally ideologically proportioned. It is overwhelmingly more liberal and progressive.

In commenting on the effects of his position against political misuse of (c)(4) status, Whitehouse offers what might be comfort to those similarly arguing against politicization of (c)(3)s. “[J]ust to be clear,” Whitehouse said, in remarks more fully excerpted below,

The same, admirable, “let-the-chips-fall-where-they-may” attitude would and should—and one trusts will—apply to future reactions against the politicization of charitable (c)(3) nonprofits.

Excerpt of remarks by U.S. Sen. Sheldon Whitehouse during Senate Finance Committee’s Subcommittee on Taxation and IRS Oversight, “Laws and Enforcement Governing the Political Activities of Tax Exempt Entities,” May 4, 2022

By way of a closing statement, I will say that we have now entered a political era in which dark-money groups funded by powerful special interests now, on occasion, actually outspend the political campaigns of the actual candidates. And whatever communication goes on behind the scenes between whoever’s behind the outside spending, whether it be a Super PAC or another group, and the candidates themselves is completely unregulated. But the notion that information doesn’t travel in politics is an idiotic notion, spectacularly disproved by history. So the idea that there really are firewalls is simply not credible in practical reality.

The results of advertisements paid for by entities that don’t really exist and that hide whoever it is that really exists behind them is that there’s no accountability for what they say. Hence the degeneration of American political speech and the arising of the phrase “tsunami of slime” to describe political speech.

It was Citizens United itself, a decision I have violent disagreements with on many angles, but they did say that there is a nexus between secrecy and corruption in politics. And they specifically made that a predicate of the case in order to allow the unlimited money in. Then, of course, that didn’t prove true and they didn’t have a chance to rebuild.

So repeatedly I have gone to the Supreme Court to say, Hey, you were wrong, you were factually wrong that there will be effective disclosure. I think we’re up to, how many billions of dollars?, about six billions dollars since that decision, something like that. So there’s six billion dollars of proof that the Supreme Court got it wrong in its reliance on effective disclosure. And on several occasions, I’ve gone to the Court and said, You got it wrong.

In one case, I went in bipartisan fashion with Sen. John McCain, who was a legendary advocate for honest elections, and in our bipartisan brief, we said, Hey, what you said was going to happen isn’t happening. You were wrong. You need to correct. And the fact that the Supreme Court has never corrected—even when the newspapers, the FEC filings, and bipartisan briefs coming into it told them that they had been wrong—I think is a blot on the Court. So I intend to continue to work to try and clean up this mess.

And just to be clear, the efforts that I will undertake to clean this up will apply to both sides. So the conversation about whether Democrats do better or Republicans do better, whether Democrats are guiltier or Republicans are guiltier, who’s playing fair or who isn’t … It all needs to stop, to restore decency and accountability in American politics.

And I will note a recent decision in my United States Court of Appeals for the First Circuit. Rhode Island is part of the First Circuit. And a very distinguished Rhode Islander, Judge Bruce Selya, recently just upheld a Rhode Island law requiring disclosure, using these very arguments. The Supreme Court declined to review it, and I think that is the argument that makes the better of the case here.

If somebody sets up Rhode Islanders for Peace, and Puppies, and Prosperity and comes and smears me all over the place in Rhode Island, that’s one thing. If it’s Marathon Petroleum or Exxon, that’s a very different thing. And Rhode Island voters will sort that information out very quickly. In fact, it may be to my advantage to have negative ads run against me in Rhode Island by ExxonMobil. So they hide, and I don’t think that’s a fair way to go.

This article originally appeared in the Giving Review on May 16, 2022.