Inside the SEIU: “Fight for $15,” Skimming Dues, and More 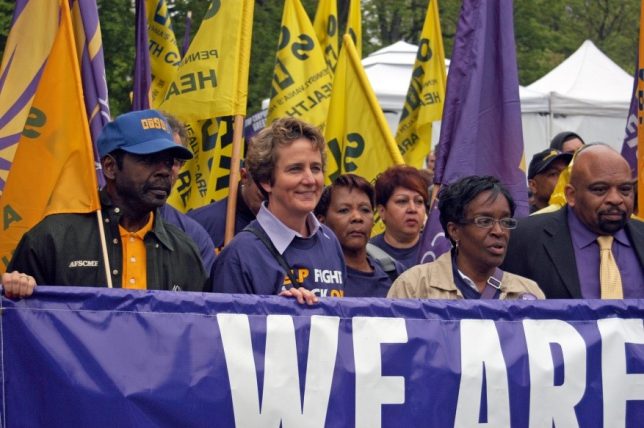 Read Part One on SEIU’s Leftist origins, and Part Two on its campaigns of intimidation.

Summary: The Service Employees International Union is a mainstay of the professional Left and Big Labor. In Part Three of “Inside the SEIU,” we look at the union’s role in organizing the so-called “Fight for $15,”  the sinister efforts to skim dues from Medicaid payments to home healthcare caregivers, and patterns of corruptions.

In recent years, the SEIU has shifted its focus from unionizing major corporations like Sodexo and McDonalds to raising minimum wages. The so-called “Fight for $15” per hour is arguably the union’s top priority in 2017, as it has been since 2012. The campaign debuted in 2012 with what were billed as the “fast food strikes.” The movement soon pulled in airport workers, child-care aides, home-care assistants, and Walmart employees. In 2015 the SEIU staged protests in some 200 cities with 60,000 demonstrators, demanding the federal minimum wage be doubled from $7.25 to $15 per hour.

The SEIU has poured tens of millions into the campaign. Some estimates through the end of 2015 put total spending at close to $70 million. It’s a huge sum, but the payoff could be even bigger: The Manhattan Institute’s Diana Furchgott-Roth estimates that unionizing McDonalds could yield $100 million annually in SEIU dues and fees if even half of the fast food giant’s workforce signed on with the union.

To that end the SEIU has poured resources into the liberal public relations firm Berlin Rosen to spin their carefully orchestrated campaign as a “grassroots” movement. SEIU, BerlinRosen, and their allies have been successful in raising minimum wages in left-wing strongholds. Blue states like California and New York, as well as Democratic cities such as Los Angeles, Seattle, and Washington, D.C. have opted to raise their minimum wages to $15 per hour. But even inside the left’s blue archipelago the Fight for $15’s successes appear limited—Baltimore Mayor Catherine Pugh (D) vetoed a $15 minimum in her city, despite intense SEIU pressure.

Attempts to roll the campaign’s momentum into an organizing fight against McDonalds haven’t gotten anywhere, however. SEIU membership has declined since the Fight for $15 broke out five years ago; even Andy Stern, from the comfort of his retirement, has questioned its long-term value. The SEIU’s leadership says their goal is to push low-wage workers into the middle class. Meanwhile, conservatives contend that it’s a dues-money grab. Union supporters point to the $70 million they’ve spent without successfully unionizing a single restaurant—but that is probably more a symptom of the Fight for $15’s weakness and not SEIU’s selflessness.

But the SEIU’s most sinister project so far involves unionizing home healthcare aides compensated through state Medicaid programs. Such compensation is designed to cut costs by incentivizing family members to provide assistance instead of hiring expensive professional help. This is a win for all parties, as the government does not have a bona-fide employer-employee relationship with home healthcare caregivers who are paid from family members’ Medicaid alliances. The SEIU colluded with left-leaning state governments to treat caregivers as public employees “for the purposes of collective bargaining,” entitling them to SEIU “representation” and thus forcing automatic dues payments. This is nothing less than government-sanctioned dues skimming.

Caregivers objecting to this SEIU “representation” sued the state of Illinois, seeking exemption from mandatory dues and fees payments. In 2014, the Supreme Court ruled in caregivers’ favor in Harris v. Quinn, finding that the caregivers were not full public employees and therefore exempt from compulsory dues.

Few home healthcare providers in Washington State, originally subject to the same policy as Illinois providers, were familiar with these newly recognized rights. They continued to pay an average of $500 to $1,000 each year to the SEIU. The Freedom Foundation, a local free-market think tank, estimates that the union collected more than $25 million each year in forced dues. As much as $14 million of that money goes money to political activism elsewhere in the country.

In response, the Freedom Foundation launched a drive to educate caregivers of their right not to join or pay dues to the SEIU. Soon more than 10,000 Washington caregivers opted out of the union, costing the union something approaching $10 million—money, CRC senior fellow Michael Hartmann notes, “which would have been used to fund candidates and causes of the Left in Washington State and… the rest of America.”

The retaliation was swift. Beginning in September 2016, Hartmann writes, the SEIU launched a flurry of lawsuits through three separate law firms, burying the tiny Freedom Foundation in a mountain of “subpoenas, depositions, and discovery demands.”

“We have six full-time attorneys and a paralegal,” according to the Freedom Foundation’s managing attorney, Greg Overstreet. “And I mean full doggone time, because of the onslaught. It’s breathtaking, and I’ve been around the block.”

By mid-May the assault had cost the Freedom Foundation about $1.4 million in legal fees. Still the plucky nonprofit has chosen to fight on despite the SEIU’s mounting campaign of “lawfare”—warfare by legal means—launching several on-target counter-suits.

Michigan reversed its Medicaid dues skimming scheme completely after Republican Governor Rick Snyder replaced Democratic Governor Jennifer Granholm in 2011, but much damage had already been done. The Michigan SEIU affiliate collected an estimated $34 million dues before the program ended. There was a price to pay, however: Since then SEIU Healthcare Michigan (the statewide mega-local for Michigan) has lost over 40,000 members, thanks in part to the passage of much needed right-to-work legislation.

Needless to say, the SEIU has had its share of scandals. The juiciest of these hit in 2008, when Tyrone Freeman, head of a California long-term care workers local and Andy Stern ally, was found guilty of 14 counts of embezzlement, tax law violations, and mail fraud. Besides directing $600,000 in contracts to his wife, Freeman used union dues to pay for his cigar club membership and put $8,000 in wedding expenses on the union credit card!

Also, Dana Cope, executive director of the State Employees Association of North Carolina-SEIU Local 2008, was discovered by a newspaper investigation to have improperly directed funds from the union’s treasury to his landscaping company.

Part IV of “Inside the SEIU” explores how the union funds organizations of the radical Left.

Read Part One on SEIU’s Leftist origins, and Part Two on its campaigns of intimidation.