Inside the SEIU: Leftist Origins 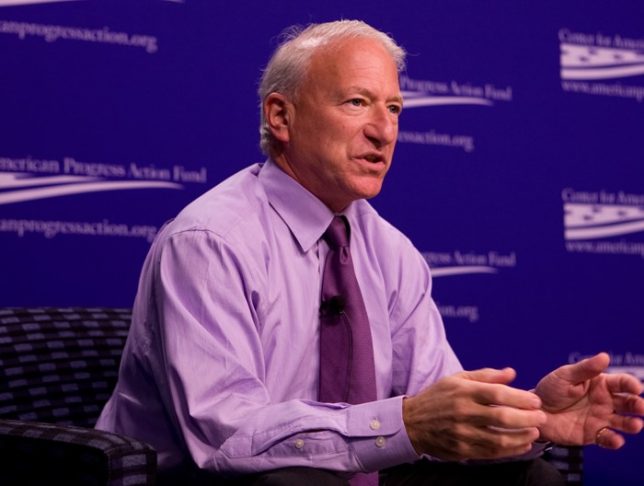 Summary: The Service Employees International Union is a mainstay of the professional Left and Big Labor. In Part One of “Inside the SEIU,” we examine the union’s origins and how it came to dominate Big Labor and the left-wing agenda through the influence of its aggressively political president, Andy Stern.

The Service Employees International Union (SEIU), one of the largest labor unions in the United States and Canada, is infamous for its controversial agenda and political activism. While the union was created to represent the building service trades, including janitors, security officers, and food service workers, it eventually expanded into the healthcare and government worker sectors. This expansion has made SEIU one of the most prominent players in left-wing politics and the broader progressive movement.

That the SEIU offers major financial support to the Left and the Democratic Party is a given. It is also the largest organizational federal spender in the United States. As such, SEIU often involves itself in high-profile campaigns against businesses and conservative groups.

But despite its huge numbers and vast pocketbook, the SEIU has recently encountered several serious setbacks—signaling that all is not well in what many call the “Purple Palace.”

The SEIU was founded in Chicago, Illinois as the Building Service Employees Union (BSEU) in 1921, which grew out of a number of local janitors’ unions. At first limited to janitors, elevator operators and window washers, the BSEU metastasized following a 1934 strike in New York City’s Garment District. From this point on its focus shifted from Chicago and away from elevator operators and such, towards healthcare workers across the country. The union took up its current name in 1968 and became affiliated with the American Federation of Labor (later the AFL-CIO). SEIU expanded rapidly in the 1980s, merging with four other unions, eventually becoming the largest union under the AFL-CIO umbrella.

Much of that growth was pushed by SEIU president John Sweeney, who took over in 1980. Sweeney aggressively shifted approximately 30 percent of the union’s expenditures towards recruitment of new members; by the time he left office, membership in the union had risen from 625,000 to 1.1 million. Sweeney also expanded the SEIU deeply into the public sector, adding the California State Employees Association into the union as Local 1000, SEIU. Sweeney also brought the SEIU into close association with the leftist Associations for Community Organizations for Reform Now (ACORN)—a relationship maintained until ACORN shut down in 2010.

When he made his successful bid for AFL-CIO president in 1995, Sweeney left a legacy of increasing SEIU political activism and an association with the progressive wing of the Democratic Party. He consistently advocated for mandatory paid family leave and raising the federal minimum wage—a direct antecedent to the modern SEIU’s “Fight for $15.”

Andy Stern, a Sweeney protégé, won the election for SEIU president in 1996. Stern took office seeking to increase membership, expand his union’s political influence and ameliorate what had become a culture of corruption. During his fifteen years at the helm, the SEIU political action committees became the largest organizational spenders in American politics and vital financiers of the Democratic Party.

With the help of Stern’s close ally, President Barack Obama, SEIU proved largely successful in advancing the Big Labor agenda. The two first met through their overlapping Illinois connections; they were so close that Stern was the most frequent visitor reported in White House logs in the first six months of the Obama administration at 22 visits—seven of which were meetings with the President. In comparison, the number two visitor—another labor union chief, AFL-CIO president Richard Trumka—only visited the White House seven times. By February 2011, Stern had made visits to the Obama White House a whopping 53 times.

In 2008, SEIU spent $85 million backing Democratic candidates, $60 million of which went to supporting Presidential nominee Barack Obama with advertisements, door-to-door canvassing and voter registration efforts. In 2012 the Wall Street Journal acknowledged the SEIU as the Democrats’ top spender after the union spent $70 million, surpassing the measly $54 million spent by President Obama’s main super PAC, Priorities USA. 300,000 SEIU members reported donating an average of $7 per paycheck to political activism, on top of their dues.

During the Obama era, the SEIU focused on pushing through aggressive left-wing policies, particularly the 2010 Patient Protection and Affordable Care Act, better known as Obamacare. Stern was an early adopter of the plan to expand government control of one-sixth of the U.S. economy under Obamacare, calling it the Democrats’ “path forward” and “a major achievement the American people need and deserve.” He focused the SEIU’s resources on passing the healthcare overhaul by mobilizing tens of thousands of union members with pro-Obamacare rallies and marches. Stern did not hesitate to threaten congressional Democrats should they dare to vote against the bill. Fearing the SEIU would back liberal Republicans or even third-party candidates, many Democrats up for reelection opted to take the union donations—and vote the union line. As CRC reported at the time:

“New York Democrat Mike McMahon was visited by a top SEIU official and told that he won’t get union funding if he votes ‘no,’” reported Wall Street Journal political columnist John Fund. “Indeed, union representatives hinted they might look for a primary challenger or third-party candidate to run in his Staten Island district.”

McMahon did vote no and lost re-election in 2010 to Republican Michael Grimm. The ubiquitous Stern was later called one of “the chief architects of healthcare reform,” and was ranked one of the top 10 influencers in the American healthcare system.

Split with the AFL-CIO

Under Stern, SEIU membership grew at a tremendous rate into an “empire of purple-clad followers,” as one journalist at RedState put it, but relations with the AFL-CIO deteriorated. Frustrated by the AFL-CIO’s inability to halt the steady decline of union membership, in 2005, Andy Stern’s SEIU and James P. Hoffa’s International Brotherhood of Teamsters voted to leave the 50-year old federation and start their own federation, “Change to Win.” Together, they took 3 million members and $20 million in annual dues with them.

“Our world has changed, our economy has changed, employers have changed. But the AFL-CIO is not willing to make fundamental change,” Stern opined at the time. AFL-CIO president John Sweeney raked Stern’s withdrawal as “a grievous insult to all the unions,” but the damage was done.

Stern’s efforts to reform the union’s culture and root out corruption proved less successful: The end of his term was marred by scandal surrounding Stern’s former ally, Tyrone Freeman, who was implicated (and later convicted) in a financial scandal following Stern’s handing over control of a large California local union.

The SEIU’s connections with the far-left activist organization ACORN also rocked the union. In 2007 ACORN—which received some $53 million in federal funding to help poor Americans buy homes and register to vote—was exposed for some 30 counts of financial malfeasance in nine states. Dale Rathke, brother of Wade Rathke (former president of the SEIU Southern Conference and a past member of the union’s International Executive Board), embezzled nearly $1 million from ACORN. Amazingly, ACORN declined to press charges. Stern was himself investigated by the FBI, although no further action was taken.

Part II of “Inside the SEIU” will examine the union’s leadership structure and its infamous “comprehensive campaigns.”