Inside the SEIU: Funding the Left 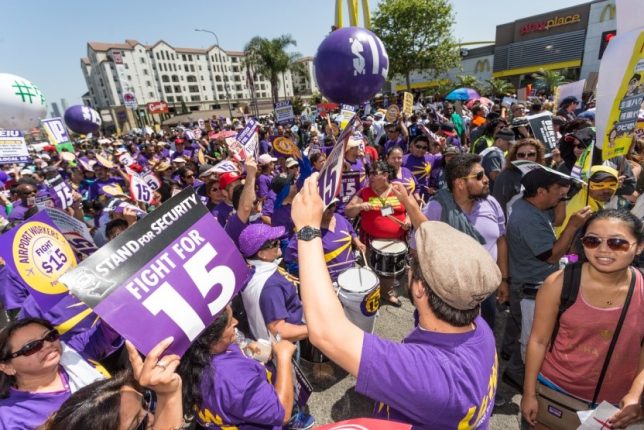 Read Part One on SEIU’s Leftist origins; Part Two on its campaigns of intimidation; and Part Three on SEIU’s dues-skimming schemes and more.

Summary: The Service Employees International Union is a mainstay of the professional Left and Big Labor. In Part Four of “Inside the SEIU,” we investigate how SEIU funds the progressive agenda and political candidates of the Left.

The SEIU is a major funder of progressive organizations out of its dues-collected revenues, and is a founding member of the Democracy Alliance (DA). In 2015 it funded the DA to the tune of $295,000. Other SEIU-funded liberal groups include:

The SEIU also funds a bevy of local groups created to support its corporate campaigns, such as New York Communities for Change, Action NC, and Good Jobs Now, all of which are active in the Fight for $15. Many of these groups are successors to the now-defunct ACORN network.

According to the Center for Responsive Politics, the SEIU is the largest funder of political action committees (PACs) in the U.S. In total the union has spent over $270 million on federal politics, almost exclusively on behalf of PACs supporting Democrats and progressive causes. Unfortunately, because of its sheer size, the SEIU is able to mobilize huge numbers of members, providing Democrats with volunteer canvassers and voter transportation services on a scale unmatched by conservatives.

The SEIU, a major player in state and local elections, has spent over $67 million aiding Democrats and union-friendly causes. In New York, 1199SEIU has been called the “union that rules New York” for its ability to cajole Republican and Democratic politicians into supporting its Big Labor agenda. 1199SEIU played a critical role in electing New York Mayor Bill de Blasio, earning what the New York Times calls “a direct pipeline to City Hall…that most unions could have only dreamed about.” De Blasio, a little-known radical with ties to the left-wing Working Families Party, rocketed to the top of the 2013 Democratic Party primary for Mayor of New York City thanks to $2 million from the SEIU. It has also supported Democratic-aligned mayors in Houston (Sylvester Turner), Philadelphia (James Kenney), and other major cities.

State ballot initiatives which call for higher minimum wages and tax hikes also receives the special attention of the union. Its national chapter funds the Ballot Strategy Center (BISC)—a group dedicated to using ballot measures to advance the liberal agenda–with hundreds of thousands of dollars each year spent to support left-wing ballot measure campaigns. The SEIU was a key funder of the $15 minimum wage initiative of SeaTac, Washington—a city of 28,000. That measure was widely criticized, however, for a loophole allowing collective bargainers like the SEIU to pay its own members less than the local minimum wage.

These campaigns are also directly related to increasing membership and state funding, as clearly seen in the 2012 ballot initiative in Michigan to restore Medicaid dues skimming. That measure cost the union over $5 million, only to fail—with the SEIU’s attempts to conceal its involvement accruing nearly another $200,000 in state fines.

In 2005, the SEIU funded opposition to several California ballot initiatives proposed during a special election by then-Governor Arnold Schwarzenegger affecting union dues and teacher tenure requirements, among other things. The local SEIU raised $12 million from members for its political fund, but did not give agency fee payers a chance to opt out of paying for the political fund. This led to a lawsuit that went all the way to the U.S. Supreme Court in Knox v. Service Employees International Union, Local 1000. The union lost again, with the Court ruling that special political assessments must be opt-in for nonmembers forced to pay union fees under state laws.

Amalgamated Bank represents perhaps the SEIU’s most nefarious form of political involvement. The bank has been union-owned since 1923; SEIU took the bank from Unite HERE after a brutal split within that union saw a faction move to the SEIU as Workers United, SEIU in 2010. Amalgamated Bank has since become the bank of choice for progressive PACs and Democratic committees, including the Democratic National Committee, the Democratic Governors Association, and the super PAC Ready for Hillary (now Ready PAC). The DNC has borrowed up to $15 million from Amalgamated, and as recently as November 2015 had $2 million in outstanding loans.

The Service Employees International Union is a solid pillar of the radical Left—a labor union able to churn out millions of dollars and an army of volunteers to advance the progressive agenda. Although the last year has brought serious setbacks, SEIU remains a powerful player. Despite its vast influence, however, the future may turn out far bleaker than its leaders care to admit: The union movement continues to decline as the modern workforce renders its negotiation model obsolete and political efforts reduce misguided union privileges.

Read Part One on SEIU’s Leftist origins; Part Two on its campaigns of intimidation; and Part Three on SEIU’s dues-skimming schemes and more.