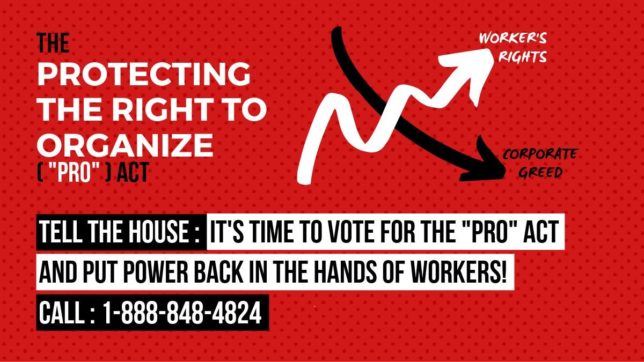 This week—most likely today—the U.S. House of Representatives will vote on one of the most radical pieces of legislation in recent memory. The Protecting the Right to Organize Act or PRO Act is a wish list of major priorities for labor unions seeking to coerce more American workers into paying union dues. It will likely be slipped through the House that Big Labor spent millions helping elect, while the American political system focuses on the aftershocks the Senate’s acquittal of President Donald Trump, the State of the Union address, and the continuing fallout from the Democratic Iowa Caucus vote-counting fiasco.

The PRO Act’s proponents should be pleased that few are paying attention because the deceptively named PRO Act comes laden with unpopular and economically destructive proposals. Proving that the PRO Act is primarily about increasing the number of involuntary union dues payers, the PRO Act would override all state right-to-work laws in the private sector. And while it does not explicitly abolish the secret ballot in unionization elections, it would give the National Labor Relations Board the power to set aside a secret ballot election a union lost and declare the union the winner based on cards submitted.

But more consequential are other provisions in the PRO Act that threaten worker jobs and flexibility. Like California’s controversial (union-supported) Assembly Bill 5, which wrecked the livelihoods of independent contractors and freelance writers, the PRO Act would require more types of work to be done by (unionizable) formal employees rather than independent entrepreneurs. Workers often choose to be contractors because it allows them more freedom to set their own hours, side jobs, and other terms of work. Unions prefer the regimentation and dues payments of formal employment.

Secondary Boycotts and Other Union Favors

The PRO Act would also repeal prohibitions on “secondary boycotts,” expanding unions’ coercive power over the broader economy to levels not seen since the massive disruptions of 1945–46. Current law confines most unionized labor disputes to the direct relation between an employer and workers. The PRO Act would allow unions to strike, picket, and conduct other disruptive industrial action against third-party businesses, allowing them to severely disrupt economic activity.

Then there are all the other small favors, including codifying Obama-era Labor Board decisions that redefined “joint employment” to make franchised businesses easier to unionize, shortened the timeframe for campaigning in unionization elections, and enabled union organizers to get employees’ private personal contact information.

While the bill will almost certainly die in the Senate, it is a clear warning. After years of defeats in state-level public policy (e.g., Wisconsin, Michigan, and Kentucky—all newly minted right-to-work states) and decades of rejection by increasing numbers of American workers, Big Labor is turning to its last resource: federal coercion enacted by the political Left.

I Do Not Want the NewsGuild Bargaining for Me, Ever