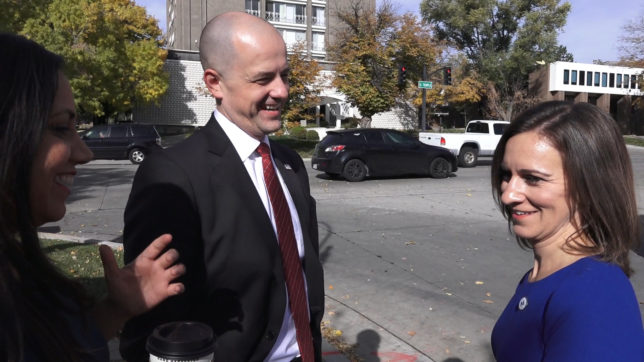 For a self-styled “conservative,” failed 2016 presidential candidate Evan McMullin sure has some far-left ideas.

The NeverTrump activist and his running mate, Mindy Finn, run a pair of advocacy nonprofits created in the wake of the 2016 election which claim to “defend democratic norms and institutions,” that are supposedly threatened by President Trump. And if you believe McMullin’s interviews with Vox and The New Yorker, they’re the tip of the spear for a “new conservative movement” trying to “save democracy” from the democratically elected Trump.

But in the two years since McMullin and Finn created these groups—the lobbying shop Stand Up Republic and its fundraising arm, Stand Up Republic Foundation—they’ve only succeeded in taking money from the Left to push its policies.

In March, I documented the two leftist funders bankrolling McMullin’s NeverTrump operations: the Hewlett Foundation and eBay founder Pierre Omidyar, through his vehicle Democracy Fund Voice. Altogether these groups have given nearly $2 million to McMullin’s groups, according to InfluenceWatch.

Since then, both McMullin and Stand Up Republic have slid ever further into Progressivism.

Earlier this month, Stand Up Republic released its “Electoral Reform Agenda,” which reads suspiciously like the Democratic Party’s own notorious electoral wish list, H.R. 1 (also called the “For the People Act”).

In fact, the two agendas are so similar it’s uncanny. They both demand that all states use California-style “independent commissions” when drawing congressional maps, a process that occurs after every census called “redistricting.” That’s a policy beloved by groups like the Brennan Center for Justice, which rail against supposed Republican gerrymandering of congressional maps.

H.R. 1 goes a step further: automatic and same-day voter registration up to mere moments before Election Day, inviting a maelstrom of voter fraud problems for the estimated 50 million new voters who would be automatically enrolled under the bill, many drawn from databases of state and federal welfare recipients.

Both Stand Up Republic and H.R. 1 favor banning electronic voting machines in favor of paper ballots. If that sounds innocuous, consider what that’s done in California, which already mandates such schemes.

The Wall Street Journal noted in 2018 that California Democrats employed a deadly combination of same-day voter registration, automatic enrollment, and mail-in paper ballots—often harvested in-person and turned in by Democratic campaign staff—to wipe out the already tiny Republican minority in the state. According to the Journal:

Voters in a 2017 special election for an open seat in the California state Assembly reported activists harassed them at their doors to fill out ballots for specific candidates and hand them over.

This creates opportunities for harvesters to “help” voters complete their ballots, or even pay to finish them, and it’s easy for the unscrupulous to lose ballots they think may go for the wrong candidate. This is why ballot harvesting is illegal in many states, or at least limited to drop-offs by family members.

Speaking of Election Day, both Stand Up Republic and H.R. 1 would make Election Day a national holiday.

But the most egregious “reform” supported by Stand Up Republic is ranked-choice voting, a system of casting ballots heavily favored by the liberals who believe it will favor their candidates. While H.R. 1 does not explicitly legislate a ranked-choice voting system, a clause in the bill tees it up by enabling the “ability of replacement systems to administer ranked choice elections.”

In a ranked-choice (or instant runoff) voting system, voters number every candidate by preference: choice 1, choice 2, choice 3, etc. The candidates who receive the least “first choice” ballots are then dropped, round after round, and their “points” given to the next-highest candidate until one wins a majority of votes.

The ranked-choice system is pushed by FairVote, a Washington, D.C.-based advocacy group that also pushes for the abolition of the Electoral College in presidential elections. Stand Up Republic and FairVote are allies in pushing such left-wing electoral “reforms.” McMullin and FairVote president Rob Richie hosted a June 18th panel in D.C., in which panelists accused Trump of leading “rising authoritarianism” in the United States.

McMullin’s own anti-Trump advocacy has landed him squarely in the professional Left. He recently joined the board of Citizens for Responsibility and Ethics in Washington (CREW), an infamous agitation group that vowed to spend $40 million “to fight Trump” in 2017.

“Preserving our ethical standards and demanding accountability for political corruption are essential to liberty and justice in America,” McMullin said in a press release. “I’m proud to join CREW’s board to further this bipartisan cause.”

“Bipartisan” is stretching the word. CREW’s most prominent board member is David Brock, a Republican-turned-Democrat political operative who runs a network of anti-Republican attack groups. And CREW’s biggest funder is the left-wing Bohemian Foundation created by Patricia Stryker—a billionaire mega-donor whose cash helped turn Colorado into a Democratic Party stronghold. Stryker is also credited with co-founding the Democracy Alliance, a donor affinity group for high-level funders on the Left.

There very little that’s left of McMullin’s professed conservativism when his nonprofit work is considered. In his eagerness to “resist” President Trump, McMullin abandoned his small government principles. These days, he looks and sounds more like a mainstream Democrat than a third-party conservative presidential candidate.