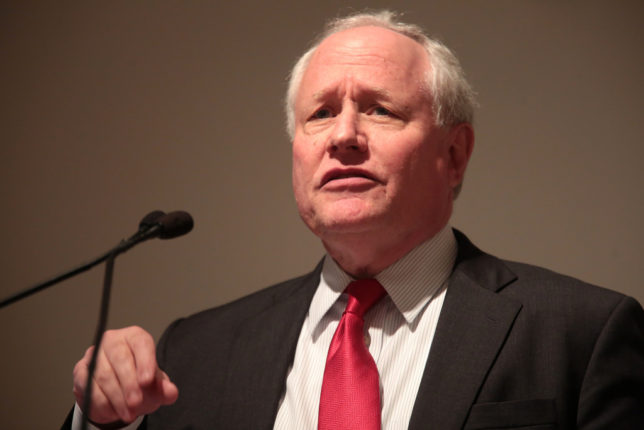 Most political observers know that Trump critic and former Weekly Standard editor Bill Kristol launched groups that receive funding from left-wing heavyweights, but Capital Research Center has uncovered another #NeverTrump network that is also funded by the Left. Clearly, the schism among conservatives revealed by the #NeverTrump movement is something many on the Left are eager to use to their advantage.

The Kristol story began last fall when Julie Kelly exposed in American Greatness a pair of advocacy nonprofits he founded. Kristol’s 501(c)(4) advocacy group Defending Democracy Together was promised at least $600,000 in grants over one year from the leftist Democracy Fund Voice, created by Ebay founder and left-wing financier Pierre Omidyar. In September, the left-of-center Hewlett Foundation granted another $150,000 to the group’s 501(c)(3) arm, the Defending Democracy Together Institute.

Omidyar’s Democracy Fund Voice normally funds leftist causes, including the “dark money” giant Sixteen Thirty Fund and the anti-free market group Free Press, which is run by Robert McChesney, an avowed socialist and net neutrality advocate. In 2016, Omidyar—a Hillary Clinton donor—took it a step further and donated at least $250,000 to a political action committee called the NeverTrump PAC, which spent nearly $182,000 in independent expenditures against the Republican presidential nominee. (NeverTrump PAC does not appear to be affiliated with Kristol.)

However you feel about the President, there’s no question that Kristol’s two NeverTrump nonprofits are funded by leftists who oppose not simply the President but also his Administration, including policy goals the Administration advances that should be supported by any conservative, such as non-activist judges and deregulation.

The Bulwark, an opinion website founded by ex-Weekly Standard staffers and housed at Defending Democracy Together Institute, is a perfect example. The Bulwark could reasonably be accused of being Trump-obsessed; after all, its founding statement accuses the President’s supporters of backing “a serial liar, a narcissist and a bully, a con man who mocks the disabled and women, a man with no fixed principles who has the vocabulary of an emotionally insecure 9-year-old.” The website has recently received substantial criticism even from Trump skeptics like Michael Brendan Dougherty of National Review Online and Varad Mehta of Arc Digital.

CRC has just unearthed yet another branch of the #NeverTrump world which receives left-wing funding: a NeverTrump coalition led by failed 2016 presidential candidate Evan McMullin and his running mate, Mindy Finn. Their groups, Stand Up Republic and Stand Up Republic Foundation (formerly Stand Up Ideas), are also funded by Omidyar and the Hewlett Foundation.

The McMullin network has connections to Kristol’s network through talk show host Charlie Sykes, editor-in-chief of The Bulwark. Sykes is a Defending Democracy Together Institute board member, a board member for McMullin’s Stand Up Republic, and a national advisory board member for Omidyar’s Democracy Fund.

Finn and McMullin’s NeverTrump network is not only funded by the Left and dedicated to taking down the Trump administration, but it also aims to reverse mainstream conservative policies and America’s constitutional framework. This network pushes for overturning the Supreme Court’s Citizens United decision, ending so-called “gerrymandering” by redrawing congressional maps to (presumably) favor Democrats, enacting redistributionist policies to address “economic inequality,” and even pursuing schemes that could abolish the Electoral College and the U.S. Senate.

As McMullin’s group put it in a 2018 report, Americans must “review how our democratic structures should work in a time of division and social change” when “the Senate . . . and the Electoral College can deny the majority the ability to govern.”

That same year Stand Up Republic Foundation paid out $222,305 in “management consulting” and “advertising fees” to the little-known, privately held for-profit firm McMullin Finn LLC, whose owners appear to be Evan McMullin and Mindy Finn, according to the group’s IRS filing.

Stand Up Republic Foundation only reported $501,250 in revenues in 2017. In other words, the Hewlett-funded nonprofit gave almost 44.4 percent of its revenues to McMullin Finn LLC.

In May 2018, Hewlett reported another $250,000 grant to Stand Up Republic Foundation through its Madison Initiative that aims to reduce “political polarization.” Of course, liberal foundations usually see polarization as mainly a problem produced by conservatives, and CRC president Scott Walter warned in 2015 that the Madison Initiative could end up with its thumbs on the scale, benefitting the Left. Sure enough, other Madison Initiative grant recipients include left-wing powerhouses like the Brennan Center for Justice, which seeks to overturn Citizens United; the Center on Budget and Policy Priorities, which is partially funded by George Soros’s Democracy Alliance; and Common Cause Education Fund, the fundraising arm of the “fair redistricting” advocacy group Common Cause.

“Defending democracy” apparently means soliciting support from left-wing activists and Democratic politicians. In February 2018, Stand Up Republic co-sponsored an exclusive National Summit for Democracy at which the Washington Post spotted Sens. Sheldon Whitehouse (D-RI) and Jeff Flake (R-AZ), as well as representatives from Omidyar’s Democracy Fund and the far-left groups Indivisible and MoveOn.org.

“Defending democracy” also seems to mean defeating Republicans. Stand Up Republic spent some $500,000 in 2017 urging Alabamians not to vote for Republican candidate Roy Moore, who ended up losing that year’s Senate special election. Moore was a highly controversial candidate criticized by many Republicans, but even liberal Washington Post reporter David Weigel raised an eyebrow over Stand Up Republic’s work: “In two 30-second spots, the group presents Moore as an unacceptable choice for conservatives—but does not suggest a particular alternative.” 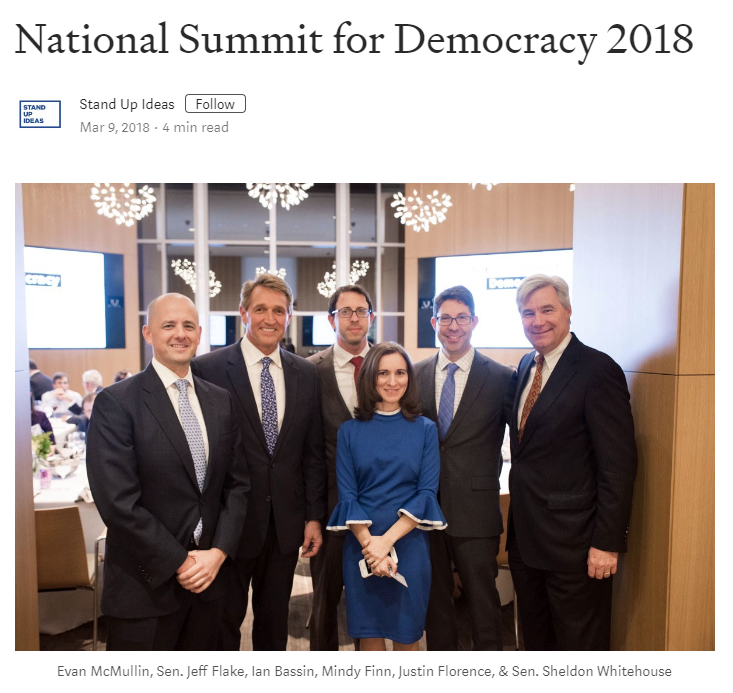 In 2018, Stand Up Republic released a scathing, 106-page report entitled, The Republic at Risk: American Democracy One Year into the Trump Administration (available at InfluenceWatch). The report accuses Trump of “exhibiting the habits and actions of a budding authoritarian”: “quashing dissent,” “delegitimizing communities” of minorities by “appeal[ing] to divisive and hateful strains in our society,” and “corrupting elections” in part by “refusing to condemn Russian interference in the 2016 election.”

According to the report:

While many have followed his [Trump’s] presidency as a seemingly unending series of unrelated scandals, a more coherent narrative shows that all of his unorthodox actions are part of a singular story of a president with disturbingly autocratic tendencies presiding over a democracy at risk.

The Republic At Risk was co-published with another obscure anti-Trump group, the Protect Democracy Project, this one striking from the Left.

Protect Democracy Project is headed by Ian Bassin, former associate counsel for the Obama White House. Its legal director, Justice Florence, was senior counsel to the Democratic wing of the Senate Judiciary Committee under Sen. Whitehouse. It even counts a former Weekly Standard staffer, Chris Deaton, in its ranks.

Its board of directors is well-connected to the professional Left. Ex-Obama administration official Cecilia Muñoz, for example, was senior vice president of UnidosUS (formerly the National Council of La Raza); last year she was appointed to the board of the U.S. programs division of George Soros’s Open Society Foundations.

Another board member, Ricki Seidman, was called in to advise Christine Blasey Ford, the California professor used by Democrats in their attempt to derail the confirmation of Justice Brett Kavanaugh last October.

Board member Emily Loeb is a practicing attorney who also served as associate counsel in the Obama White House. Sabeel Rahman is president of Demos, which championed the passage of Sen. Elizabeth Warren’s Consumer Finance Protection Bureau (CFPB) and opposed the confirmation of Justice Neil Gorsuch to the Supreme Court. And Sen. Chuck Schumer’s former chief counsel, Jeff Berman, is a Protect Democracy Project board member.

Unsurprisingly, the group received at least $100,000 from the Hewlett Foundation’s Madison Initiative.

And if you think it’s an accident that these NeverTrump elites are advisers to a leftist group, think again: Stand Up Republic Foundation’s own board of directors includes Yascha Mounk, a senior adviser to the Protect Democracy Project who bragged in August that “I thought democracy was in crisis before it was cool and people didn’t take that point seriously.”

Trump-skepticism is one thing. But this NeverTrump network is guilty of something much more extreme: taking money from leftists who want to rewrite the Constitution. That isn’t conservative or libertarian—it’s a deal with the devil.