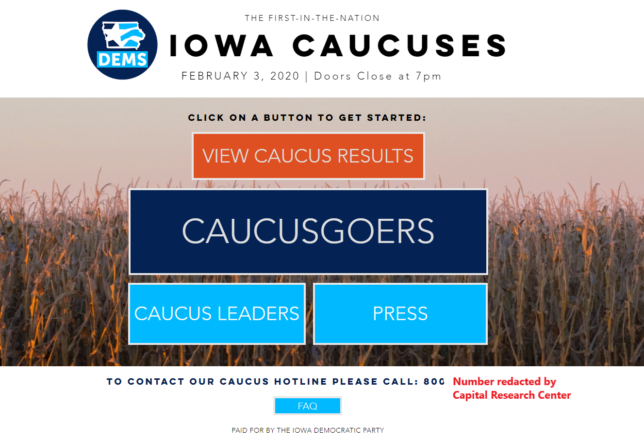 A new theory has emerged to explain the cascading incompetence that is the 2020 Iowa Democratic Caucus. But it’s an evergreen conspiracy theory: Trump did it.

This time, it was allegedly Trump supporters. An official from the Iowa Democratic Party has alleged that their election night “hotline” was clogged with crank calls from people voicing support for the president. The NBC News report explains the hotline that got you into the Iowa Democratic Party was “found by a simple Google search, both as screenshots and in plain text, alongside instructions” and then posted on the Intertubes by Trump partisans.

A Democratic official told NBC this added to their reporting delays:

Mandy McClure, communications director for the Iowa Democratic Party, confirmed that the hotline received “an unusually high volume of inbound phone calls to its caucus hotline, including supporters of President Trump.”

“The unexplained, and at times hostile, calls contributed to the delay in the Iowa Democratic Party’s collection of results, but in no way affected the integrity of information gathered or the accuracy of data sets reported,” McClure said in a statement.

Even the official explanation is a bad look . . . for Democrats.

Is the best case scenario that the political party that regularly fights to prevent the simplest of ballot security measures, such as the showing of photo-ID at polling places, has published their “break glass in case of emergency” hotline number in so many places that it was easily found on the internet and published by political opponents when the caucus site captains needed it most?

It could be worse. And it might be. The number published on the main page for the Iowa Caucus is it still there, days later.

As of the posting of this blog—and well before the chaos began over Iowa’s botched caucus—a toll free “800” number listed as a “caucus hotline” was clearly showing on the entry page for the Iowa Caucus website and on at least one linked page. It appears just above a disclaimer noting it was “Paid for by the Iowa Democratic Party.”

Is this EXACTLY the number Iowa Democrats claim was maliciously posted by the Trump fans? That’s difficult to know until someone who has the one number compares it to the second.

But was this number posted on their official caucus webpage likely used by frustrated party officials who couldn’t get through on election night? Almost certainly it was.

Might some troublemakers have taken advantage of this carelessness and helped people use the official number the Democrats provided to the world to clog the Democratic Party lines? You betcha.

Should we interpret anything about the integrity of the Iowa Caucus from the fact that at least one caucus “hotline” is still widely promoted on an official caucus website half a day AFTER Iowa Democrats began complaining that their “hotline” was compromised?

Yeah, we should. And it’s not pretty.