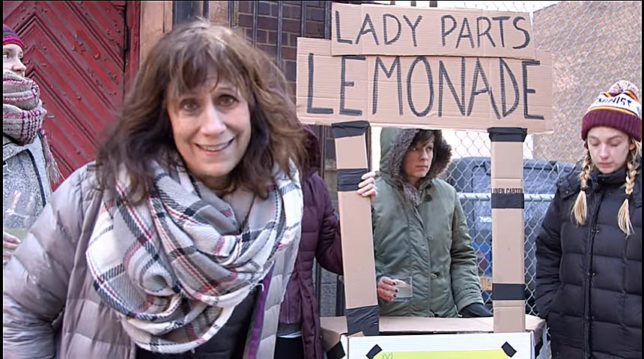 https://www.theswervemagazine.com/Lizz_Winstead_Lady_Parts_Justice_League_Vagical_Mystery_Tour_Funhouse_at_Mr_Smalls_July_19_Pittsburgh_The_Swerve_Magazine.html Screenshots from The Swerve Magazine, 2017
by Jonathan Gonzalez

Abortion is no laughing matter, despite what Lizz Winstead and her group the Abortion Access Front want you to think. Winstead, since 2016, has led a “dark money” pro-abortion comedy troupe and advocacy organization called Abortion Access Front. It runs a comedy tour—the Vaginal Mystery Tour—to raise awareness for abortion access.

Abortion Access Front is a rebranded name for Winstead’s brainchild: Lady Parts Justice League. This “coven of hilarious badass feminists who use humor and pop culture to expose the haters” aims to increase awareness of their radical pro-abortion agenda. Winstead herself is proud of her abortion and wants to “normalize” the practice.

Organizations like the ACLU claim that abortion access is “under attack”, and Winstead wants to be at the forefront of activism—as opposed to her previous role as “anger fluffer.”

While the Abortion Access Front appears like a standalone charity, it is actually a project of NEO Philanthropy. As one of NEO Philanthropy’s projects, Abortion Access Front is a drop in the vast ocean that is NEO’s budget. The system of incubation is nothing new. The concept was pioneered by the Tides Foundation in the late 1970s, which spawned the left-wing standbys Natural Resources Defense Council and People for the American Way. What is unique about NEO Philanthropy—a pass-through nonprofit created in the 1980s and funded by foundations on the Left—is that it often takes on these projects without intending to release them. Organizations like Abortion Access Front just work under NEO’s IRS designation and proclaim to be a “bona fide 501(c)(3) nonprofit with funding and employees.” This circumvention of IRS statutes helps hide the donorship to these more radical activists and allows charities like NEO to maintain a positive, more moderate public image.

In its dual-organization structure, we uncovered that the group has ties to not one, but two enormous left-wing “dark money” networks. Aside from NEO Philanthropy, Abortion Access Force was incubated as a project of an obscure group—Creative Majority—and transferred to the Sixteen Thirty Fund, the lobbying arm of Arabella Advisors’ “dark money” empire.

Arabella Advisors orchestrates a vast web of money between two of its for-hire nonprofits, the Sixteen Thirty Fund and the New Venture Fund. New Venture Fund serves the analogous role to NEO Philanthropy for Arabella, spawning projects that pop-up and disappear at a moment’s notice to create the appearance of civic engagement and grassroots activism. Sixteen Thirty creates activist organizations and—with its 501(c)(4) designation—does not have to disclose its donors, which is why such groups are often labeled “dark money” organizations. Systems like this are set up so these organizations can work in tandem. New Venture Fund spawns projects and attracts funds because donors can make tax-deductible donations while Sixteen Thirty Fund has greater lobbying capacities and can act more directly in politics.

So, why was this shady group in need of a rebrand? According to Abortion Access Front’s “About Us” webpage, “… the name was narrow, alienating, and just plain hurtful to many. I want to apologize to all who felt excluded or othered by it… Let’s be clear: not all ladies have uteruses. And not everyone with a uterus identifies as a lady. Full stop.”

While Abortion Access Front is issuing apologies for offending other pro-abortion activists, it might also consider apologizing for running a shady nonprofit born from the Left’s “dark money” excess. Full stop.