By Hook or By Crook: Living Lavishly 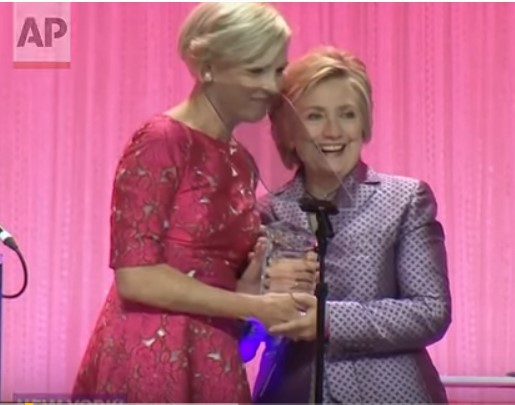 In October 2015, The Los Angeles Times reported that, while Hollywood donors were vocally split over the candidates in the 2016 Democratic Party primary, 90 percent of the $5 million in donations from the industry went to Hillary Clinton. Credit: AP Archive (YouTube screenshot). License: https://goo.gl/4ixM1a.
by Martin Morse Wooster

Bloomberg and Clinton were scheduled to present the alliance at a meeting of climate change activists in Sao Paulo, Brazil. Bloomberg told the New York Times, “I have always thought we should have a relationship based alphabetically on our last names.” According to an anonymous source at the Clinton Foundation, Bloomberg “…came to us. What are we going to do, fight them? They have the money; the golden rule applies,” which the Times explained was “as in, he who has the gold, rules.”

Bill Clinton turned 65 in 2011, and Bill, Hillary, and Chelsea Clinton spent an October weekend partying in Los Angeles. Donors who contributed between $500,000 and $1 million got a weekend brunch at the home of Haim and Cheryl Saban and an afternoon of golf with Bill Clinton. Even $50 donors could get nosebleed seats in the Hollywood Bowl.

The high point of the weekend was “A Decade of Difference: A Concert Celebrating 10 Years of the William J. Clinton Foundation,” which featured Usher, Bono, Stevie Wonder, and Colombian singer Juanes.

Lady Gaga declared that she was having her “first real Marilyn moment” serenading the former president, adding, “I always wanted to have one, and I was hoping that it didn’t involve pills and a strand of pearls.” She changed the song “Bad Romance” to “Bill Romance,” and concluded by telling Clinton, “I love you and your hot wife.”

“I thought, ‘My God, I get Lady Gaga, and I will have a heart attack celebrating my 65th birthday,’” Bill Clinton said.

Also shown at the concert was “Clinton Foundation: Celebrity Division,” a sketch directed by Christin Trogan and written by Alex Fernie for the comedy website Funny or Die. The premise is that a bunch of celebrities led by Ben Stiller are gathered in a room for a brainstorming session. Kristen Wiig declares that the foundation should launch a “Global Breathing Initiative” in which everyone holds his or her breath for a minute a day to reduce carbon dioxide. Ted Danson says the foundation should encourage people to “perform 72,000 hours of entrepreneurial initiative,” until Stiller says, “You’re just reading from a Clinton Foundation brochure.” Sean Penn just wants people to stop stealing his lunch from the staff refrigerator. Jack Black takes out a guitar and sings, “The Clinton Foundation, fighting global issues with business-minded solutions/A decade of difference is a whole lot of difference, it’s ten whole years of difference.”

The phone rings, and it’s Bill Clinton, who praises everyone and tells them to come up with more ideas. Except it’s not Bill Clinton, but Kevin Spacey. Clinton then enters his office and sees Spacey.

“What did I say about making crank calls from my office?” Clinton scolds.

“Don’t do it…without me!” Clinton says, smiling and holding a bag with Sean Penn’s sandwich.

In 2012, the Clinton Foundation had one of the quietest years in its history. The foundation started one new program, working with Verizon, General Electric, and Tenet Healthcare on programs to advance wellness programs in corporate workplaces. The foundation also had one disastrous fundraising party and had to deal with one new questionable donor, this time from Australia. And it also had to adjust to Chelsea Clinton’s increased prominence in the foundation and begin working out what Hillary Clinton’s role in the foundation would be after she left the State Department. The issue that was to be so explosive in 2016—whether Clinton Foundation donors had tried to influence Secretary of State Hillary Clinton—did not arise in 2012.

The questionable Australian donation to the Clinton Foundation came from the Global Carbon Capture and Storage Institute, established by the Australian government in 2009 following a memorandum of understanding between the Clinton Foundation’s Clinton Climate Initiative division in 2008 and the Australian government to fight climate change. A 2012 investigation by The Sunday Age found that this nonprofit had been allocated A$235 million by the Australian government and spent A$122 million, including A$10 million in a grant to the Clinton Foundation and A$54.3 million on “operational expenses,” such as first-class travel to conferences in France and Japan, where the institute’s staff stayed in five-star hotels. “The Sunday Age,” Lenore Taylor reported, “believes there is deep concern about what Australia is actually achieving from these contracts” to fight climate change.

A second Clinton Foundation grant by the Australian government of A$550,000 in September 2012 to deal with capturing carbon dioxide in Kenya was denounced by the opposition Liberal Party environment spokesman Greg Hunt, who said, “It’s completely inappropriate for the Treasurer (i.e., the treasury secretary) to be playing in partisan US politics” by giving money to the Clinton Foundation in a presidential election year.

The disastrous fundraiser for Bill Clinton occurred in London in May 2012, where guests paid 125 pounds for a standard ticket or 1,000 pounds for a chance to meet Bill Clinton at a space near the Old Vic Tunnels. Many patrons spent an hour and a half waiting to get in, and when they arrived, one patron told the Daily Telegraph, “there was perspiration dripping off the walls and the place absolutely stank. It was like walking into a cave.” The patron said he left after an hour because “the place was too crowded, too unpleasant, and nothing had happened.”

In the conclusion of By Hook or By Crook, learn about Chelsea Clinton’s increased role in her parents’ empire.