By Hook or By Crook: Quid Pro Quo? 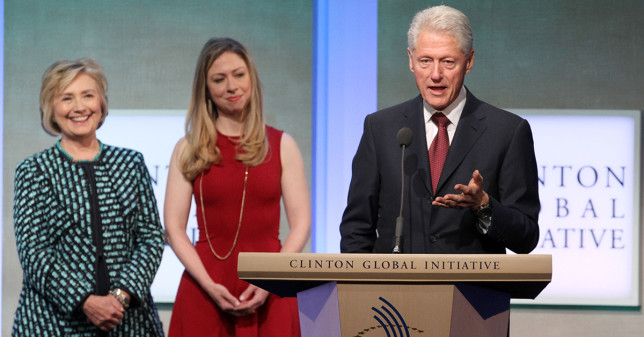 In January 2010, the Clinton Foundation listed its donors for 2009. Contributors of over $25 million included the Gates Foundation, Frank Giustra, and UNITAID, with contributors in the $10 million to $25 million range including the Australian and Norwegian governments and the Hunter Foundation. This was the last time the press examined the annual list of Clinton Foundation donors while Hillary Clinton was secretary of state.

Only one questionable Clinton Foundation donor made the news in 2010. Clinton Foundation trustee Sant Chatwal, a hotel magnate, was accused by three Indian businessmen who were his contractors of having them abducted in 2009 from the opening of a hotel in Cochin, India, and forcing them to sign statements that they would pay him 800,000 pounds.

In 2014, Chatwal was convicted of witness tampering and making $180,000 in illegal campaign contributions between 2007 and 2011, which included donations to Hillary Clinton’s presidential campaign in 2008 as well as to Sen. Christopher Dodd (D-Connecticut) and Rep. Kendrick Meek (D-Florida), who lost to Marco Rubio in a 2010 Senate contest. Chatwal contributed $200,000 to Hillary Clinton’s successful Senate bid and chaired “Indian Americans for Hillary” in 2008. Prosecutors said that Chatwal made a deal with contractors to have them pad invoices to allow individual donors to avoid limits to campaigns. In December 2014, Chatwal was sentenced to three years probation, fined $500,000, and required to perform 1,000 hours of community service.

In one secretly recorded conversation, Chatwal told an informant that when politicians “are in need of money…the money you give then they are always for you. That’s the only way to buy them, get into the system.”

Emails released by Judicial Watch in August 2016 show that on July 16, 2009, Huma Abedin emailed Chatwal about Hillary Clinton’s trip to India. “Just checking in,” Abedin wrote. “I’m sure you know we will be in mumbai on sat and sun Delhi sun night and Monday What are your plans?”

“Thanks for getting back to me,” Chatwal responded. “First of all Heartiest Congratulations for your engagement (to Anthony Weiner) I read about it in the Indian newspaper I am heading for New Delhi tonight I won’t be in Mumbai I will see you in Delhi How about dinner at your favourite restaurant Bhukhara Sunday night pls see if I could be part your list for the invites in Delhi Function. I will be staying in Maurya Sheraton.

“U will definitely be included,” Abedin responded. “We are doing an event in gurgaon on Sunday afternoon and then pusa which is an outdoor farm event. Those might be hard for you. Right?

“Maybe our town hall at delhi university on Monday? Also doing an embassy event taj monday morning. Does that work?

“Would love to do dinner, not sure yet which night. But sunday would be ideal. I’ll email u on Saturday when I know more. Ok?”

“I just landed in Delhi,” Chatwal responded on July 17, 2009. “Pl put my name down for every Function it will be fun to watch Hillary’S Visit.”

Emails released by Judicial Watch in February 2017 show that on November 12, 2009 Chatwal sent an email that was forwarded to Huma Abedin. “As you know,” Chatwal wrote, “(Indian) Prime Minister Dr. Mammohan Singh and President Obama are having a State Dinner. Any possibilities to include me and my wife for this dinner? If so, that would be really great. But if not, that’s ok too I totally understand.”

Huma Abedin responded a day later. “So nice to hear from you!,” she wrote. “Was going to send you an email myself. We have no control over the white house state dinner. But, Hillary is hosting the state lunch for the prime minister with vice president biden at the state department and you should be receiving your invitation to that soon. Will be the same day, nov. 24th. Hope all is well.”

Chatwal attended both the lunch and the dinner.

In the next installment of By Hook or By Crook, learn about the high profile connections the Clintons collected.