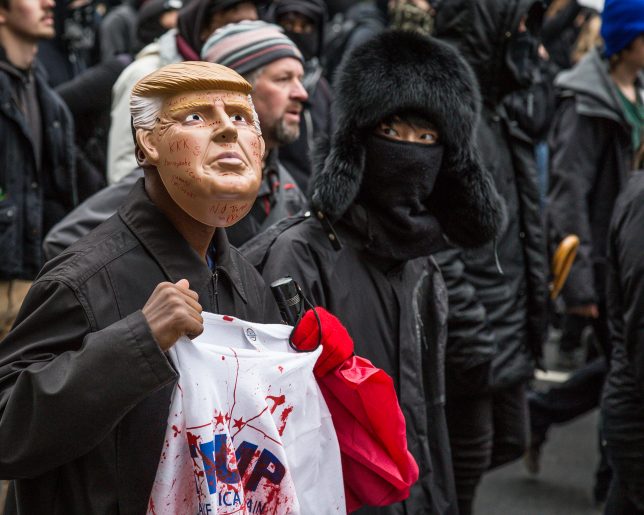 A Florida judge has sentenced a “black bloc” Inauguration Day rioter to four months in prison and two years of supervised probation for breaking business windows and throwing bricks, rocks and other projectiles at uniformed law enforcement officers.

31-year-old Dane Powell of Tampa, Florida, pled guilty  to throwing a “brick, large rock or piece of concrete” at uniformed law enforcement officers during post-inaugural riots in which hundreds of protesters—dressed in black—looted and fought with the police in the streets of Washington, D.C. Powell admitted to “being part of a group of rioters who moved approximately 16 blocks over a period of more than 30 minutes.” Assistant U.S. Attorney Jennifer Kerkhoff played a 10-minute video compilation of Powell breaking store windows and assaulting the police. Kerkhoff called Powell “a coward” and argued he went to Washington, D.C., during the inauguration with the express purpose of rioting. Kerkhoff described Powell as “among the most violent” of the 234 individuals arrested following the Inauguration Day riots. Powell had been seen the day before the inauguration in Logan Circle carrying gas masks, a hammer, and the same black flag he was identified with on the day of the riots.

On Inauguration Day, the anti-Trump tantrums in sections of Northwest Washington, D.C., included the damage of private property: burning a limousine and vandalizing a Starbucks and a Bank of America.

Capital Research Center’s own Dangerous Documentaries, in its film “America Under Siege: Civil War 2017” exposed the disruption and chaos that anarchist and socialist groups such as #J20 and others with ties to Hilary Clinton’s campaign and the Democratic Party had planned before the inauguration. Plans included blockading roads and public transit and preventing people from attending the inauguration.

The “black bloc” method refers to the practice of donning masks and black clothing to make it more difficult for police to identify individuals as rioters destroy property en masse. The tactic originated with West German squatters in the late 1970s and 1980s and became most noticeable in the U.S. during the 1999 World Trade Organization protests in Seattle. One black bloc declaration during the WTO riots stated:

“We contend that property destruction is not a violent activity unless it destroys lives or causes pain in the process. When we smash a window, we aim to destroy the thin veneer of legitimacy that surrounds private property rights.”

Leftist rioters used the tactic again in February at University of California Berkeley when conservative author and commentator Milo Yiannopoulos was scheduled to speak on campus. The university canceled the event because of the rioting which included the breaking of windows and setting fires.

Powell is the first of more than 200 protesters arrested in relation to the Inauguration Day riots to be sentenced, although he will likely not be the last.