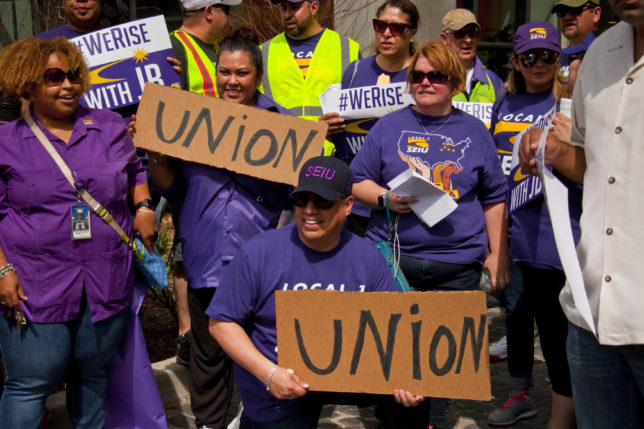 The right-of-center intellectual dalliance with left-labor activism has now long passed happenstance, breezed through coincidence, and arrived at enemy action. Completing the trifecta is a piece from Eli Lehrer of the R Street Institute (which one might recall is involved in the “eco-right” carbon tax campaign) in this week’s National Review.

Endorsing so-called “worker centers,” Lehrer makes the following claim: “A strategy of supporting groups that perform some functions of unions but not all does not mean cozying up to the AFL-CIO, the United Auto Workers, the Teamsters, or any other part of ‘big labor’ — just the opposite, in fact.” His assertion that worker centers are somehow not “part of ‘big labor’” does not stand up to even the most cursory scrutiny—and Lehrer’s own examples demonstrate this.

Lehrer’s first example is the Pioneer Valley Workers Center. A quick perusal of the senior staff page of the organization reveals that while the center may not formally be part of the (very corrupt) UAW, it is tied into the UAW alumni network. Rose Bookbinder, a “co-director and lead organizer,” brags that she was previously “a lead organizer for the United Auto Workers [. . .] and with AFSCME,” AFSCME being the largest national government worker union outside of the teachers’ unions. The group’s funding tells a similar story of close alignment with organized labor: The Food Chain Workers Alliance (FCWA) reports making a contribution to Pioneer Valley Workers Center; FCWA members include national labor unions, among them the Teamsters.

Maybe his second example is less tied to Big Labor. Lehrer suggests that the Freelancers Union “deserve[s] support from the highest levels of the administration.” The administration should approach such support with extreme caution; Freelancers Union founder Sara Horowitz has deep ties to Big Labor and institutional left-progressivism. She co-founded the think tank Demos, worked as a union organizer, and received a fellowship from the left-of-center MacArthur Foundation. In a 2010 interview, Horowitz dismissed claims Freelancers Union was “not a real union,” telling Harvard Magazine that her “new form of unionism is implementing traditional labor strategies of using the market power of large groups to help freelancers access better benefits, and it’s organizing this decentralized group into a constituency capable of powerful collective action.” And just as with traditional “big labor,” some members of the Freelancers Union have questioned the value of its products: In 2013, Horowitz faced criticism for customer complaints against Freelancers Union’s associated health insurer.

First, both the federal Department of Labor and the state of California (where UFW is most active) recognize UFW as, well, an old-fashioned labor union (and a member of Change to Win, the union federation and strategic organizing center led by the Service Employees International Union and International Brotherhood of Teamsters, who launched Change to Win because they found traditional labor unions insufficiently aggressive in their attacks on businesses). While the federal National Labor Relations Act (NLRA) does not set terms for collective bargaining in the agricultural industries, the state of California has its own Agricultural Labor Relations Act (ALRA), expanding NLRA-style collective bargaining to farms in that state.

To make matters worse, the ALRA has a “mandatory arbitration” provision, and it was under that provision that Gerawan employees discovered in 2012 that they were actually forced to join the UFW, based on a representation vote held twenty years before and which the UFW had not exercised in over a decade. The Gerawan employees held a decertification vote in 2013. It then took five years, including employee protests in Sacramento demanding that their decertification votes be counted, to ultimately oust the UFW as bargaining representative. So much for “labor organizations that don’t coerce.”

It may be reasonable to consider alternative methods of worker representation. But on the evidence of the organizations presented by Lehrer to the readership of National Review, the current network of “worker centers” and labor unions are no friends of conservatives or of employees who do not want to face Big Labor-style coercion.