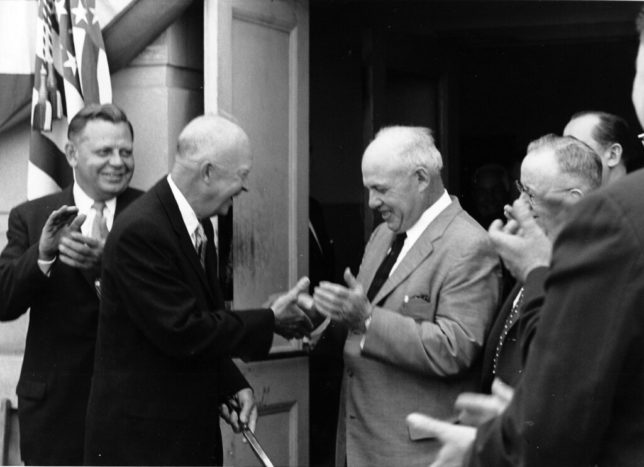 (The Kheel Center for Labor-Management Documentation and Archives in the ILR School at Cornell University is the Catherwood Library unit that collects, preserves, and makes accessible special collections documenting the history of the workplace and labor relations. www.ilr.cornell.edu/library/kheel)
by Michael Watson

For a certain conservative figure—usually a nationalist-populist, often traditionalist in religion, and generally disappointed by conservatives’ long-standing rhetorical embrace of free markets—the private-sector union movement provides an enticing alternative to the support of their supposedly decadent hated nemeses the libertarians and venal business interests. But while conservatives and Republicans command substantial (if minority) support among labor union members and their families, the “Eisenhower Option” (the hope that strengthening labor unions themselves—as defined by commentator James P. Pinkerton—will earn conservatives the support of Big Labor as an institution) is self-destructively naïve.

The Eisenhower years, when the Republicans had a “labor statesman” (who goes unmentioned in Pinkerton’s piece) by the name of Dave Beck, are an interesting place to start. Beck was president of the International Brotherhood of Teamsters; in keeping with the union’s traditions, he was profoundly corrupt, diverting dues money through a cut-out consultant to procure golf clubs, boat motors, and furniture (among other things) for himself. The criminal activities of Beck and his infamous successor, the Mob-tied Jimmy Hoffa, led to the passage of the Labor Management Reporting and Disclosure Act of 1959 with support from then-Senator John F. Kennedy, work from then-Senate staffer Robert F. Kennedy, and the signature of President Eisenhower. So the 1950s were not all sweetness and light for labor unions (to say nothing of the members whose dues were lining the pockets of Beck, Hoffa, et al.).

What the right-wing supporters of unionism fail to see is that the Teamsters (and similarly situated private sector and building trades unions) are institutionally far more aligned with the “woke” or “New” Left than their industrial-era forebears. Consider the Teamsters, if only because of the union’s historical Republicanism and Republicans’ periodic failed 21st-century courtships of the Marble Palace. The most notable alignment that the Teamsters Union has is with the Service Employees International Union, a supporter of cultural progressivism not only at the ballot box but also in legal proceedings and through its financial support. The SEIU and Teamsters are the two most prominent unions in the Change to Win labor federation and strategic organizing center; Teamsters president James P. Hoffa (son of Jimmy) is chairman of the alliance while SEIU president Mary Kay Henry is secretary-treasurer.

Given that institutional alignment, it should not be surprising that—like the SEIU—the Teamsters Union supports a number of policy and advocacy areas that should give a populist or a social conservative pause:

Immigration? Teamsters Joint Council 16 declared itself a “sanctuary union” that would not co-operate with federal immigration authorities and the union’s national headquarters joined an SEIU amicus brief demanding the reinstatement of the legally questionable Obama administration-era “Deferred Action for Childhood Arrivals” program that gave legal status to certain illegal immigrants.

Pro-life? The California Teamsters lobbied the state to pass a special incentive package to lure film production from Georgia after the Peach State passed strict limits on abortion, and long-time National Abortion Federation leader Vicki Saporta got her start in the Teamsters back in the 1980s, rising to become the union’s top organizer.

Conservatives aren’t wrong to see certain union members and their families as potential subjects for outreach; their support helped elect President Donald Trump, who did better with “union households” than any Republican in decades, according to exit polling. But building up the institutions that purport to represent those households is folly; they are too intertwined with the rest of the left-wing coalition—in staff, funding, and ideology—to be trusted to protect conservative interests.