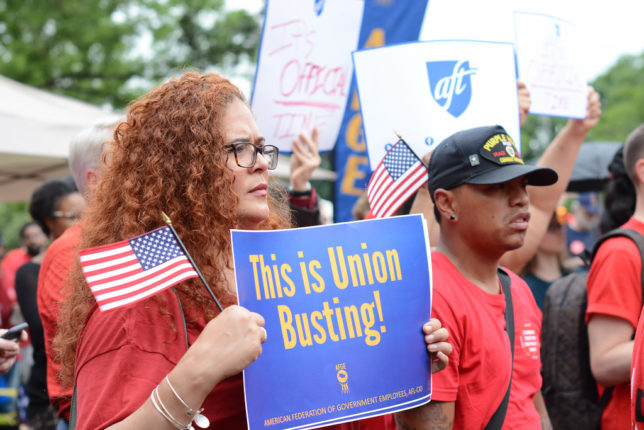 This week, the House Education and Labor Committee (since 2019 a source of numerous very bad ideas for American labor and employment policy) is considering a pair of bills that government worker unions are pushing in response to the fallout from last year’s Supreme Court decision in the case of Janus v. AFSCME. In Janus, the Supreme Court freed government workers from paying mandatory agency fees to labor unions.

But the “Public Safety Employer-Employee Cooperation Act,” would establish collective bargaining for all police and other public safety workers and require states and municipalities to “bargain over hours, wages, and terms and conditions of employment.” Another similar bill, the “Public Service Freedom to Negotiate Act,” would extend that to all government employment.

The problems with government worker collective bargaining are numerous. Even President Franklin Roosevelt, who signed the extremely pro-union Wagner Act governing private-sector organizing, wrote to an organization of civil servants saying, “All Government employees should realize that the process of collective bargaining, as usually understood, cannot be transplanted into the public service”.

And while conservatives and libertarians are aware of the costs to public finances that guaranteeing special privileges to organized government workers creates, liberal politicians are backed by tens of millions of dollars in government worker union support in part precisely because they want to expand government’s role (and the attendant government payroll.)

But pandering to government worker collective bargaining comes at a cost to sincere liberals as well—a cost that should impel them to reconsider the wisdom of mandating collective bargaining for government workers from the federal level. It is well documented that correctional officers, police, and sheriffs’ unions are an impediment to reforms of police conduct and prison conditions and ensuring that unfit officers are not handed badges, guns, and state power.

Examples abound. A Hawaii police union secured reinstatement and back pay for an officer fired for alleged domestic assault; the officer was subsequently arrested after another allegation of domestic violence. Philadelphia’s police union sued to force the city’s district attorney’s office to stop preventing police alleged to have committed misconduct from testifying. The head of the national Fraternal Order of Police union called opposition to the controversial doctrine of civil asset forfeiture, which allows police to seize property even without a conviction, a “fake issue.” (The Supreme Court disagreed. In 2018 the court decided unanimously to curb the practice.) This is not an exhaustive list.

The problems with police bargaining are the same as apply to bargaining in any other government employment. The union negotiates in the narrow interests of its members, even when that interest conflicts with the public interest. And union political power ensures that there is a strong likelihood that a government worker union will not only negotiate for itself but negotiate with a political class it literally empowered. If Democrats, hunting for the favor of big government worker unions like AFSCME, the American Federation of Teachers, and the National Education Association succeed in forcing collective bargaining from the federal level, reform efforts those politicians otherwise support will be imperiled.