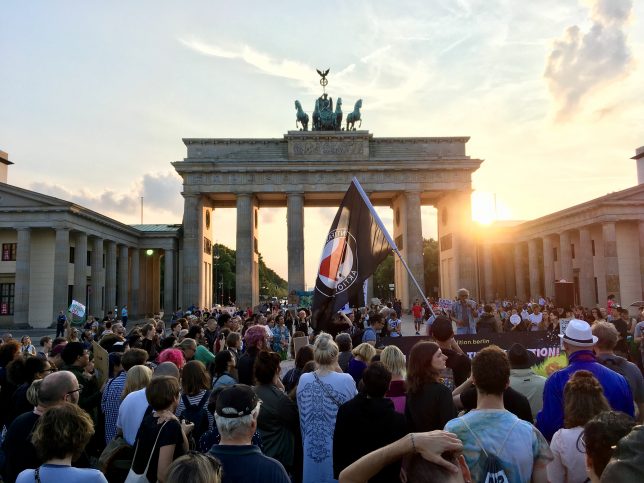 Antifa activists in Germany have published a booklet that instructs and encourages their supporters to become “riot tourists” in Germany by violently attacking political party offices and war memorials, and by setting automobiles on fire.

Their American counterparts are slightly ahead of them. The new German publication comes in the wake of Antifa professor Mark Bray’s book last year titled Antifa: The Anti-Fascist Handbook.

Bray was a lecturer at Dartmouth College who describes himself as “a political organizer and historian of human rights, terrorism, and political radicalism in Modern Europe.” He is also the author of the 2013 book, Translating Anarchy: The Anarchism of Occupy Wall Street, and was a spokesman for the Occupy Wall Street movement in 2011. Last year on C-SPAN he justified Antifa’s violence by labeling it “preemptive self-defense.”

Bray’s school did not stand behind him, an anomaly in this era of political correctness. Dartmouth President Philip J. Hanlon condemned Bray on Aug. 21, 2017, for “supporting violent protest” which was “contrary to Dartmouth values.” Bray is now a Professor of Comparative Education in the Comparative Education Research Centre at the University of Hong Kong.

In Germany, “Augsburg for Riot Tourists” was published in time for the May convention in Augsburg conducted by Alternative for Germany (AfD), the second-largest party in Germany.

“The 44-page booklet was posted to the notorious Indymedia web platform that previously hosted the now-banned Linksunten website, which also posted tutorials on sabotage and other acts of terror and violence following last year’s riots at the G20 meeting in Hamburg,” Breitbart News reported.

In the booklet and on its website, the German Antifa group urged “a revolt against the German collective on the occasion of the AfD party conference in Augsburg.”

“Not only do we want to fight the AfD, we also want to direct our riot against every war memorial, against every repressive authority of the state, against every party bureau of a racist party, against any collaborator of a resurgent fascism,” the group stated.

On their website, German Antifa explain how “to make paint bombs with traditional Christmas baubles and glass bottles, create traps for cars by laying down planks of wood with nails sticking out of them, and how to set cars on fire.”

“We wish you a lot of fun trying them out,” the website states. Targeting “collaborators” such as police stations, army barracks, and a public library, is also encouraged.

The instructions for violence are credited to “Prisma”, a notorious far-left terror manual that calls on extremists to commit violence and shows detailed diagrams on building firebombs, sabotaging infrastructure, and avoiding police. The blog site also provides direct links to the Prisma terror document.

The U.S.-based Antifa movement, which has been described as a revolutionary communist-anarchist militia movement that aspires to forcibly overthrow the United States government, traces its roots to Weimar and Nazi Germany. (Capital Research Center produced a three-part documentary series, America Under Siege, about Antifa and other radical political actors.)

Antifa is not a single organization: it is a movement or coalition of leftist groups, each of which claims to combat “fascism,” a political ideology with a nebulous definition. The word Antifa itself is a truncation of anti-fascist.

Antifa has gained new prominence in the post-Obama era. They trace their roots back to Nazi Germany when earlier iterations of their group battled Nazi stormtroopers in the streets. Like the stormtroopers, they also used violence to intimidate political opponents and break upmeetings and rallies.  Arguably, the ideological distance between Antifa and the now-defunct National Socialist German Workers’ Party or Nazi Party, is so slight it can be measured in millimeters.

Antifa activists are unashamed of their blood-soaked past and present. It was only a matter of time before they began publishing manuals on fomenting revolutionary violence.