Anti-Marxists on the March 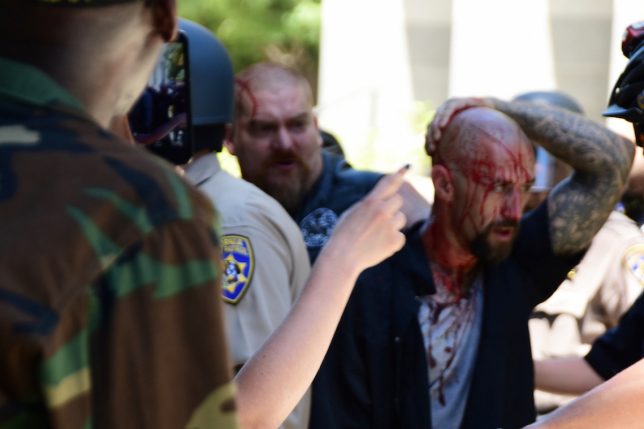 The American Left may have lost the U.S. presidency to Donald Trump, but its militant wing appears determined to turn a drubbing into total collapse.

The leftist militant group By Any Means Necessary (BAMN) is preparing to strike against a scheduled march in the battlefield known as Berkeley, California. BAMN plans to halt a supposed neo-Nazi rally – except that these “fascists” aren’t really fascists at all. They’re not even necessarily from the Right. In fact, the rally’s organizer, Amber Cummings, is a transgender woman who describes herself as a “trans patriot.” Her rally is called “No to Marxism in America.” From a story by KTVU:

“It’s a free speech rally,” [Cummings] told the crowd, describing her rally, where she expects about 300 people to attend. “Marxism is being taught at UC Berkeley and anti-American thought. I’m not safe to walk down road with [an] American flag.”

Cummings resents being labelled “right-wing.” She later commented on a Facebook post, “The Alt Left is not to [sic] bright, but in all fairness neither is the Alt right. Both are idiots.”

That is unlikely to stop the agitators at BAMN from disrupting the rally, however. BAMN, founded in 1995 by the Trotskyite Revolutionary Workers League, has a sordid history of its own – a fact that doesn’t seem to dismay its members. Earlier this year Yvette Felarca, a BAMN leader and Berkeley middle school teacher, was charged with inciting a violent riot in Sacramento, California. BAMN was also one of the groups responsible for disrupting speeches by conservative commentators Ann Coulter and Milo Yiannopoulos speech in Berkeley. Disturbingly, the group even sports direct links to the biggest pro-pedophilia group in the United States, the North American Man/Boy Love Association (NAMBLA), according to documents obtained by the Daily Caller.

As Marxist and anarchist groups on the far Left become increasingly active in U.S. politics, an ideology opposed to free speech and diversity of thought has developed. Capital Research Center’s Jake Klein reports that Shaun King, one such activist, has endorsed the violent Antifa movement following the brutality during a lawful white nationalist rally in Charlottesville, Virginia. If American free speech is to survive, free speech for every law-abiding group – regardless of the repugnance of their views – must be upheld.

Tags: By Any Means Necessary (BAMN)