All Above All’s Pro-Abortion Protest 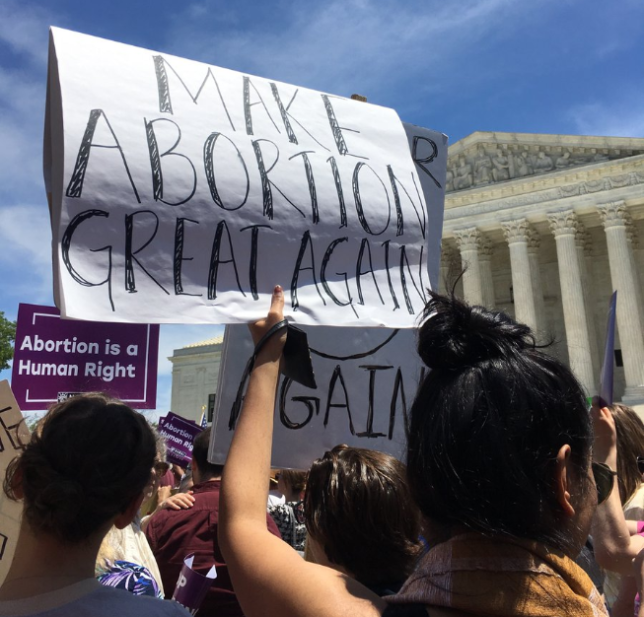 Pro-abortion protesters held a rally outside the U.S. Supreme Court on May 21st to attack what sign-wielding activists deemed the “GOP War on Women.” The protest was largely organized in response to an historic abortion ban passed by the Alabama state legislature earlier this week.

A scope of the size of #StopTheBans rally in DC in front of the U.S. Supreme Court around noon. @capitalresearch pic.twitter.com/eP67mZjQGI

CRC was present to document the event in which participants jeered at a handful of advocates from the pro-life group Live Action who were also covering the protest. Glossy, pre-printed signs bearing slogans such as “Stop Banning Abortions” and “Abortion is a Right” were made available by representatives from a number of pro-abortion, LGBT, and population control groups. CRC identified activists from the following groups at the protest:

From Alabama, to Missouri, to Texas and beyond, Republican legislatures are waging a war to unravel a woman’s fundamental rights. They are responsible for 300 newly proposed restrictions. We are here to send these folks a message, Not! On! Our! Watch!”

New Jersey Sen. and presidential hopeful Cory Booker (D) joined with protesters to chant “it’s time for action.” Rep. Brenda Lawrence (D-MI) said that “this is about men having control over women!”

Rep. Tim Ryan (D-OH) told the crowd that he “find[s] it insulting that some white man legislator is going to accuse a women of infanticide and not caring about these kids,” referring to supporters of legislation restricting abortion. (Ryan himself is white.)

All Above All Action Fund, one of the rally organizers, is a project of the “dark money” group Sixteen Thirty Fund, a 501(C)(4) advocacy nonprofit created and controlled by the philanthropy consulting firm Arabella Advisors. Sixteen Thirty Fund is known to control over 45 such “pop-up” groups—websites designed to look like fully-fledged nonprofits—and is documented in CRC’s dossier, Big Money in Dark Shadows: Arabella Advisors’ Half-Billion Dollar “Dark Money” Network.

All Above All Action Fund pushes for the abolition of the Hyde Amendment, a 1976 ban on federal funding of abortions except in extreme circumstances. The group was a prominent supporter of the EACH Woman Act, a 2017 bill introduced by Rep. Barbara Lee (D-CA) which would have mandated abortion coverage in public health insurance programs such as Medicare, Medicaid, and the Children’s Health Insurance Program (CHIP), while simultaneously barring federal and state authorities from interfering in the way insurance companies choose to cover abortion (a longstanding provision of the Hyde Amendment).

During the rally, CRC’s staff overheard an exchange between the Socialist Workers Party representative and a protester in which the latter declared, “There’s nothing wrong with socialism.” The Socialist Workers Party, which joined but did not organize the event, is a communist group that splintered from the Soviet Union-backed Communist Party USA in the 1930s to support USSR founder Leon Trotsky over Joseph Stalin. Most recently, the Party’s publication The Militant criticized the U.S. as “imperialist” for supporting Venezuela President Juan Guaido over socialist dictator Nicolas Maduro.