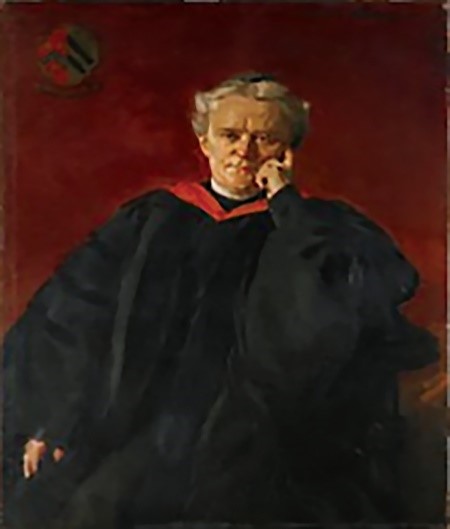 “In the summer of 1869,” according to Agnes Repplier’s 1934 Agnes Irwin: A Biography, “two principals of a girls’ school in Philadelphia were drowned at Bar Harbor. This tragic happening gave Agnes Irwin the opening she sought.”

That Summer, Irwin became principal of the West Penn Square Seminary for Young Ladies after the tragic deaths of the two people who had been governing the school. She “took charge of the school on Penn Square, retaining the former teachers,” according to Repplier. “Everyone said that a good start had been made, but no one dreamed of what would grow from that quiet and modest beginning.”

The formidable Irwin “combined distinction of mind, staunchness of character, and that quality of poise which we are told the world has never loved, but which has preserved it from disintegration under the repeated onslaughts of unwarranted complacency and indiscriminate reform,” according to Repplier, an essayist who attended the school for a time.

To honor how she boldly built the successful school and to perpetuate her legacy, it was later renamed The Agnes Irwin School (AIS). A great-great-granddaughter of Benjamin Franklin, Irwin would become dean of the all-women Radcliffe College in Cambridge, Mass., in 1894. She was “an advocate for the education of girls and young women—a radical concept in her time,” as AIS’s website proudly remarks.

In 1933, the secular AIS moved its campus west to Wynnewood, Penn., and in 1961, it moved farther west on the Main Line to an 18-acre location in Rosemont, Penn. It is among a cluster of similarly genteel private schools in the area, which also includes the all-girls Baldwin School, the all-boys Haverford School, and the co-ed Episcopal Academy and Shipley School.

AIS has pre-kindergarten through 12th-grade classes. It says it offers—and the parents of its students certainly think they buy—a rigorous college-preparatory, liberal-arts curriculum. Annual tuition exceeds $20,000 at the pre-K level and steadily increases by grade to beyond $35,000 at the high-school level. As with almost all such nonprofit schools, of course, many parents also use their wealth to make substantial donations to it.

Everything Rooted in What’s Best for Girls

“Today, Miss Irwin’s legacy serves as our inspiration,” AIS tells these parents, and anybody who’s interested, on its website. “In our Upper, Middle, and Lower schools, everything our students experience is rooted in what’s best for girls: how they learn, how their brains develop, and what their social and emotional needs are.”

“Just call us Agnes Irwin’s superpower,” the school inspirationally says in introducing its special Center for the Advancement of Girls. “Everything we do at The Agnes Irwin School is centered around what’s best for girls, which is why we were intentional about creating” the center. “It’s the force that infuses relevant girl-centered research into the Agnes Irwin educational experience and works to empower girls and young women in our community and beyond.”

In the 1934 biography, Repplier includes what she calls “the clearest insight into” Irwin “and the value of the work she did” from LeBaron Russell Briggs, who was president of Radcliffe for 20 years. “From his point of view her greatest asset was her conservatism; but by this he did not mean her views anent the proper age for reading Fielding and Smollett, or the proper age for returning unchaperoned from Boston concerts,” according to Repplier. “He meant that sagacity which restrains indiscreet partisanship, quiets fatal pugnacity, considers rights, and measures chances.”

Specifically, as quoted by Repplier, Briggs wrote in 1927 of Irwin,

[S]he did one thing—pursued one policy—for which even the most radical of Radcliffe women should be grateful today: she was conservative. Conservative as Philadelphia whence she came, distrustful of untested innovations, maintaining that novelty is not excellent until it can read its title clear, no matter how long a time the reading may require.

In the next installment of Agnes Irwin and Her Legacy, diversity initiatives from college campuses make their way to the idyllic girls’ prep school.